European countries amp up security after deadly explosions in Brussels 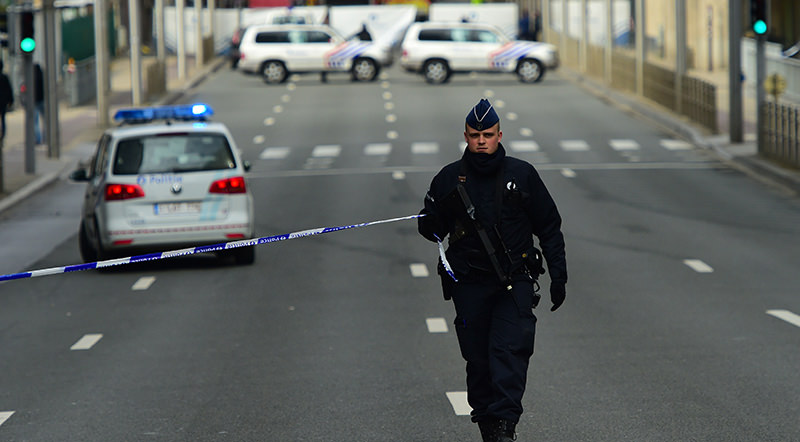 A police officers sets a security perimeter near Maalbeek metro station, on March 22, 2016 in Brussels, after a blast at this station near the EU institutions caused deaths and injuries. (AFP Photo)
by Daily Sabah with Agencies Mar 22, 2016 12:00 am

European countries have increased security measures following explosions at an airport and subway station in Brussels, which killed at least 21 people and injured many others.

Belgium is sending 225 extra troops to Brussels and controls are being carried out at Belgium's borders following blasts.

Belgium security forces tightened security at nuclear plants across the country after deadly attacks in the capital city of Brussels, the Belga news agency said.

"Surveillance is stepped up with added security measures at nuclear plants," the agency reported.

"Vehicles are being checked with police and army on site," the agency added.

"In this moment of tragedy, in this dark moment for our country, more than ever I want to call on everyone to display calm, but also solidarity. We are confronted with an ordeal, a difficult ordeal and we have to face this ordeal by being united," Belgian Prime Minister Charles Michel said.

"Access to public transport will be restricted to people with tickets and/or ID cards," and they may be frisked, he said after a meeting with President Francois Hollande.

Cazeneuve also called on Europe to "further boost coordination and the fight" against terrorism.

"These events that strike at the heart of Europe... show the need to reinforce even more the fight against terrorism," he said.

The minister said French authorities have already prevented 10,000 people from entering the country since the November attacks in Paris that claimed 130 lives.

A spokesman declined to give further details but says the move is part of a series of security measures mounted by police at Germany's borders, airports and train stations.

Meanwhile, The New York Police Department (NYPD) is expected to increase security across New York City in response to attacks in Brussels, a spokesman has said.