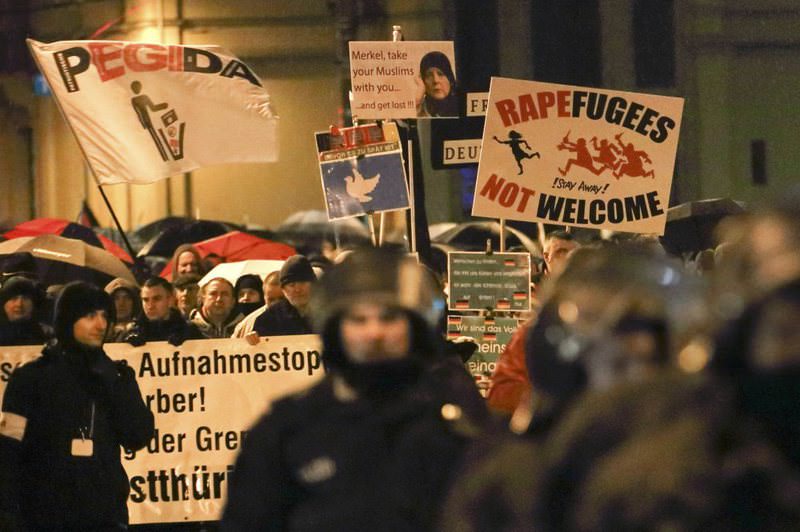 The right-wing populist German party Alternative for Germany (AfD) announced its new program, with a specific focus on criticism of Islam and more emphasis on less migrants, the German N-TV website reported Monday.

The AfD said the party opposes "defamation of criticism of Islam as 'Islamophobia'" and called for a ban of the burqa in both the public and private sector while it said the headscarf should be banned in the public sector. Beatrix von Storch, a party member, defined the migration and Islam as "problems" that affect the people, the Daily Mail reported on Sunday.

In January, the right-wing AfD leader Frauke Petry sparked a backlash after saying that border guards should shoot at refugees and migrants trying to enter illegally, if necessary, as her comments caused outrage from opposing politicians.

The AfD hailed regional elections last week held amid divisions over Chancellor Angela Merkel's liberal approach to the refugee crisis. The AfD, formed three years ago as an anti-euro party but now running mainly on an anti-migrant platform, won 15.1 percent of the vote in Baden-Wuerttemberg, official results showed. It scored about 12.5 percent in Rhineland-Palatinate and 24 percent in Saxony-Anhalt, where it finished second, according to projections by ARD and ZDF television with most districts counted.

The elections in the prosperous southwestern state of Baden-Wuerttemberg, neighboring Rhineland-Palatinate and relatively poor Saxony-Anhalt in the ex-communist east were the first major political test since Germany registered nearly 1.1 million people as asylum-seekers last year.

The AfD party is the chief critic of German Chancellor Angela Merkel's open-door policy towards refugees fleeing war and persecution. Europe's top economy faces a record influx of up to 1 million asylum seekers this year. Founded on a Eurosceptic platform, the AfD has gone through a leadership split and veered further to the right, with some of its leaders voicing support for the anti-Islamic Patriotic Europeans Against the Islamization of the West (PEGIDA) protest movement.

Germany has witnessed anti-immigrant and Islamophobic demonstrations following the record influx of refugees. Several refugee centers were hit by violent protests and arson attacks. In the face of widespread hatred toward Muslims in German society, German authorities, including Chancellor Merkel and President Joachim Gauck, condemned the series of xenophobic attacks.

Anti-immigration ideology and xenophobia have become more visible in the country as a result of the efforts of political parties like the NPD and AfD as well as anti-Islam and anti-immigrant initiatives like PEGIDA, which have staged anti-immigrant rallies and have drawn thousands of people throughout Europe, especially in Germany. Attacks against refugees and asylum centers in Germany have increased sharply over the past year. Officials say there were around 202 such attacks in the first six months of 2015, as many as during the whole previous year. Europe has been witnessing a shift towards right-wing parties, which have been gaining popularity over the fear of a refugee influx. Recently, polls noted a rise in support for right-wing parties in Austria, Poland, France and Switzerland.