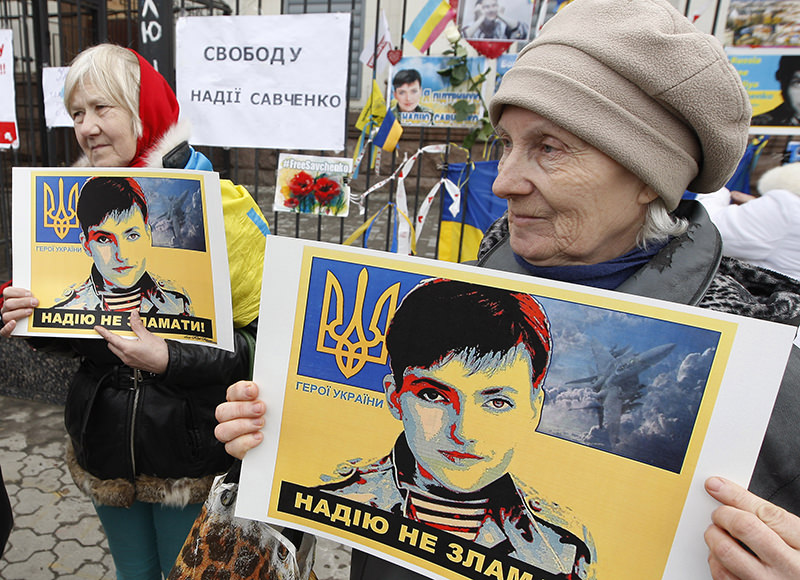 A Russian court sentenced Ukrainian pilot Nadezhda Savchenko to 22 years in jail on Tuesday after finding her guilty of involvement in the killing of two Russian journalists during the separatist conflict in eastern Ukraine.

Ukrainian President Petro Poroshenko said his country would never recognize the verdict of what he called a "kangaroo court" and called on Russian President Vladimir Putin to send Savchenko back home to Ukraine.

Fighting in eastern Ukraine has subsided since a fragile ceasefire was agreed, but Savchenko's trial showed the depth of bitterness that remains. Savchenko, 34, is a national hero in Ukraine but many in Russia see her as a Ukrainian nationalist with the blood of civilians on her hands.

The sentence is likely to prompt protests from the European Union, which has called for Savchenko's release.

Savchenko, who was elected a member of the Ukrainian parliament while awaiting trial, was defiant as the verdict was read out. She climbed onto a bench and sang the Ukrainian national anthem at the top of her voice.

Savchenko, who wore a T-shirt bearing the Ukrainian trident, a state symbol, has denied having anything to do with the deaths of the journalists.

Poroshenko said after the verdict: "Ukraine will never - I repeat, never - recognize either the kangaroo court of Nadezhda Savchenko, nor its so-called sentencing."

He said Putin had promised him some months ago that he would return Savchenko to Ukraine once the trial was over.

"The time has come to fulfill that promise," Poroshenko said in a statement. "In turn, I am prepared to hand over to Russia the two Russian servicemen captured on our territory for taking part in armed aggression against Ukraine."

Russian officials have previously signaled they would be willing to consider a prisoner exchange.

Only Putin can decide whether Russia will trade Savchenko with Kiev, the Interfax news agency quoted Dmitry Peskov, a Kremlin spokesman, as saying on Tuesday.

At the hearing in southern Russian, judge Leonid Stepanenko, between shouted interruptions by Savchenko, dismissed her lawyers' arguments that she could not have been involved in killing the journalists.

"The evidence provided by the prosecution side is trustworthy and completely disproves the theory of the defense about Savchenko's innocence," the judge said.

He said the court had decided "to select as the final punishment for Savchenko 22 years of confinement of liberty with a fine of 30,000 rubles ($442)."

The sentence was one year less than the term prosecutors had sought.

Asked by the judge if she understood the sentence, Savchenko stood on a bench in the cage where she was being kept and began singing the Ukrainian national anthem. Her supporters in the courtroom joined the singing and tried to unfurl a blue-and-yellow Ukrainian flag, before security staff bundled them out.

Savchenko, who had taken leave from her job as a military pilot to volunteer with Ukraine's ground forces fighting against the separatists in eastern Ukraine, was captured by pro-Moscow rebels there in June 2014.

She was handed over to Russia where she was charged with directing mortar fire which killed the two Russian journalists who were covering the conflict.

She has repeatedly gone on hunger strike, and says she is the victim of a show trial aimed at humiliating Ukraine.

During the trial, angry Ukrainians have pelted the Russian embassy in Kiev with eggs over her plight, while Russians have picketed the Ukrainian embassy in Moscow demanding justice for the dead journalists.