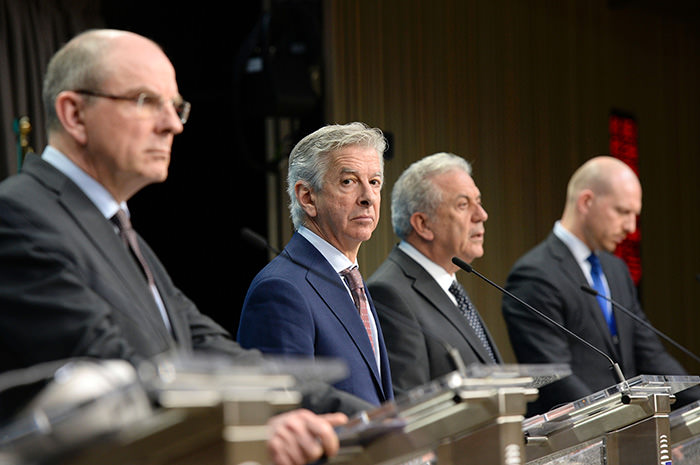 (From L) Dutch Interior Minister Ronald Plasterk, Belgian Justice Minister Koen Geens, and European Union Commissioner for Migration and Home Affairs Dimitris Avramopoulos (AFP Photo)
by Compiled from Wire Services Mar 24, 2016 12:00 am
European justice and home affairs ministers on Thursday called on the European parliament "as a matter of urgency" to adopt an agreement that would allow authorities to exchange airport passenger data.

The ministers issued a statement of solidarity with Belgium following an emergency meeting. The joint statement condemned the "horrific terrorist acts" on Tuesday in Brussels and described them as "an attack on our open, democratic society."

The passenger data issue has long disturbed privacy campaigners, and figures large in the debate over security versus liberties.

The United States has long pushed for better data sharing, but Europeans have balked over privacy issues.

Under the passenger data deal, details would be collected from European carrier flights entering or leaving the EU, as well as from flights between member countries. Charter flights will be included, and all the information will be kept on file for six months.

The so-called passenger name record agreement proposal was first made in 2007, and it has languished in the European Parliament for more than two years as EU lawmakers struggled to strike the right balance between security concerns and people's privacy rights.
Last Update: Mar 24, 2016 11:32 pm
RELATED TOPICS