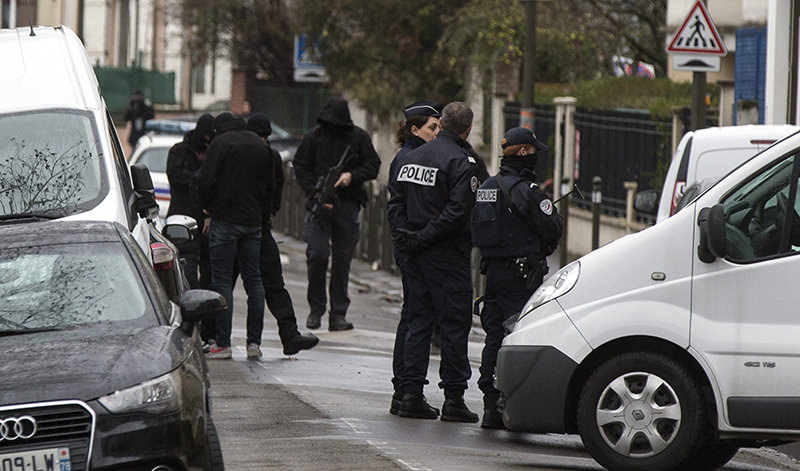 Police officers and investigators stand outside a building where an anti-terrorism operation took place in Argenteuil, near Paris, 25 March 2016 (EPA Photo)
by Compiled from Wire Services Mar 25, 2016 12:00 am

Belgian police captured a suspect carrying what a broadcaster said was a suitcase full of explosives on Friday, after shooting him in the leg during a major police operation following Tuesday's suicide bombings in Brussels.

The prosecutors said in a statement they had detained three people in Brussels on Friday in relation to the French attack plot, naming them as Tawfik A., Salah A., and the third, unnamed man taken in the Schaerbeek operation.

The three were detained following the arrest in France of Reda Kriket, a 34-year-old Frenchman sentenced to 10 years in Brussels in absentia in July as part of an extremist recruiting network dubbed the Syrian Connection.

Two of the three -- Tawfik A and the man detained in Schaerbeek -- were wounded in the leg, the statement said.

Witnesses told local media police had shot the man in the leg at a tram stop after he failed to respond to their orders. One witness told RTBF the man had a girl of about eight with him.

"I heard two explosions, they were shooting. I opened the window and saw a man lying near the tram stop. The police ordered him to show his hands, remove his jacket. They said that if he did not comply, they would use their weapons," a witness who lives nearby told La Libre newspaper.

Video from the scene showed the man lying on his side, shattered glass from the tram shelter smashed by bullets at his feet. A bomb squad robot approached the wounded man, checking for explosives.

Armed police launched the major new raid in Brussels in the wake of the suicide attacks, in the Schaerbeek area of the capital, a day after six suspects were arrested over the carnage.

Three blasts could be heard, which the local mayor Bernard Clerfayt said were controlled explosions.

The site of the raid is in the same district from where three airport attackers left on Tuesday morning carrying suitcase bombs, although only two went off.

Police earlier this week found a large stash of explosives in an apartment in Schaerbeek believed to have been used by suicide bombers in Tuesday's attacks.

Daesh suicide bombers hit Brussels airport and a metro train on Tuesday in the worst such attack in Belgian history. Investigators believe those attacks were carried out by the same cell responsible for November's gun and bomb attacks in Paris.

The Belgian federal prosecutor's office said six people were held in Brussels on Thursday, of whom three were released and three were remanded in custody facing possible charges. They are still holding Faycal C., Abou A. and a third unnamed person.

Germany's Der Spiegel magazine said German police had arrested two people, one of whom had received phone messages with the name of the metro station bomber and the word "fin" -- French for "end" -- three minutes before the metro blast. The German interior ministry declined immediate comment.

A person familiar with the investigation in Belgium said one of the people arrested there was believed to be a suspected accomplice caught on security camera footage with the metro station bomber.

"We have strong indications that this is the suspect who was hunted for the last couple of days. The identification is still ongoing," the source said. However he said those arrested before midday on Friday did not include a third suspect seen on video alongside the two who blew themselves up at the airport.

In Paris on Thursday, authorities arrested Kriket, a French national suspected of belonging to a militant network planning an attack in France. French officials did not directly tie that plot to the Brussels attacks, but Clerfayt, the Schaerbeek mayor, said the man wounded on Friday was linked to both investigations.

Interior Minister Bernard Cazeneuve said in a televised address that Kriket's arrest helped "foil a plot in France that was at an advanced stage".

A police source said investigators found acetone peroxide explosives in an apartment in a Paris suburb after the arrest.

Belgian Prime Minister Michel rejected resignations offered by his interior and justice ministers on Thursday over a failure to track one of the airport bombers, Ibrahim El Bakraoui, 29, who had been expelled last year by Turkey as a suspected fighter. Bakraoui's brother Khalid, 26, was the bomber who struck Maelbeek metro station.

Investigators also established on the basis of DNA tests that Naijm Laachraoui was one of the suicide bombers that blew himself up in the Brussels airport on Tuesday, killing at least 10 people there.

The Brussels attacks came a week after Belgian police killed a militant during a house raid that led them to Salah Abdeslam, the only suspected participant in the Paris attacks to have been captured alive. His lawyer says he has been cooperating with the investigation but did not know about plans to attack Brussels.

Belgian daily De Morgen said investigators had identified a new suspect they believe played a role in the Brussels bombings, 28-year-old Syrian Naim al-Hamed. The paper said he was on a list circulated to the security services of other European countries after Tuesday's attacks, and was also suspected of involvement in the Paris attacks.

Daesh posted a video on social media calling the Brussels blasts a victory and featuring the training of Belgian militants suspected in the Paris attacks.