Terror linked with migrants once again after deadly Brussels attacks 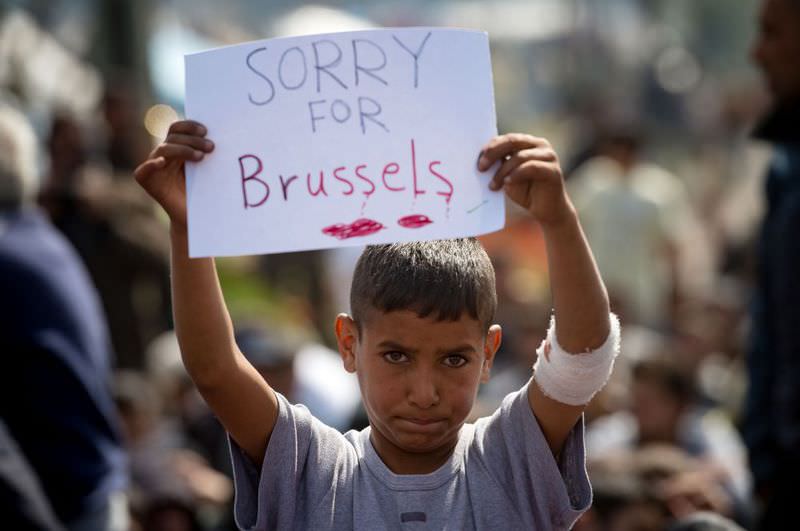 A migrant boy holds a placard expressing sympathy for the victims of the terror attacks in Brussels during a protest at a makeshift camp at the Greek-Macedonian border near the village of Idomeni on March 22.
by Daily Sabah with Wires Mar 25, 2016 12:00 am

Similar to previous extremist attacks in Europe, the deadly attacks in Brussels have brought refugees, and Muslim communities in particular, under the spotlight. Despite warnings from European political figures, there have still been xenophobic remarks

As another extremist attack, claimed by DAESH, hit the heart of the European Union and killed at least 31 people, the bitter debate about the influx of refugees and migrants has come under the spotlight once again. A day after the attacks, Australian Prime Minister Malcolm Turnbull accused Europe of allowing security to slip, hinting at the wave of migrants who have flooded the continent, many of them from Syria, while Poland said they would not allow refugees to enter the country. Across the Atlantic, United States Republican presidential candidate Ted Cruz urged authorities to monitor Muslim neighborhoods more closely.

A similar situation was experienced after the Nov. 13 Paris attacks, which was also claimed by DAESH, that killed 130 people. Despite warnings from European political figures not to target Muslims or refugees because of the attacks, there was fear of repercussions. Meanwhile, Europe's populist right rushed to demand an end to an influx of refugees from the Middle East in the wake of the attacks.

Polish Prime Minister Beata Szydlo on Wednesday said Warsaw would not take in its share of migrants under an EU plan because of the terrorist attacks in Brussels.

Poland is the first EU member to take such a step after Tuesday's bombings at the Brussels airport and subway, which also left 270 wounded, including three Poles. "After what happened in Brussels [on March 22], it's not possible right now to say that we're OK with accepting any number of migrants at all," Szydlo told Superstacja, a private TV channel. Her conservative and Eurosceptic Law and Justice (PiS) government had earlier been willing to welcome the 7,000 refugees agreed by its liberal predecessors under Ewa Kopacz.

The first refugees were due to arrive in Poland in late March or early April, after EU leaders forced through a one-off controversial deal last September to relocate 120,000 refugees among member states. After the attacks in Brussels and earlier in Paris, "I regret to have to say that the EU is not drawing lessons from what is happening," she added.

Across Europe, there has been a shift toward right-wing parties, which have been gaining popularity over the fear of a refugee influx. Recently, polls noted a rise in support for right-wing parties in Austria, Poland, France and Switzerland, and xenophobic comments by political figures have become more visible, including the leader of the German right-wing party Alternative for Germany (AfD) who said the border guards should shoot at migrants if they try to enter illegally.
RELATED TOPICS