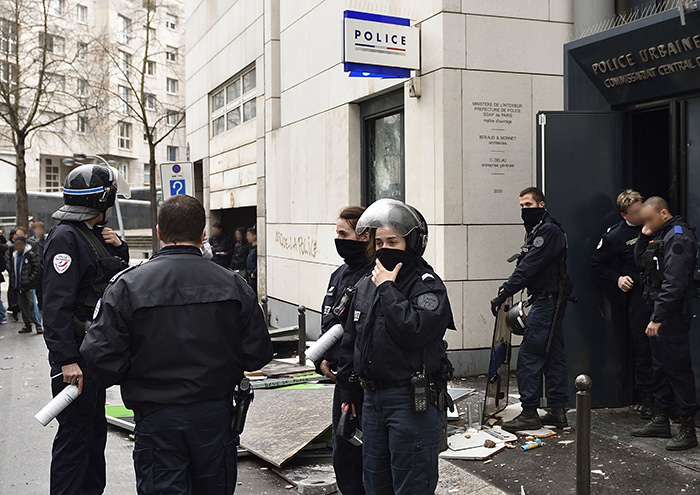 |AFP Photo
by Daily Sabah with AFP Mar 25, 2016 12:00 am
A video of a police officer punching a teenager sparked fury in France on Friday, with high school pupils staging violent protests outside police stations in the capital.

The video shows two policemen holding up a 15-year-old boy while another violently punches him, on the sidelines of student protests Thursday against proposed labour reforms.

The boy, attending a protest in Paris, was lying on the floor surrounded by the police when one of them shouted at him to get up before punching him.

We were protesting, throwing eggs. A policeman ... charged at me, hit me to the ground then he told me 'get up, get up' and he punched me ... my head was spinning," the boy told local media.

The youngsters tried to smash the reinforced windows of one station with planks of wood, while one had also scrawled "Death to cops" on the wall, an AFP journalist reported.

Police allowed the youngsters to leave the area before stationing riot police out front.

Student protests were held across France on Thursday against proposed labour reforms which saw cars torched in the capital and clashes with riot police, who responded with tear gas and made dozens of arrests.

Two policemen were injured in the violence.

Dozens of the injured boy's fellow pupils gathered for a quiet demonstration Friday outside his Paris school.

"I was shocked," said Brelotte, 15. "The policeman's punch was too much. He was on the floor and under control, what was the point?"

The Paris prosecutor has opened an investigation into the incident.

"These images are shocking and shocked me," said Cazeneuve.

Paris police chief Cadot said: "If there was an error, it will be punished.

"There was no doubt provocation from the students but this doesn't justify security forces not controlling their behaviour, that is what makes the job difficult," he said.

Police 'at the end of their tether'

Police in France saw an unprecedented surge of support in the wake of terrorist attacks last year.

But questions over the rough treatment of people raided in counter-terrorism raids had already started to reduce sympathy, and the resumption of strikes and protests over a number of government policies has put French police back in the firing line.

Nicolas Comte, secretary general of the SGP police union, told BFM TV that many police officers were fraying at the edges in France after months of protests and the constant terror threat.

"The two issues should not be linked, but with all that has happened, in terms of protests and the terrorist threat, my colleagues are very tired and at the end of their tether," he said.

"I am not excusing it but this could explain things," he said.

Tensions between youths and police provoked violent riots across France in 2005.

Meanwhile, in recent years similar clashes have taken place in the United States between police and demostrators, who are claiming that police discriminates against African Americans and other minorities.

U.S. witnessed nationwide protests against police brutality, which first took place in Ferguson, Missouri over the death of Michael Brown, 18, who was fatally shot by a police officer in August 2014, and later in Baltimore in the wake of peaceful demonstrations over the death of Freddie Gray, 25, on April 19, 2015, questions have been raised regarding the existence of systemic injustice and racial discrimination against people of color in the U.S.

In Baltimore, violent clashes took place between police and angry crowds on Baltimore's streets after funeral of Gray, a 25-year-old black man who was fatally injured while in police custody.

Similar events took place in Ferguson, Missouri when Michael Brown, an 18-year-old African-American male, was shot dead after an altercation with Darren Wilson, a 28-year-old white male Ferguson police officer. Wilson was not indicted by a grand jury on any criminal in relation to killing Brown. During the Ferguson protests, many police officers and the demonstrators were injured.