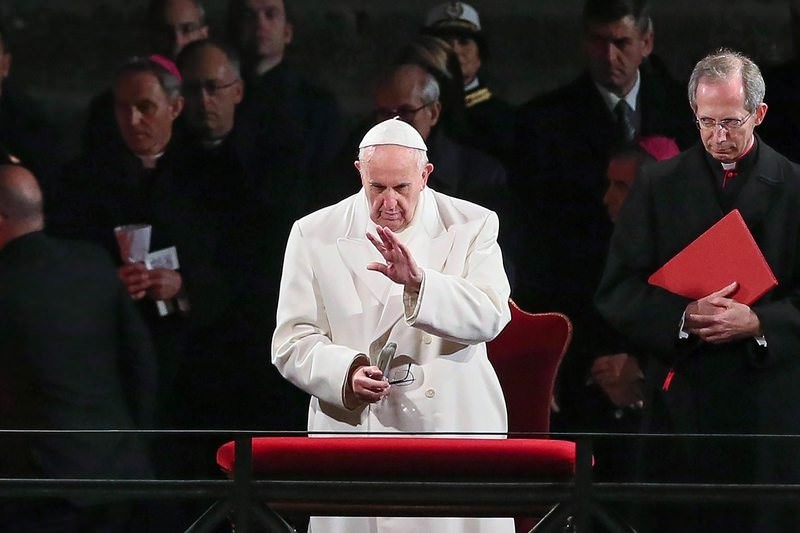 Pope Francis decried what he called Europe's "indifferent and anaesthetized conscience" over migrants, during Good Friday prayers in Rome during which he also slammed paedophile priests, arms dealers and fundamentalists.

Tens of thousands of Catholic faithful gathered for the service, many clutching candles in the imposing surrounds of the city's famous Colosseum, where thousands of Christians are believed to have been killed in Roman times.

"O Cross of Christ, today we see you in the Mediterranean and Aegean Seas which have become insatiable cemeteries, reflections of our indifferent and anaesthetized conscience," the 79-year old pontiff said, referring to the thousands who set off in unseaworthy boats to reach Greece and the rest of Europe.

Francis has long called for the global community to open its doors to refugees and fight xenophobia.

The Argentine pope did not spare his own Church, fiercely denouncing paedophile priests whom he described as those "unfaithful ministers who, instead of stripping themselves of their own vain ambitions, divest even the innocent of their dignity".

The Roman Catholic Church continues to be dogged by cases of predatory priests and past cover-ups. Just this month a French cardinal faced calls to resign over allegations he promoted a cleric who had a previous conviction for sexual abuse.

In the wake of this week's deadly attacks in Brussels, Francis slammed "terrorist acts committed by followers of some religions which profane the name of God and which use the holy name to justify their unprecedented violence".

The pope added it was "arms dealers who feed the cauldron of war with the innocent blood of our brothers and sisters" and raged against "traitors who, for thirty pieces of silver, would consign anyone to death".

Francis also evoked the expressions on the faces of children fleeing war "who often only find death and many Pilates who wash their hands" -- a reference to Pontius Pilate, who, according to Christian tradition, said he was bowing to public demand in ordering Jesus's crucifixion, in a bid to shrug off personal responsibility.

In his wide-ranging diatribe, the head of the Roman Catholic Church lashed out at persecutors of Christians in particular, lamenting "our sisters and brothers killed, burned alive, throats slit and decapitated by barbarous blades amid cowardly silence".

He also turned a steely gaze on Western cultures, talking of "our egotistical and hypocritical society", which casts off the elderly and disabled and lets its children starve.

During the service, a small group of believers carried a cross between 14 "stations" evoking the last hours of Jesus's life during the traditional Via Crucis (Way of the Cross) procession, amid visibly heightened security at the former gladiator battle ground.

Sitting under a red canopy next to a large cross, Francis listened earlier to a lengthy meditation written by Italian Cardinal Gualtiero Bassetti, who spoke of the darkest moments of humanity, where belief in God is most deeply shaken.

Good Friday is the second of four intensive days in the Christian calendar culminating in Easter Sunday, commemorating Christ's resurrection.

On Saturday, the pontiff will take part in an evening Easter vigil in St Peter's Basilica, before celebrating Easter mass on Sunday and pronouncing the traditional "Urbi et Orbi" blessing to the world.