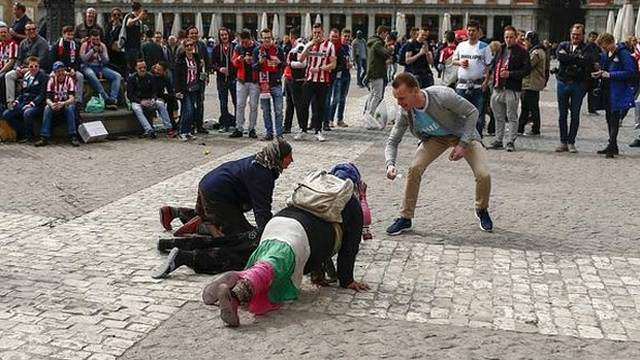 by Daily Sabah with Agencies Mar 26, 2016 12:00 am
The six PSV Eindhoven fans who threw money at refugees in Madrid's Plaza Mayor and humiliated them have been given stadium bans varying from 12 months up to 36 months, General Manager Toon Gerbrands announced on Thursday.

In a statement the club said: "Stadium bans have been given to those who have brought the club's name and reputation into disrepute. A 36-month ban is the maximum penalty. All the persons involved have accepted their sanction."

PSV also blocked the season tickets for the six fans for an indefinite time.

Gerbrands said: "PSV has made it emphatically clear that it disassociates itself from the Madrid incidents, as they are contrary to the moral values and ethical norms that the club adheres to. We feel we have done all we could to track down the culprits and we now want to close the Madrid chapter. We will do our utmost from now on to regain the good reputation in Europe."

A Youtube video surfaced on March 15 showing fans of the Dutch football team PSV Eindhoven throwing change to refugees which quickly drew ire against the fans for their disrespectful behavior towards the refugees.

The video shows the fans throwing money from the patio of a bar at the Plaza Mayor in Madrid and mocking refugees as they desperately scrambled to scoop up the coins.

The incident took place ahead of a game between Atletico Madrid and PSV Eindhoven.

Spain's interior minister Jorge Fernandez Diaz had described the scenes as "an absolute disgrace" while the president of the Madrid regional government Cristina Cifuentes was outraged by the "lamentable" behavior".

"I feel ashamed that in Madrid -- even if the hooligans are from a foreign team -- we see such scenes. It's not only racism but an absolute lack of humanity."

PSV played against Atletico in the second leg of the Champions League round-of-16 at the Vicente Calderon. Atletico won 8-7 on penalties and went on to the quarter finals.