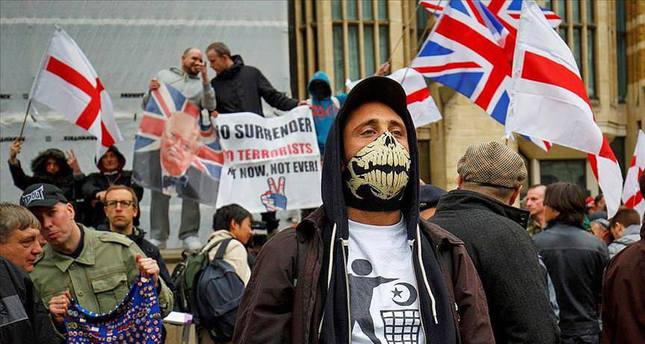 As the migrant influx into Europe remains the biggest crisis facing the European Union, far-right parties and organizations across the continent are taking advantage of the situation to increase their profile.

Far-right and fascist organizations in the United Kingdom are no exception, stepping up Islamophobic and anti-European Union activities in the wake of terror attacks in Paris and Brussels as well as attempting to take advantage of a possible British withdrawal from Europe in a June referendum.

Victoria Brittain, an author and former foreign editor of The Guardian, thinks those actions are to "mainly encourage the existing groups to feel they are visible." "I don't think they actually have much impact [on] spreading a negative message against Muslims because these groups are so unattractive and extreme in their self-presentation [that] they don't bring in new people much," Brittain told Anadolu Agency (AA).

However, a deputy director of TellMAMA – a nonprofit nongovernmental organization that records all anti-Islam activities in the U.K. – thinks differently. "While the numbers remain small, groups like Britain First will film their activities, no matter the size, and upload content to drive up web traffic and possible party membership or donations," Iman Abou Atta told AA. "A recent protest in Dover brought together a number of hardened white supremacists and fascists from the National Front, North West Infidels, National Action, Misanthropic Division, Scottish Defence League [as well as] fascists in Wales. This rare show of unity demonstrated their capacity for violence and public disorder," she added.

Among the political parties campaigning for a British exit from the EU are a number of far-right groups. The English Defence League (EDL), PEGIDA U.K., Britain First, the British Freedom Party, Blood and Honour and the British National Party are all openly supporting a possible "Brexit" and have ramped-up anti-Muslim rhetoric, taking advantage of the huge refugee crisis Europe has had to face.

A recent report by the Cordoba Foundation think think suggests that there has been a cynical switch in the target of hate for extremist groups, claiming: "Traditional far-right movements have often emphasized anti-Semitic conspiracy theories; more recently, they have focused [on] anti-Muslim narratives." Recent social media posts from all of the aforementioned fascist and far-right groups all target Muslims and Islamic beliefs, and more Islamophobic attacks have been reported since the terrorist attacks in Paris and Brussels.

The Cordoba Foundation report quoted Professor Matthew Goodwin, an expert in immigration, radicalization and Europe, at the University of Kent: "[Far-right] activists have embraced the Internet to such an extent that for them, [it has] become an indispensable tool of communication."

Atta told AA that the far-right's hate speech had found an elaborate medium with the refugee crisis. She also said statements from more mainstream right-wing populist parties, such as the United Kingdom Independence Party (UKIP), should be scrutinized: "With [the possible] 'Brexit,' the key is to look at the language of the right-wing populists from UKIP and be wary if the refugee and migrant crisis is blurred along religious lines – as seen in other parts of Europe," she said. Echoing Atta, Brittain said a British exit from the EU would be a victory for Islamophobes: "I think it would be very serious … the winners would be racism and Islamophobia, and the encouraging of old-fashioned attitudes in Britain as the center of the universe."

In general, Europe has been witnessing a shift toward right-wing parties, which have been gaining popularity over the fear of a refugee influx. Recently, polls noted a rise in support for right-wing parties in Austria, Poland, France and Switzerland.

EDL, Britain First and PEGIDA U.K. all failed to respond to interview requests for this report.