Erdoğan: Karabakh will be returned to Azerbaijan one day 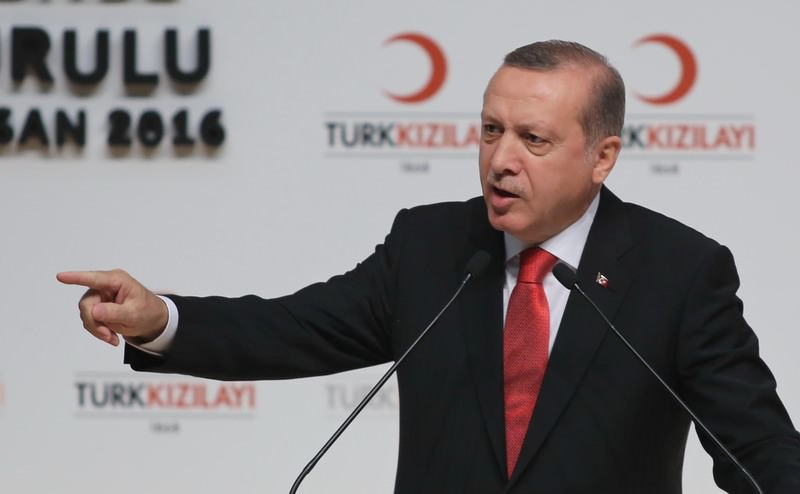 President Recep Tayyip Erdoğan has vowed to support Azerbaijan in its struggle against Armenian militias, which hold the Nagorno-Karabakh region under occupation and continue attacks despite unilateral cease-fire

President Recep Tayyip Erdoğan Monday repeated his assertion that Turkey backs Azerbaijan in its struggle against Armenian militias that continue attacks in the disputed Nagorno-Karabakh region despite the unilateral cease-fire declared by Baku. Speaking at the Turkish Red Crescent Council, Erdoğan said: "The fire of Armenia's massacres in Karabakh continues to burn in our hearts." Touching on the killing of 12 Azerbaijani soldiers by Armenian militias, he said: "Karabakh will surely be returned to its rightful owner, Azerbaijan, one day."

Turkey declared its unconditional support for Baku when the clashes broke out in Nagorno-Karabakh. In addition to Erdoğan, Prime Minister Ahmet Davutoğlu, Foreign Minister Mevlüt Çavuşoğlu and National Defense Minister İsmet Yılmaz harshly condemned the Armenian militias. Azerbaijan said three of its soldiers were killed on Monday in clashes over the breakaway Nagorno-Karabakh region in a third day of renewed violence that risks turning the "frozen conflict" into all-out war. Ex-Soviet states Azerbaijan and Armenia fought a war over Nagorno-Karabakh in the 1990s that ended with a fragile truce. That was broken over the weekend with the most ferocious fighting in years, killing dozens of people on both sides.

Although Azerbaijan declared cease-fire, Armenian militias continued to attack Azeri military units. Armenia threatened Azerbaijan and said if the clashes continue it would formally recognize Nagorno-Karabakh as independent from Azerbaijan, and formalize Armenian military aid to the separatists.

Accounts from Azerbaijan and the ethnically Armenian separatist forces on Monday indicated that fighting was less intense than at its peak on Saturday. But there was no sign that the flare-up in fighting could be quickly contained, despite calls from world powers for an immediate halt to the fighting.

The fighting was around the "contact line," a heavily-mined no-man's land that, since the 1994 ceasefire, has separated the separatists, in the foothills of the Karabakh mountains, from Azeri forces dug into defensive positions in the plains below. Azerbaijan's military and the separatist forces attacked each other with tanks, helicopters, missile systems and artillery. Each said they had captured small chunks of territory from the other side. On Monday, the separatist military said it had destroyed an Azeri army unit, while Azerbaijan said it had struck a separatist command point, causing several casualties. Azerbaijan's defense ministry said it wanted to stop the fighting but that separatist forces were still "aggravating the situation", attacking Azeri positions and shelling nearby settlements, forcing Azeri forces to defend themselves. The separatists, and their backers in the Armenian government, said Azerbaijan was the aggressor. Azerbaijan also warned Armenia against targeting civilians. "If Armenian forces continue targeting settlements and civilians, Armenia will bear the responsibility for the actions of Azerbaijani army, which will ensure the safety of civilians," Foreign Ministry spokesman Hikmet Hajiyev said in a statement. He said Armenia continued to shell Azerbaijani positions "intensively" despite Azerbaijan declaring a cease-fire on Sunday.

France, a co-president of the Minsk Group of negotiators in the Nagorno-Karabakh conflict, said on Monday the group would meet on Tuesday in Vienna to discuss the clashes. In a statement, the French foreign ministry said its incumbent, Jean-Marc Ayrault, had spoken to his Armenian counterpart and called for an immediate ceasefire.

A return to war would destabilize a region that is a crossroads for strategically-important oil and gas pipelines. It could also drag in the big regional powers, Russia and Turkey. Moscow has a defense alliance with Armenia, while Ankara backs Azerbaijan. Russian Foreign Minister Sergei Lavrov said a statement by Ankara expressing strong support for Azerbaijan was "one-sided". "This is a crucial few days," said Thomas de Waal, Senior Associate at the Carnegie Endowment, a think tank. "The whole conflict zone is on the brink of a wholesale war, which could be disastrous for everybody."

The violence was a re-awakening of a long-festering ethnic conflict between mainly Muslim Azeris and the Christian Armenians who have for centuries been their neighbors. Nagorno-Karabakh is a mountainous enclave with a large ethnic Armenian population that lies inside the territory of Azerbaijan. Tensions flared as the Soviet Union started to disintegrate. With help from Armenia, the region's ethnic Armenians took up arms to try to throw off rule from Azerbaijan. By the time of the 1994 ceasefire, they had pushed Azeri forces out of almost all of Nagorno-Karabakh and took control of surrounding districts. Azerbaijan has always vowed to restore its control but at the time, poor and riven by political infighting, it had to accept the truce. Since then though, it has grown wealthy from exporting oil, and spent heavily on rebuilding its military. After the violence at the weekend, France, Russia and the United States, joint mediators in the conflict, called on both sides to stop fighting. Envoys from the three countries are to meet in Vienna on April 5 for talks on the latest fighting. However, observers of the conflict said it may develop a momentum of its own, with neither side willing to back down and risk losing face among their own supporters.

Azerbaijani troops are roughly in control in 20 percent of the territories of the separatist region, which makes up less than half of the occupied territories. Armenian forces are being accused of committing grave human rights violations against local Azerbaijani population in invaded territories, with the Khojaly Massacre being the most notable. More than 700,000 Azerbaijanis and 300,000 Armenians were displaced due to the conflict. Many displaced Azerbaijanis continue to live in poverty as the Azeri government refuses to accept the status-quo. Both sides report numerous casualties, accusing each other on Saturday of violating a ceasefire, a sign that the two-decade-old conflict which has left some 30,000 people dead is far from a peaceful resolution.
Last Update: Apr 05, 2016 5:38 pm
RELATED TOPICS