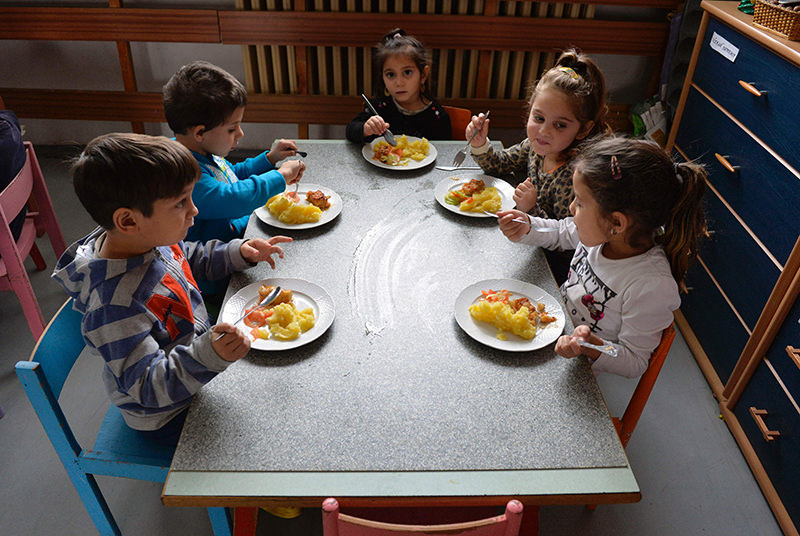 This file photo taken on December 11, 2015 shows children eating lunch in their kindergarten at Hrebendova street in the Lunik IX borough of Kosice. (AFP Photo)
by Apr 07, 2016 12:00 am

His mouth open wide, four-year-old Milos is intent on managing a plate of fish and potatoes using adult-sized cutlery -- a meal all too rare for the many Roma children living in squalor in Slovakia.

"Childhood obesity isn't a problem here," kindergarten director Anna Klepacova told AFP, as she watched her pupils eat what is often their only meal of the day.

Little Milos is one of over a hundred Roma children attending a pre-school at the impoverished Lunik IX housing estate, an urban wasteland in Slovakia's second city of Kosice that looks more like a slum in the developing world than a neighbourhood in the eurozone.

And there appears little hope for change following the general election in March.

Surrounded by heaps of trash, Lunik's massive, grim communist-era high-rise concrete apartment blocks have had no electricity, heat, gas or running water since utilities were cut more than a decade ago due to unpaid bills.

Over-crowding is chronic, with 6,000 residents squeezed into quarters meant to accommodate half that number.

Chimneys puffing thick, grey smoke, stick out some of windows; stoves installed in many of the flats are loaded with wood harvested from a nearby forest. Water is gathered in jerry cans from a ground floor outdoor faucet that only runs in the morning.

Nearly 20 percent of Slovakia's estimated 400,000 Roma live in abject poverty, in more than 600 shanty towns and slums mostly in the south and east of this economically successful eurozone country of 5.4 million people.

A 2012 UN Development Programme report found that around 75 percent of the country's Roma are unemployed, a rate seven-times higher than among non-Roma.

Slovakia vowed in 2012 to eliminate discrimination in education and housing, but the results of last month's general election suggest that life for Roma people is unlikely to improve anytime soon.

The community lost Peter Pollak, its first and only member of parliament, after he failed to hold on to his seat in the March 5 ballot.

Dominated by the racially charged anti-Muslim and anti-refugee policies of leading left and right-wing parties amid Europe's migrant crisis, the election also ushered a stridently anti-Roma ultra-nationalist party into parliament for the first time.

The Our Slovakia party made a strong debut, winning 14 seats in the 150-member Slovak parliament. Party chief Marian Kotleba is known for leading street marches with members of the far right party dressed in neo-Nazi black uniforms.

He has repeatedly been detained and charged with hate speech, chiefly against Roma.

Analysts and opposition politicians mince no words in calling him and his party "fascist".

Kotleba "represents a real threat to Roma," said activist Jarmila Lajcakova, a sociologist with the Bratislava-based Centre for the Research of Ethnicity.

"With the extreme right in parliament," she said, there is now "the very worrying trend of other parties trying to 'compete' with Kotleba when it comes to suppressing the rights of minorities, especially the Roma.

"The threat of physical assault and intimidation against Roma has also increased," she said.

Pollak, a conservative who also served as Slovakia's commissioner for Roma affairs since 2012, petitioned the prosecutor general to ban Our Slovakia. Nearly 200 similar requests have been filed.

He went on to quit as commissioner on Monday this week, insisting that his efforts to overcome discrimination were largely "ignored" by the "previous government and nothing changed after the elections".

A member of Slovakia's 460,000-strong Hungarian minority, Ravasz vowed to apply lessons learnt about improving this group's standing to the Roma cause.

He however also said he wants to "put much greater emphasis on the concerns of the majority population, while at the same time enhancing the anti-discrimination agenda."

A populist social democrat who campaigned hard on a strident anti-Muslim and anti-refugee platform, Fico also has a long record of anti-Roma rhetoric as does one of his coalition partners, the right-wing Slovak National Party.

Fico routinely scapegoats the Roma for driving up unemployment statistics and in 2012 was quoted as insisting "the Roma problem... cannot be effectively solved without enforcing some limitations on human rights."

Alena Kluknavska, an expert on extremism from the Bratislava-based Comenius University, insists that this type of rhetoric against minorities has become the norm in Slovakia and elsewhere in the region.

"Public attitudes towards ethnically or culturally defined 'others' have been relatively hostile in the region of central and eastern Europe and nationalism is not confined to the extreme right, but is also part of mainstream politics," she told AFP.

Having migrated from the Indian subcontinent around a 1,000 years ago, the Roma now constitute Europe's largest minority group, numbering around 10-11 million people.

Some six million live in the 27-member European Union and are among its poorest citizens.