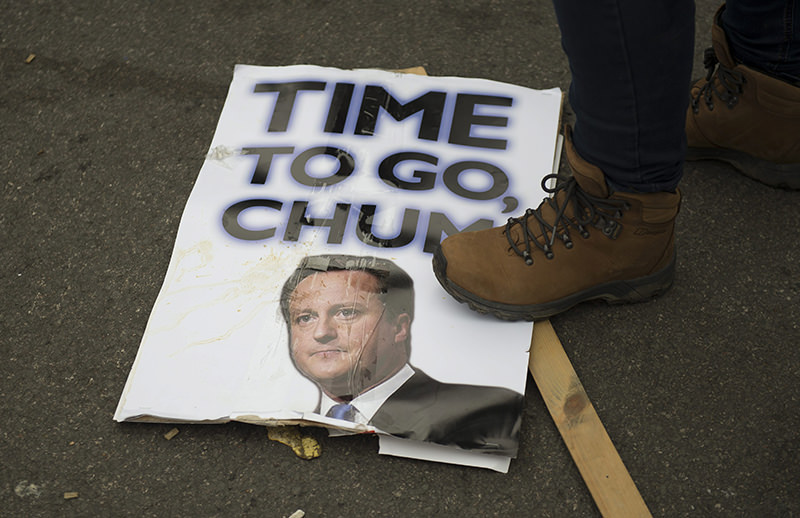 A protester steps on a placard with the picture of British Prime Minister David Cameron during a demonstration calling for Cameron's resignation in Central London. (EPA Photo)
by Anadolu Agency Apr 09, 2016 12:00 am

Thousands of protestors called for the resignation of British Prime Minister David Cameron on Saturday following the admission that he owned shares in an offshore tax haven.

After four days of questioning over his link to Blairmore Investment Trust, a Bahamas-based fund set up by his late father, Cameron admitted on Thursday to making more than 30,000 pounds ($42,400) from the sale of shares in the company.

Demonstrators carrying placards reading "Cameron must go" and "Get the Tories out" met at Downing Street before marching to a meeting of Cameron's Conservative Party in central London.

Addressing the meeting, the prime minister admitted making mistakes in handling questions over his finances.

Cameron said he would be release information about his tax return for the year he sold the shares.

"I'll be publishing the information that goes into my tax return, not just for this year but for years gone past because I want to be completely transparent and open about these things," he said. "I'll be the first prime minister, the first leader of a major political party, to do that, but I think it's the right thing to do."

The revelations about the tax haven came in a leak of 11 million documents held by Panamanian law firm Mossack Fonseca. Known as the Panama Papers, the files revealed that Cameron's father Ian had been a client of the firm when he set up the investment fund in 1982.

The offshore company did not paid U.K. tax for more than 30 years.

His involvement has led to allegations of hypocrisy against Cameron, who has called for tax loopholes to be shut for the "super-rich elite", and questions about his commitment to tackling tax avoidance.

Opposition Labour Party leader Jeremy Corbyn has called for Cameron to explain himself in parliament on Monday while some Labour lawmakers have demanded he step down.