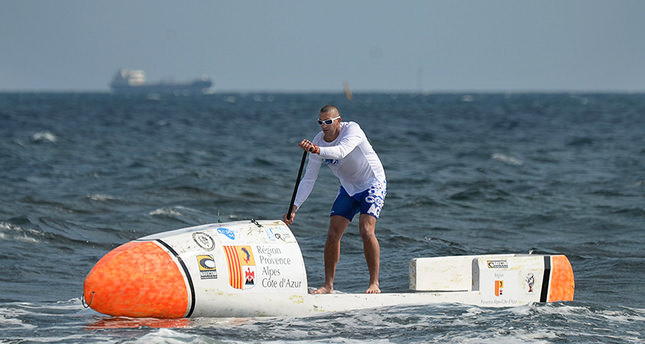 Frenchman Nicolas Jarossay set off Sunday on a 5,000-kilometre (3,000 mile) odyssey to become the first person to cross the Atlantic solo -- on a stand-up paddle.

Jarossay, a 38-year-old firefighter and endurance sports fanatic, left Praia on the Cap Verde coast on the first stage of an ambitious trip which is scheduled to see him paddle in to the French Caribbean island of Martinique in just over two months time.

He left port mid-afternoon, organisers said, on a modified paddle that was seven metres long and 83 centimetres wide, almost double the length of the classic paddle much beloved of sporty beachgoers with a sense of balance from Bali to Brazil.

The Frenchman's "livable" version allows him to squeeze into a basic sleeping compartment 2.2 metres long and 45 centimetres high.

The "cabin" area will also allow a little storage space for freeze-dried provisions.

Solar panels fitted to the mini craft will allow Jarossay to charge up equipment as required.

Before setting off he told paddlers web platform TOTALSUP he had been plotting his journey for three years and decided against deploying a guide vessel after a nightmare.

"I am out there in the ocean paddling with my food on board the SUP for the day and a heated argument breaks out with the people on the boat who take off and leave me in the middle of the Atlantic," said Jarossay, who added his adventure would cost around $50,000 which he hoped to recoup from sponsors and donations.

Thereafter, "it became clear to me that I should do the whole crossing without assistance and in total autonomy!"

Jarossay's attempt comes five years after US paddler Alex Linnell set a world record on his board by negotiating the entire length of the Mississippi River, some 3,780 kilometres.

Share on Facebook Share on Twitter
Previous in Europe The Brussels-based DAESH extremists behind the Paris attacks had planned... Next in Europe Three men attacked a rural police station in southern Russia on Monday...
DAILY SABAH RECOMMENDS