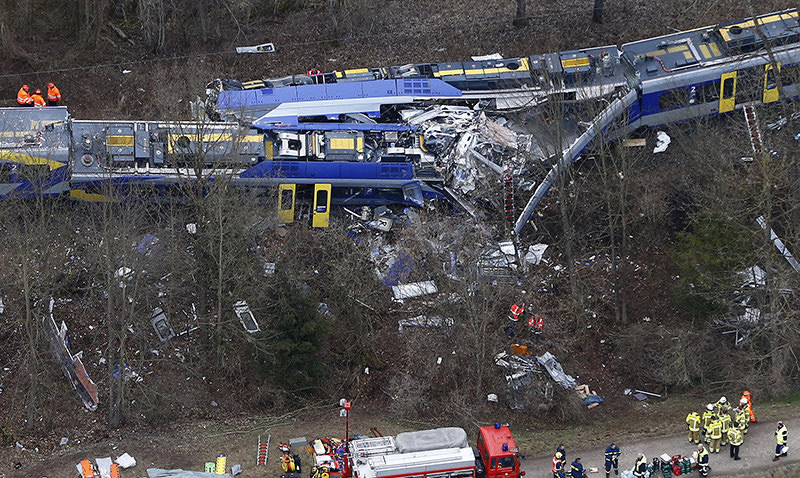 This Tuesday, Feb. 9, 2016 file photo shows an aerial view of rescue teams at the site where two trains collided head-on near Bad Aibling, Germany (AP Photo)
by Apr 12, 2016 12:00 am
A signal controller at the centre of an investigation into a German train crash that killed 11 people admitted on Tuesday to playing a game on his mobile phone while in charge on the day, the public prosecutor's office said.

The man was detained on Tuesday after developments in the investigation into the head-on train collision in Bavaria in February, which was Germany's biggest train crash since 1998. He faces possible charges of causing death through negligence.

The public prosecutor's office in Traunstein, near the border with Austria, said investigations had found the man "turned on his mobile phone during his shift on the morning of the accident, started an online computer game and played actively ... until just before the collision of the trains."

The man denied being distracted by the computer game. But the prosecutor's office said the time period in which he was found to be playing the game meant it could be expected that he was not paying attention to a critical traffic intersection.

The controller gave the trains an incorrect signal and then hit the wrong buttons when issuing a distress signal, meaning it was not heard by the train conductors, the prosecutor's office said.

The trains, carrying about 150 people in all, crashed at high speed on a 6-km (4-mile) stretch of track between the spa town of Bad Aibling and Kolbermoor, near the Austrian border.

The investigation is continuing. No evidence of technical problems has been found to date.