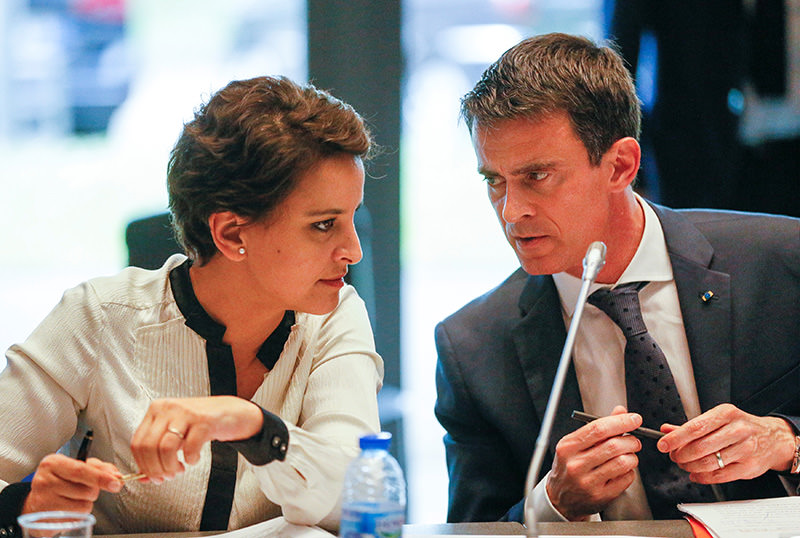 Over the course of a few hours on Wednesday, comments of French Prime Minister Manuel Valls advocating a legal ban on headscarves at university and calling Islam incompatible with the values of the republic triggered a wave of criticism on social media and within his own government and Socialist Party.

Valls made the comments in an interview with French daily Liberation, just weeks after Laurence Rossignol, the French minister of families, children, and women's rights, sparked controversy by comparing women who choose to wear headscarves to the "American Negroes who were for slavery."

Asked in the interview whether headscarves should be banned by law from universities, Valls replied: "It should be done but there are constitutional rules that make this prohibition difficult."

"We must be uncompromising on implementing of rules of secularism in higher education," he added.

Last December, the Observatory of Secularism, an expert commission connected to the Prime Ministry, stated that it was "neither useful nor appropriate" to make legislation on students wearing religious symbols, including headscarves.

A 2004 law bans the wearing of religious signs, including headscarves, in public schools, and a more recent law (2011) bans the face veils in all public spaces.

In response to Valls' comments, Education Minister Najat Vallaud-Belkacem said she did not support banning headscarves from universities, adding that students are young adults with "freedom of conscience and religious liberty" to do as they please.

"Our universities also have a lot of foreign students. Are we going to ban them access because in their culture there's a certain type of clothing?" she told reporters on Wednesday.

Secretary of State for Higher Education Thierry Mandon said "there is no need" for such a law.

"What I see on the ground, what I hear from all the university presidents, is that there is no problem [with headscarves] and that it is not useful to create a problem that does not exist," Mandon told French radio RTL.

He added that students who choose to wear headscarves "are adults, who have the right to keep wearing headscarves, the scarf is not prohibited in French society".

The Conference of University Presidents or CPU also expressed its continued strong opposition to any ban.

"The academic community is for freedoms-religious, political, workers-and is opposed to the ban on headscarves at university," the CPU said on its official Twitter account.

The hashtag #VraisProblemesUniversite (#RealUniversityProblems) is trending on Twitter, with students tagging the French PM and pointing to what they call "the real problems of higher education".

"Waiting anxiously for the grant because you only have 10 euros left to finish the month, that's a problem," said one Twitter user.

Valls was also criticized for telling Liberation: "I would like us to be able to demonstrate that Islam, a great world religion and the number two religion in France, is fundamentally incompatible with the republic, democracy, our values, and equality between men and women."

"I think Mr. Manuel Valls has been trying to become the Donald Trump of France," Yasser Louati, spokesperson for the Collective Against Islamophobia in France, told Anadolu Agency.

"If Mr. Valls wants to prove the compatibility of Islam with the republic, I invite him to read history books about the tens of thousands of Muslims who died defending this country against Nazi Germany," he added.

Louati accused Valls of trying to distract the public from the "disastrous social and economic results" and failure of his government's policies.

"He has nothing to offer to France aside from further dividing it," Louati explained. "We are a country that has recently been a target of terrorist attacks, we have record high rates of unemployment, we have institutional crises, and the only thing Mr. Valls is talking about is further excluding a significance portion of the French population".

He added: "This shows lack of competence and lack of good will to act as a prime minister. He is not only a disgrace to his position as a PM but he is also dangerous because he is fulfilling what terrorists abroad want: targeting Muslims and classifying them as the enemy within."

Louati warned that Valls is leading the country to a civil war by "turning his own people against each other".

Valls's comments come a few weeks after his government launched the #TousUnisContreLaHaine (Everyone United Against Hate) campaign to underscore the dangers of prejudices and racism.

The campaign is based on six videos of real hate crimes that have occurred in France. The 30-second videos end with the text: "Racism, anti-Semitism, anti-Muslim acts-They begin with words, and end with spitting, blows, and blood".