In London, Obama to wade into Brexit debate 'as a friend' 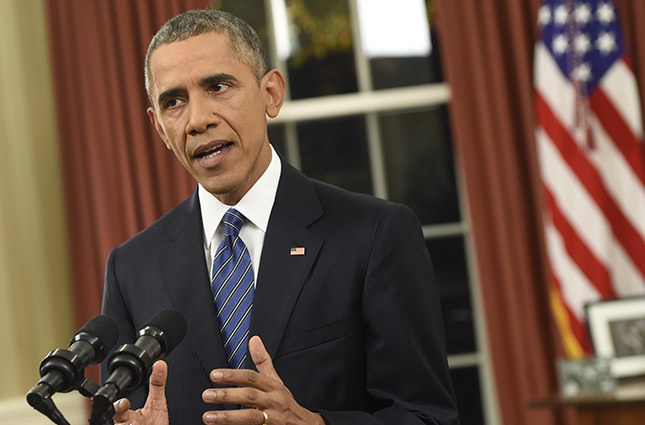 by Apr 15, 2016 12:00 am
U.S. President Barack Obama will put himself in an unusual, and risky, position next week in London: smack-dab in the middle of the heated British debate over whether to remain part of the European Union.

The White House believes the United Kingdom is better off economically and politically if it stays part of the European Union - a candid argument Obama will likely make during a news conference and a town hall with young Britons.

The White House normally goes out of its way to avoid the appearance of meddling in other nations' elections when scheduling visits abroad and in Washington.

But just two months ahead of the June 23 referendum on Britain's possible exit, dubbed "Brexit," and with Britons evenly split, Obama will appear next to his friend and ally, Prime Minister David Cameron, who is leading the "In" campaign.

"We have no closer friend in the world, and if we are asked our view as a friend, we will offer it," Ben Rhodes, Obama's deputy national security adviser, referring to Britain, told reporters on Thursday.

"But he'll make very clear that this is a matter that the British people themselves will decide when they head to the polls in June," Rhodes said.

The visit's timing is a sign of how much Obama feels is at stake. The International Monetary Fund warned this week that a Brexit could deal a blow to the fragile global economy.

The White House is also concerned about the impact a UK departure would have on the EU as it grapples with migration and counterterrorism issues, said Charlie Kupchan, Obama's senior director for European affairs.

"We would not want to see a Brexit that could potentially damage the European Union and increase the challenges that it faces," Kupchan said.

A YouGov poll for The Times newspaper on Thursday showed 39 percent of voters on the "Out" side, 39 percent backing "In," and 17 percent undecided.

But polling data also reveals "Out" supporters are more "fired up" and motivated to turn out to vote, said Chris Jackson, a vice president at Ipsos Public Affairs.

Obama, who is popular in Britain, could potentially craft a powerful emotional argument to reframe the debate and motivate potential "In" voters, Jackson said.

Polls show young voters in particular are more pro-European, but less inclined to vote. Obama will speak directly to young Britons on Saturday morning in an informal yet high-profile question-and-answer style event.

"If he can help energize that part of the electorate, I think it would be really powerful," said Karen Donfried, a former adviser to Obama on European issues.

He also may counter U.S.-related arguments being used by the "Out" campaign that the UK does not need the EU because of its "special relationship" with the United States, said Donfried, now president of the German Marshall Fund of the United States.

Obama will have to choose his words carefully, said Richard Morningstar, a longtime U.S. diplomat and former ambassador to the EU.

"If he comes out too strong with a public message, there will be a lot of accusations by the Brexit supporters, that 'What business is it of the United States to be injecting itself in the debate?'" Morningstar said.

London Mayor Boris Johnson, who is campaigning for the "Out" side, has already railed against the "outrageous and exorbitant hypocrisy" of Obama's impending visit.

That shows the risk in Obama's visit, said Desmond Lachman, a former managing director at Salomon Smith Barney and a former IMF official.

"Oftentimes, the British aren't too keen about having foreigners telling them what to do," said Lachman, now with the American Enterprise Institute, a conservative think tank.

"It's not clear to me that this is really going to be that constructive, his going there and weighing in on this debate," Lachman said.