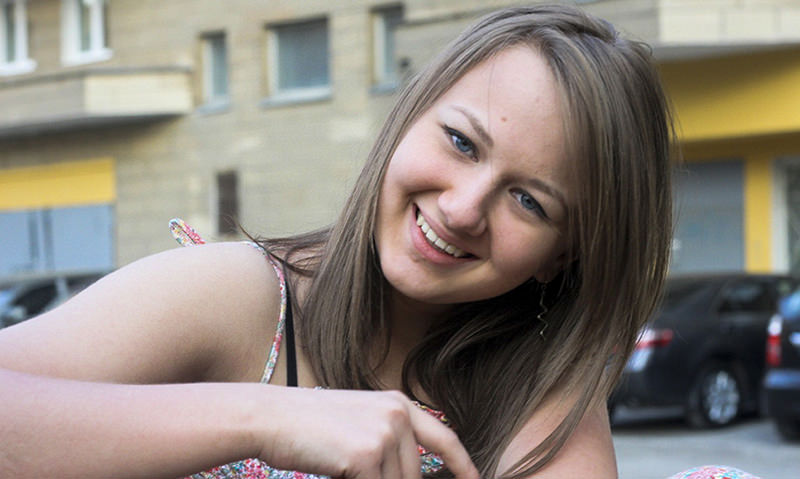 In this handout photo taken and released by Elena Sablina, mother of Alina Sablina in 2013 year, shows her daughter somewhere in Moscow, Russia (AP Photo)
by Associated Press Apr 15, 2016 12:00 am
When Elena Sablina's daughter Alina was killed in a car crash in Moscow two years ago, she was devastated.

One month later, Sablina accidentally discovered from a forensic report that six of her 19-year-old daughter's organs, including her heart and kidneys, had been removed for transplant.

"I was shocked that organs were taken from my child without my permission," Sablina told The Associated Press.

Yet all of that was legal. Russian law explicitly allows doctors to take organs from deceased patients without informing their families. Sablina sued for damages in five Russian courts and has lost every challenge. In frustration, she recently filed a case with the European Court of Human Rights in Strasbourg, contending that the removal of her daughter's organs violated several articles of Europe's Human Rights Convention. Sablina also hopes her daughter's case will prompt a change in Russian law.

"(Doctors) just came with a briefcase and took what they wanted," said Sablina, who said she would not have agreed to the donation even if asked. "Who gave them the right?"

More than a dozen countries in Europe, including Russia, have a "presumed consent" donation system, where, in an attempt to boost the number of available organs, the government assumes people will be donors unless they specifically opt out. Others, like England, require people or their relatives to provide permission before anything can be taken.

In some countries with presumed consent, including Spain and Belgium, doctors still consult family members before removing organs. But in Russia, doctors don't always seek the family's permission beforehand.

A recently proposed amendment, however, would require Russian doctors to inform a patient's relatives within 12 hours of their loved one's death of any intention to remove organs or tissue, giving the family time to object. But the amendment does not make it mandatory for doctors to obtain the family's consent before taking organs. The proposal is still awaiting approval and there is no timeline on when Russian lawmakers might debate it.

Still, that would only be a partial solution, critics say, since Russia still lacks an organ donation infrastructure, including a viable way for people to opt out.

After her daughter's accident in Moscow, Sablina and her husband flew from their home in the Ural Mountains city of Yekaterinburg to be with her at the hospital. The doctors told them to prepare for the worst. After five days, Sablina said the doctors said they were too busy to talk, that she and her husband could not see Alina that day and asked them to leave.

The following morning, Sablina got a telephone call from a funeral home informing her that her daughter had died. She inadvertently discovered the organ removal as she reviewed a criminal case file against the driver implicated in the fatal collision.

One doctor had removed her daughter's heart while another took her kidneys. Doctors also cut out part of her aorta, her adrenal gland and a piece of her right lung. Sablina sued the hospital and two other institutions involved. Her lawyer, Anton Burkov, said Russian law gives doctors a disturbing amount of discretion.

"Every single act of organ removal is conducted without any permission from the relatives," he said. "Doctors can freely ignore the families since it is completely legal to harvest organs in secrecy."

Burkov said they have requested priority status with the European Court but that a judgment could still take two to four years. A similar case filed by a Latvian mother resulted in a ruling against the country and a modified law.

The Russian ministry of health did not respond to repeated requests for comment on the case.

Alexei Starchenko, chairman of Russia's National Patient Safety Agency, said every hospital that performs organ transplants has its own waiting list, describing the system as "corrupt" since there is little transparency to explain how organs get distributed, unlike the clear criteria used by most other Western countries.

Russian lawmakers say the taking of organs without permission is partly out of consideration for grieving families. In a 2003 ruling upholding the law, the Constitutional Court said it is "inhumane to put the question of harvesting organs or tissues to a person's relatives at practically the same time as they are notified of his death."

"My sympathies lie more with the governments that are trying to save lives through transplantation of healthy organs that are absolutely of no use to the deceased or their families," said Robert Wintemute, a professor of human rights law at King's College London. "If we stop and ask whose organs these are, they don't really in any sense belong to the family."

Others said stronger safeguards were needed in Russia.

"To behave as the doctors in Russia behaved, is totally unacceptable," said Dr. Roberto Cacciola, a transplant surgeon at The Royal London Hospital in Britain.

In England, he said, multiple doctors and nurses must ensure consent has been obtained from the family before removing any organs.

For Sablina, the lawsuit in the European Court is an attempt to honor her daughter's memory.

"If I don't start to fight against such an inhumane, cruel law, if I just stop and forget about it, I will betray my girl," Sablina said. "This law should be changed. The law should be humane."
Last Update: Apr 15, 2016 2:33 pm
RELATED TOPICS