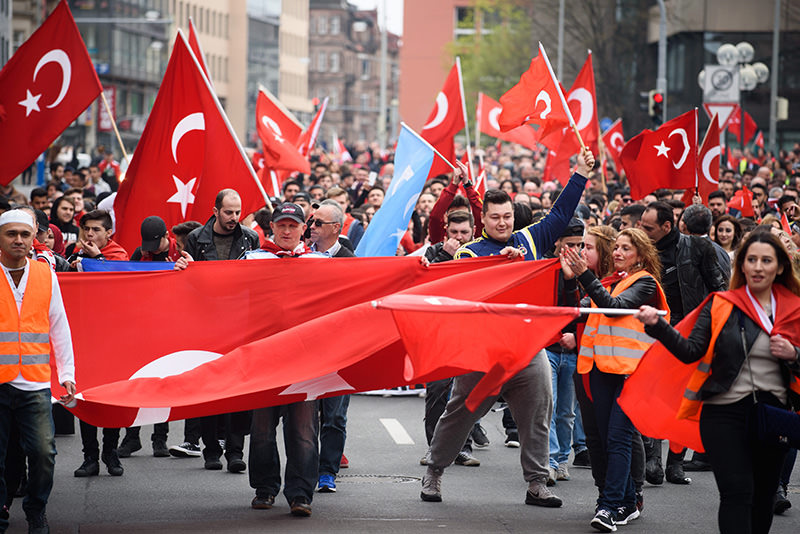 The right-wing British newspaper Daily Express described the recent initiative to make Turkish an official language of the European Union as "horror," saying the move was part of a plan for Turkey to join the union despite objections.

The newspaper which has apparent ties with the right-wing Euroskeptic U.K. Independence Party (UKIP), associated the initiative solely to the highly debated issue of Turkey's membership to the EU, ignoring the presence of approximately 10 million Turks living in EU jurisdiction. This number is almost equal to the population of Hungary, and higher than the populations of 16 countries of the 28-nation bloc.

The article came after Greek Cyprus President Nicos Anastasiades' proposal to the European Parliament to add Turkish to official EU languages. The European Parliament on April 14 voted 375 – 133 in favor of the proposal, but, the article, by establishing a forced connection between the initiative and Turkey's membership to the EU, attacked the initiative and described it as "horror". It said that some 508 million EU citizens have not yet cast their votes deciding on Turkey's membership.

The newspaper's claim deliberately ignored two facts, which are that this process has not been applied to any member of the EU; while the members of the EU Parliament that voted for the initiative have been elected to office through direct elections since 1979, including the ones from the UKIP that Daily Express gives financial support to.

The international community recognizes Greek Cyprus as the continuation of the bi-communal Republic of Cyprus founded in 1960 with claims of sovereignty over the entire island. The population of Turkish Republic of Northern Cyprus (TRNC) is at 313,000 according to a census in 2014, with additional 150,000 Turkish nationals living in the north for business of education purposes. Turkish Cypriots are considered EU citizens and currently benefit from the same rights as EU citizens, even though they live on a territory not under the control of the Greek Cypriot administration.

Recent talks between Anastasiades and Turkish Cypriot President Mustafa Akıncı since April 2015 to produce a federal state with two autonomous entities have been positive and many of those involved have said they expect an agreement on reunifying the island to be made by the end of 2016.

The Greek Cyprus has been an EU member since 2004, despite assurances from the EU that it would not be the case until a permanent solution was achieved over the island, which was divided after Turkey used its guarantor right for a military intervention in 1974 following a decade of inter-communal violence and a Greece-backed coup.

The article also mentioned that the financial burden of the initiative is expected at £25 million (31 million euros) and this was a "proof" of Turkey's accession. The EU's 2016 budget is set at 155 billion euros in commitments and 144 billion euros in payments.

It is no surprise that the article came just before the U.K.'s referendum on June 23 deciding on whether to stay within the EU or not. Without touching upon the practical changes that the initiative would bring to Turks living in Europe, the article went on to describe how Turkey's membership to the EU would affect the U.K. and the country's role within the union. Meanwhile, Turkey is also the fifth largest trade partner of the EU, with a clear trade balance advantage for the 28-nation bloc.

The Euroskeptic parties, often associated with xenophobia and Islamophobia by critics, have traditionally fared better in European Parliament elections than national elections.

In addition to millions of Turks and their descendants who migrated to western Europe in 1950s and 60s to help rebuild the war-torn continent, hundreds of thousands Turks live in current EU members Greece, Bulgaria and Romania, along with thousands of others residing in Albania, Bosnia and Herzegovina, Kosovo, Macedonia and Serbia, which are widely regarded as prospective members of the EU.