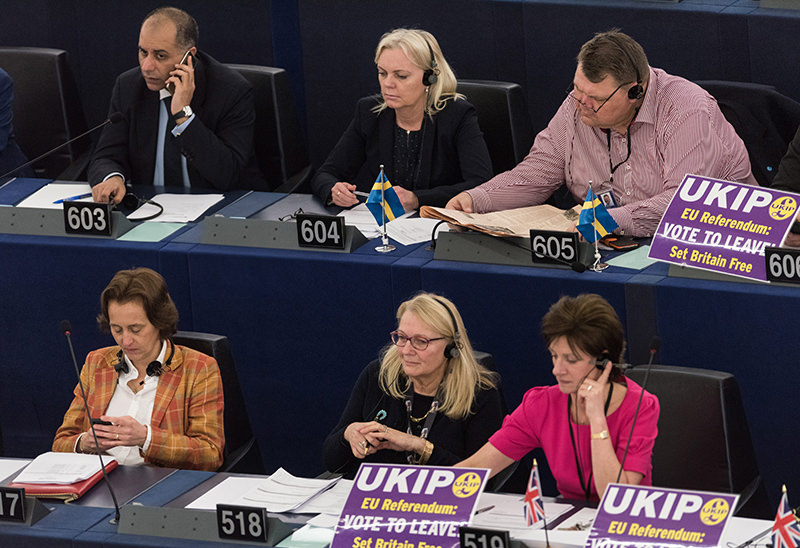 Beatrix von Storch (L), MEP of the German right-wing populist 'Alternative for Germany' party before the plenary session in the European Parliament in Strasbourg, France, 12 April 2016 (EPA Photo)
by Apr 18, 2016 12:00 am
A leader of German Muslims on Monday likened the attitude of the anti-immigration Alternative for Germany (AfD) party towards his community to that of Hitler's Nazis towards Jews.

"It is the first time since Hitler's Germany that a whole religious community is discredited and existentially threatened," Aiman Mazyek, head of Germany's Central Council of Muslims, told German television.

He was responding to AfD plans, announced at the weekend, to press for bans on minarets and burqas at its congress in two weeks' time.

"The AfD is riding a wave of Islamophobia," Mazyek said. "This is not an anti-Islam path, it is an anti-democratic path."

Merkel's conservatives have also called for an effective ban on the burqa, saying the full body covering of some Muslim women should not be worn in public. But they have not said Islam is incompatible with the constitution.

AfD leaders say the influx of more than one million migrants last year, mainly Muslims fleeing conflicts in Syria, Iraq and Afghanistan, makes the "Islamization of Germany" a real threat.

The rise of the AfD has alarmed mainstream parties, who rely on compromise to form coalitions.

Vice Chancellor Sigmar Gabriel, a Social Democrat, accused the AfD of using language similar to that of Hitler's Nazis.