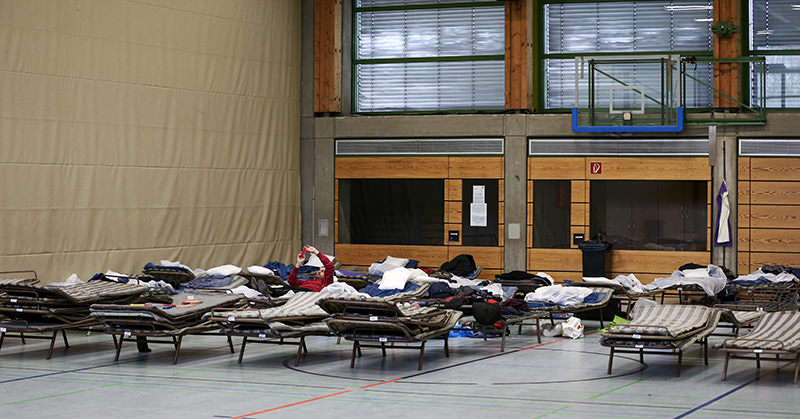 Picture taken on February 19, 2015 shows refugees laying on field beds at the Frankenhalle gym in Neustadt bei Coburg, southern Germany, that was turned into a makeshift shelter for refugees (AFP Photo)
by Daily Sabah with Wires Apr 19, 2016 12:00 am

German police arrested five people on suspicion of establishing a far-right terror group. Anti-migrant sentiment has been on the rise in the country as several political figures have been accused of hate speech against refugees and Muslims

The suspects, four men and a woman, are accused of belonging to a far-right terrorist organization called the Freital Group, named after an eastern town that has seen a rash of racist protests that have shocked the country. "According to preliminary investigations, the aim of the group was to carry out explosive attacks on homes for asylum seekers and political enemies," the federal prosecutor's office said in a statement. It said the suspects stockpiled hundreds of fireworks from the Czech Republic to use in attacks.

The assaults included using fireworks to blow out the windows of the kitchen of a refugee shelter in Freital in September 2015. "The residents of the home only escaped injury from the flying glass because no one was in the kitchen at the time," the prosecutor's office said. A second attack the following month blamed on the group involved suspects hurling fireworks and stones at a building housing leftist activists. No one was injured. Prosecutors said that the cell also attacked another refugee shelter in Freital in November last year, where a resident suffered cuts to his face from flying glass.

They said the investigation would seek to determine if the organization was responsible for further violence. Small towns such as Freital in the eastern state of Saxony earned nationwide notoriety last year as groups of neo-Nazis and angry residents hurled abuse at people fleeing war and misery - and rocks at police sent to protect those seeking a safe haven. Recently, Germany has witnessed a surge in far-right attacks. Federal police in 2015 recorded more than 800 attacks on refugee shelters in the country, which let in nearly 1.1 million asylum seekers last year. Most of the attacks were concentrated in the former communist east of the country.

The far-right has benefited greatly from public discourse with a slant against Muslims amongst many Europeans. In recent days, support for the far-right Alternative for Germany (AfD) party as well as the xenophobic and anti-Islamic PEGIDA movement has surged. On Monday, AfD was accused of promoting "racist propaganda" over its calls for a ban on Muslim headscarves and mosque minarets. One of the party's deputy leaders, Beatrix von Storch, told local media Sunday that Islam was a "political ideology that is not compatible with the constitution." In comments to the weekly Frankfurter Allgemeine Sonntagszeitung, she added: "Muslims belong to Germany, but Islam does not belong to Germany. We are for a ban on minarets, on muezzins and on full-body veils."

Her remarks were condemned by Christine Buchholz, a lawmaker for the opposition Left Party. "The problem in Germany is not about minarets, headscarves or muezzins, but rather it is about racism against a religious minority," Buchholz said in a statement. "The AfD distracts attention from the unjust distribution of wealth and channels social discontent toward racist propaganda."

In proposals to be adopted at its April 30 party congress, the AfD calls for a "general ban of full concealment by the burka and niqab in public and in the civil service" as well as a bar on headscarves in schools "…because the headscarf is a symbol of the religious-political character of Islam relating to the subordination of Muslim women under men."

Chancellor Angela Merkel's spokesman would not comment on the AfD's program at a news conference Monday but underlined the government's commitment to religious freedom. "Chancellor Merkel has clearly stated on several occasions that Islam has unquestionably become part of Germany in the recent past," Steffen Seibert said.

Merkel's Christian Democrats (CDU) have previously criticized the AfD for stoking fears about Islam. "The AfD is becoming more and more radicalized. Their position about Islam demonstrates extremist views that are not compatible with our constitution," senior CDU lawmaker Franz Josef Jung told Die Welt newspaper.

The AfD achieved record support in regional elections last month with an anti-immigration and anti-Islam platform amid growing concern in Germany over the influx of more than a million refugees last year, most of them Muslims.

Germany, which will hold a general election next year, has the second-largest Muslim population in western Europe. Among the 4 million Muslims in the country, 3 million are of Turkish origin.

Anti-immigration ideology and xenophobia have become more visible in the country as a result of the efforts of political parties such as the National Democratic Party of Germany (NPD) and AfD as well as anti-Islam and anti-immigrant initiatives like PEGIDA, which have staged anti-immigrant rallies and have drawn thousands of people throughout Europe, especially in Germany.

In fact, anti-migrant and Islamophobic sentiment has been on the rise not only in Germany but across Europe. There has been a shift towards right-wing parties, which have been gaining popularity amid rising public fears regarding the refugee influx. Recently, polls indicate a rise in support for right-wing parties in France, Austria, Poland and Switzerland. Since the Paris attacks, the public has generally become more aggressive towards Muslims. In France the number of attacks on mosques and Muslims has risen enormously while the security apparatus has profited immensely by being highly subsidized.