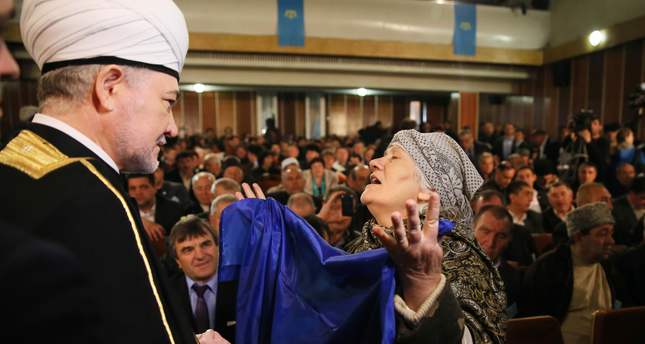 Mufti sheikh Ravil Gaynutdin (L) speaks with a Crimean Tatar woman during the extraordinary session of the Kurultai (national Congress) of the Tatar people, Crimea, Ukraine, 29 March 2014. (EPA Photo)
by Daily Sabah with Wires Apr 19, 2016 12:00 am

In the wake of the Russian ban on the governing body of the Crimean Tatar community, the Mejlis, the Eurasian country's Justice Ministry suspended the highest ruling body of Crimean Tatars on Monday for what it called "extremist activities."

In a statement the ministry said that the Mejlis, the self-governing Crimean Tatar body legalized by the Ukrainian government in 1999, was put on the list of "civic and religious organizations suspended due to alleged extremism".

The statement said that the Mejlis is now prohibited "from using all state and municipal media, holding various public mass events, using bank accounts or conduct any type of work."

"All its propaganda will be prohibited," the statement added.

The ministry said the decision was based on the April 13 order of Crimea's Moscow-backed prosecutor, Natalya Poklonskaya, who called for the suspension of the council.

Previously, Russian authorities in Crimea had banned the governing body of the Crimean Tatar community, the Mejlis, on April 15 in a move slammed by international rights group.

On Feb. 15 Poklonskaya had filed a lawsuit at the Crimean High Court to recognize the Tatar Mejlis as an 'extremist organization' and demanded its closure. The first hearing was held on March 3, and since then the case examination was postponed four times on various grounds.

The Mejlis, a respected decision-making body of the Crimean Tatar minority on the Black Sea peninsula that Moscow annexed in March 2014, has resisted Russian rule and operated under pressure, with many key figures banished from the region.

Many countries including Turkey and the U.S have accused Russia of stifling dissent and harassing Crimean Tatars and pro-Ukraine activists in the Black Sea region of Crimea.

In its annual human rights report released on Wednesday, the U.S. State Department said that Russian authorities have deprived Ukrainians and Crimean Tatars on the peninsula "of the ability to speak out in support of their nationality and ethnicity" and subjected them to "systematic harassment and discrimination."

The study, which covered the year 2015, said that Crimean Tatars opposing Russian occupation have been abused, arbitrarily arrested and denied the right to fair legal proceeding and self-expression. Authorities in Crimea have also suppressed free speech by clamping down on Tatar media outlets and independent non-government organizations, the report said.

Meanwhile, those who refused to adopt Russian citizenship have faced discrimination in getting access to education, health, and employment, according to the report.

Russia annexed Crimea in 2014 after a hastily organized referendum that was not recognized by the United States and the European Union.

Tatars make up around 12 percent of Crimea's total population of 2.5 million.