500 might be dead in Mediterranean shipwreck, UN refugee agency says 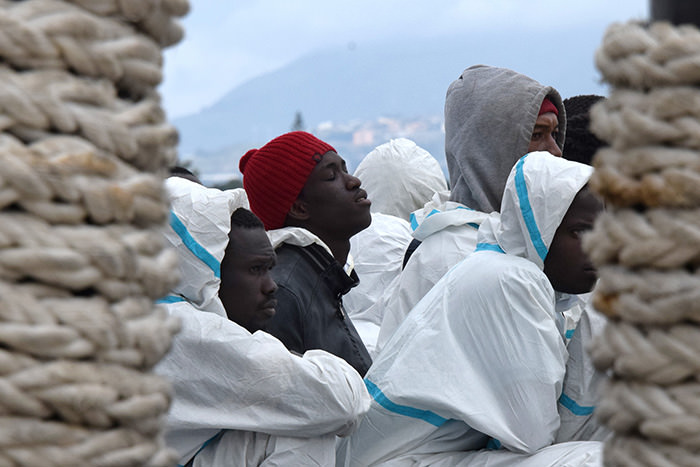 This file photo taken on February 1, 2016 shows men waiting to disembark from the Italian Coast Guard vessel ,Dattilo, in the port of Messina, Sicily, following a rescue operation of migrants and refugees at sea (AFP Photo)
by Apr 20, 2016 12:00 am

The United Nations refugee agency said on Wednesday it feared around 500 refugees from Africa had drowned in the Mediterranean after witnesses said their overcrowded boat sank.

United Nations High Commissioner for Refugees (UNHCR) spokeswoman Carlotta Sami said in a statement sent to AFP that survivors from Somalia, Sudan, Ethiopia and Egypt who were rescued from a small boat had described seeing "a large shipwreck that took place in the Mediterranean Sea claiming the lives of approximately 500 people".

The survivors -- 37 men, three women and a three-year-old child -- said between 100 and 200 people had set off from near Tobruk in Libya in a large, unseaworthy vessel.

"In the middle of sea, the smugglers brought in more passengers, transferring them with a smaller boat. Due to the overcrowding, the large boat sank," the statement said.

The survivors drifted at sea before being spotted and rescued on April 16 and arrived the following day in Kalamata, in Greece, the UN agency added.

It said the date of the sinking was still unclear, and gave no information about who rescued the migrants.