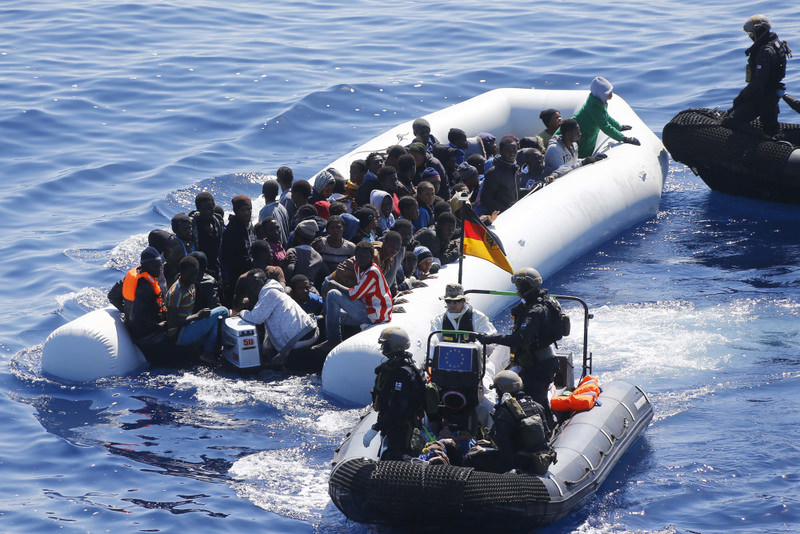 Survivors described the moments of disaster in another migrant tragedy that may have killed up to 500 people in the Mediterranean and remains unconfirmed. According to them, human smugglers got on another boat and left hundreds of people to die

A knife-wielding human trafficker prevented survivors of a shipwreck from pulling others to safety, leaving them to drown in the dark, one of the surviving migrants said on Thursday.

Up to 500 people are believed to have died in last week's disaster when an overcrowded boat sank in the southern Mediterranean. Just 41 people were eventually saved by a passing merchant ship and brought to Greece on April 16.

Muaz Mahmud, 25, from Oromia in Ethiopia, managed to escape the packed vessel as it was sinking and clambered onto a nearby boat. However, a human smuggler prevented them from helping others still in the sea, saying they had to leave immediately. "I told him: 'Don't start the motor please, we have to save these people.' He took a knife. 'I am going to kill you, we won't stay here,' and then I just cried," Mahmud told reporters, speaking in broken English. He had been with his wife and two-month-old, having paid $1,800 each. They are feared drowned.

While the handful of survivors recounted their tales of horror, families of those still missing, many of whom were believed to be from Somalia, described how their relatives had hoped to reach Europe and escape poverty.

In Somalia's bombed-out capital, the parents of Mohamed Farah, 25, are still awaiting word of his fate. His family and friends had scraped together thousands of dollars to help him to make the perilous trip over land and sea to Europe. They have been told his picture was not among those of the survivors.

"Is he alive or dead? His mother has not eaten food for days," said Ali Nur, his 23-year-old cousin and friend. "The agent is the criminal behind the disaster. He got rich from the Somalis drowning in the sea."

The stories from the survivors and grieving relatives give a clear timeframe for one of the worst such tragedies in recent years, showing not just the dangers of the journey but also the relative sophistication of the human trafficking ring.

More than 150,000 migrants reached Italy by boat last year, with some 25,000 arriving so far this year. About 800 are believed to have died trying to make the crossing since January.

Mohamed Farah left Mogadishu in early February, travelling through Somaliland, Ethiopia and Sudan before reaching Egypt. On April 8 he called home to say he was set to leave, having paid about $3,000 for his place on the boat. It is not clear when precisely he put to sea, but survivors have said one boat with up to 300 people aboard departed somewhere from Egypt, while a second, smaller boat, carrying up to 200, left from near Tobruk in eastern Libya.

Many hours after going out to sea, these two vessels met up in the dead of night, probably on April 13. The smugglers transferred almost everyone onto the bigger boat, at which point it started taking in water. Survivors and officials say that between 400-500 were probably on board when it sank.

"When this boat was sinking, we started swimming to save our life to the other boat. Some survivors on the other boat threw something to us. We were 10 people," Mahmud said.

With others still swimming toward them, the smuggler started the engine and abandoned them. "We saw the dead guys with our eyes," said Mowlid Isman, 28, from Mogadishu. Like Mahmud, he had managed to reach the smaller boat before it left. His sister and her baby did not and are feared drowned.

"Other peoples' families died too. There wasn't anything we could do because they were in the water [and] we moved away," he said, speaking through an interpreter. Survivors said the smuggler headed towards Italy but at a certain point he boarded a third boat to return to Libya. He promised to return with water and food, but never reappeared. He also left a satellite phone, with an Italian number for them to call. "I called. It was the police, I called them to help us," Mahmud said. One ship passed nearby but did not pick them up, he said. A second boat finally found them and took them to Greece.

The survivors – 37 men, three women and a 3 year old from Somalia, Ethiopia, Egypt and Sudan – said they had drifted at sea for three days. They are now in Athens and Greek nongovernmental organization Praksis said they had all been given a one-month permit to stay in the country.

The majority of migrants come from the Middle East and Africa. The turmoil in the Middle East and the five-year war in Syria have led many people to flee the conflict in an attempt to seek security and shelter in a more prosperous and peaceful country, such as one in Europe. However, Europe has been slammed for lacking a collaborative response to the crisis. More than 1 million migrants and refugees crossed the Mediterranean last year — mostly refugees from war in Afghanistan, Iraq and Syria fleeing to Greece and the European Union. However, the longer Libya-Italy route has traditionally seen more deaths.
Last Update: Apr 23, 2016 3:10 am