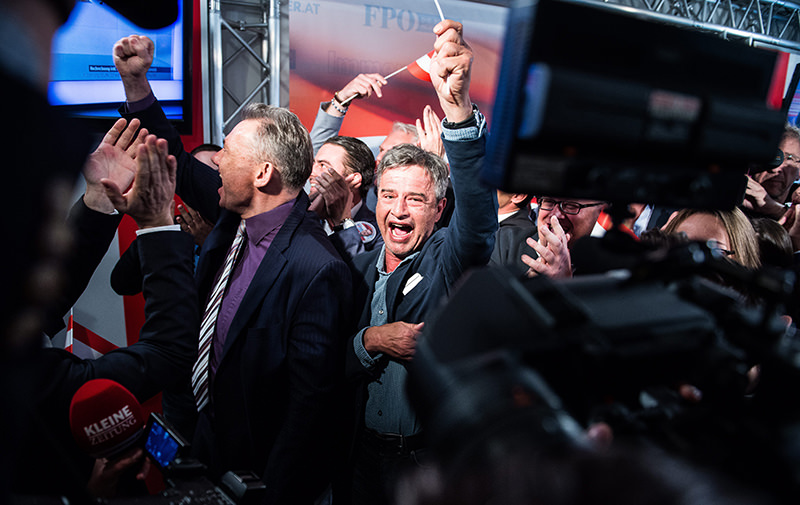 Members of the right-wing Austrian Freedom Party (FPOe) celebrate at the his party headquarters during Austrian presidential elections in Vienna, Austria, 24 April 2016. (EPA Photo)
by Daily Sabah with Wires Apr 24, 2016 12:00 am

Preliminary results show the far-right Freedom Party candidate has won the first round of the Austrian presidential election, reflecting the rise of the far-right and anti-migrant sentiment

Austria's government was licking its wounds Monday after the anti-immigration far-right candidate triumphed in presidential elections, in a debacle of historic proportions for a cozy political establishment seen as out of touch and ineffectual.

According to preliminary results, Norbert Hofer of the Freedom Party of Austria (FPÖ) came in on top with 36 percent of the vote in the first round of elections for the largely, but not entirely, ceremonial post of head of state.

Candidates from the two ruling centrist parties, which have effectively run Austria since the end of World War II, failed to even make it into a runoff on May 22, coming fourth and fifth with 11 percent each.

The result means that for the first time since 1945, Austria will not have a president backed by either Chancellor Werner Faymann's Social Democratic Party of Austria (SPÖ) or their center-right coalition partners, the Austrian People's Party (ÖVP). Having a president in the Habsburg dynasty's former palace in Vienna not from either of the two main parties could shake up the traditionally staid and consensus-driven world of Austrian politics. "This is the beginning of a new political era," FPÖ leader Heinz-Christian Strache said after what constituted the best-ever result at the federal level for the former party of the late Joerg Haider, calling it a "historic result."

The Österreich tabloid described Hofer's victory as a "tsunami that has turned our political landscape upside down." Hofer is "a kind, nice protest politician who wraps the FPÖ's brutal declarations against refugees in soft language." Faymann said Sunday the result was a "clear warning to the government that we have to work together more strongly." He said, however, that his party would not make any personnel changes, including with regard to his own position.

Facing Hofer on May 22 is likely to be Alexander van der Bellen, backed by the Greens, who garnered 20 percent ahead of third-place independent candidate Irmgard Griss, who won 18.5 percent. The only candidate who fared worse than the main parties' candidates was Richard Lugner, an 83-year-old construction magnate and socialite married to a former Playboy model 57 years his junior, who won just over 2 percent.

Far-right populist parties in France, Italy and Germany welcomed the FPÖ's victory in the first round of presidential elections as a protest against the European Union. The rise of fringe politicians has been mirrored across Europe, including in Spain, Britain and Germany, and also in the United States with the populist messages of Republican presidential candidate Donald Trump.

Marine Le Pen, leader of France's National Front, who is hoping to become president next year, tweeted Sunday her congratulations to the FPÖ for its "magnificent result. Bravo to the Austrian people."

"There is clearly a growing awareness among people in Europe that the EU is an anti-democratic structure that subjugates people," she added in an interview with broadcaster France 2. Frauke Petry, leader of Germany's anti-immigration Alternative for Germany (AfD) party, took to Twitter to congratulate Hofer.

Last year Austria received 90,000 asylum requests, the second highest in Europe on a per capita basis, and Faymann's government has taken a firmer line on immigration in recent weeks. But this has not stopped support for the FPÖ surging. Recent opinion polls put the party in first place with more than 30 percent of voter intentions ahead of the next scheduled general elections in 2018.

Support for the two main parties has been sliding for years and in the last general election in 2013 they only just garnered enough support to re-form their "grand coalition."

Austria's traditionally strong economy has also faltered of late and it no longer has the lowest unemployment rate in the European Union. Faymann's coalition, in power since 2008, has struggled to agree structural reforms. David Pfarrhofer from the Market polling institute said Sunday's result showed that the traditional parties cannot continue "messing around" if they want to cling onto power. "It's not so much about personalities but about issues. ... Something needs to change if the SPÖ and the ÖVP want to avoid another debacle like this," Pfarrhofer told Agence France-Presse (AFP). Reinhold Mitterlehner, head of the ÖVP, appeared to agree, saying late Sunday after the "disappointing" result that it was time to "relaunch" the coalition.

Europe has been witnessing a shift toward right-wing parties, which have been gaining popularity over fear of a refugee influx. Anti-immigration sentiments and xenophobia have become more visible in the country as a result of the efforts of political parties like the National Democratic Party of Germany (NPD) and AfD as well as anti-Islam and anti-immigrant initiatives like the Patriotic Europeans Against the Islamization of the West (PEGIDA), which have staged anti-immigrant rallies and have drawn thousands of people throughout Europe. Recently, polls noted a rise in support for right-wing parties in Austria, Denmark, Germany, Poland, Netherlands, France and Switzerland. Several far-right parties have called refugees streaming to the continent "terrorists," a "ticking time bomb" and a Muslim "invasion." Despite warnings from other European political figures, this rhetoric still survives and has gained ground across Europe.