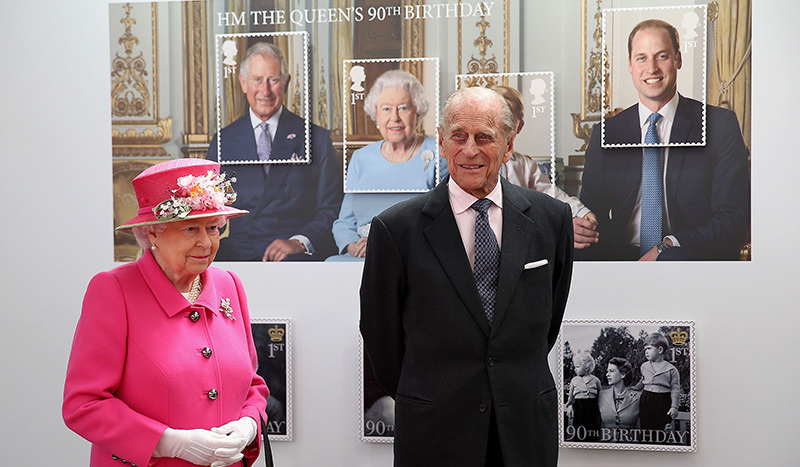 Britain's Queen Elizabeth II (L) and Britain's Prince Philip, Duke of Edinburgh pass a giant photograph taken to be used as part of a series of 10 Royal Mail postage stamps (AFP Photo)
by Apr 25, 2016 12:00 am

A rare handwritten letter from a young Queen Elizabeth II telling the story of her romance with Prince Philip before their 1947 wedding has been sold at auction.

The note, penned when she was a 21-year-old princess, recounts the early stages of their relationship from their rare meetings in wartime to the London dances they attended together.

Queen Elizabeth, who celebrated her 90th birthday on Thursday, went on to have four children with Philip, 94. The couple are now great-grandparents.

The two-page letter, written to the author Betty Shew, was bought for £14,400 ($20,750, 18,475 euros) by a private collector from Britain when it was sold at Chippenham Auction Rooms in southwest England on Saturday.

Shew was writing a book called "Royal Wedding" as a souvenir of the marriage, and the young princess agreed to share details of her relationship with her naval officer fiance, who was born a prince of Greece and Denmark.

"The first time I remember meeting Philip was at the Royal Naval College, Dartmouth, in July 1939, just before the war. (We may have met before at the coronation or the Duchess of Kent's wedding, but I don't remember)," the future monarch wrote.

"I was 13 years of age and he was 18 and a cadet just due to leave. He joined the Navy at the outbreak of war, and I only saw him very occasionally when he was on leave -- I suppose about twice in three years.

"Then when his uncle and aunt, Lord and Lady Mountbatten, were away he spent various weekends away with us at Windsor. Then he went to the Pacific and Far East for two years as everyone there will know."

She said the wedding ring was to be made of Welsh gold and her fiance designed it himself.

"I don't know the history of the stone, except that it is a very fine old cutting. It was given to me not long before the engagement was announced."

She told of how Prince Philip danced with her at two London nightclubs and spent six weeks with the royals at Balmoral, their Scottish private retreat.

"We both love dancing -- we have danced at Ciro's and Quaglino's as well at parties," she wrote.

"We first started seeing more of each other when Philip went for a two-year job to the R.N Petty Officers School at Corsham -- before that we hardly knew each other.

"He'd spend weekends with us, and when the school was closed he spent six weeks at Balmoral -- it was great luck his getting a short job first them! Elizabeth."