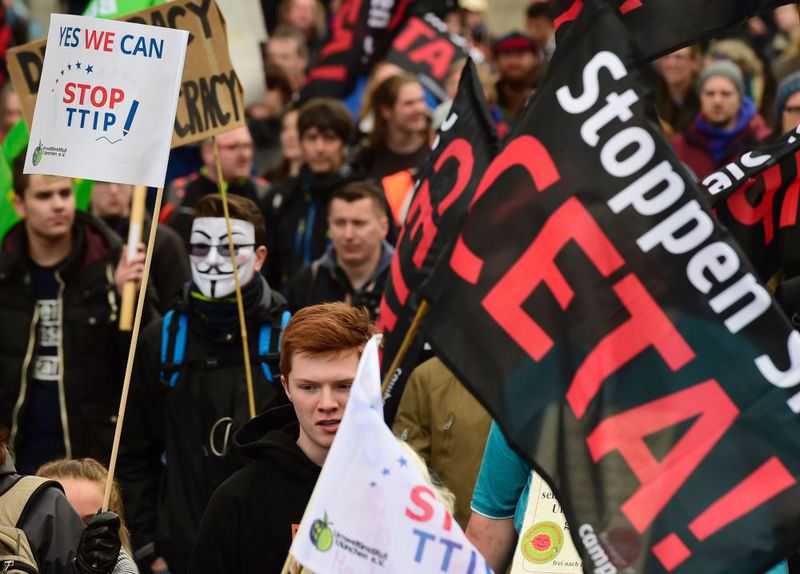 U.S. President Obama arrived in Germany yesterday to advance negotiations on the Transatlantic Trade and Investment Partnership agreement. One day before his arrival, around 35,000 people protested the deal while leaders suggest the deal is a win-win situation

Tens of thousands of opponents of a proposed transatlantic trade deal poured onto German streets Saturday on the eve of a visit by U.S. President Barack Obama.

A loose coalition of trade unions, environmentalists and consumer protection groups in the northern city of Hanover said they drew a crowd of 90,000 to a march and rally outside the city's opera house. Police mobilized a large force to keep the peace and put attendance at 35,000.

Obama's trip - to open an industrial technology fair and hold talks with Chancellor Angela Merkel and other European leaders - was intended to lend momentum to flagging efforts to see the world's biggest trade pact finalized this year.

The Transatlantic Trade and Investment Partnership (TTIP) has run into major opposition, not least in Europe's top economy Germany, where critics have raised the specter of eroding ecological and labor market standards and condemned secrecy shrouding the talks.

As the whistle-blowing crowd moved through Hanover in unseasonably cold weather, one banner reading "Don't give TTIP a chance" featured the image of a bull tagged "privatisation" and a cow branded "democracy." A mock coffin was emblazoned with the words "Democracy killed by money."

Dieter Berlin, a 73-year-old pensioner, attended the rally with his wife Hanna, waving a banner reading "No GMOs on our plates" in a reference to genetically modified foods. Berlin said he had turned out over fears of a race to the bottom with free trade. "We want to keep our educational standards, not adopt the American educational system. And we want to hold onto our environmental standards too," he said. His friend Heino Kirchhof, 73, said TTIP would widen the gulf "between poor and rich - that is going to threaten the stability of the world."

Another demonstrator, 38-year-old Ladislav Jelinek of the Czech Republic, said he worried that pollution and food safety protections could be hollowed out by the treaty. "There is no need to damage the environment more than we already did," he said. "European society doesn't need to progress at the expense of animals, water and the air."

A similar protest in October in Berlin drew up to 250,000 people, according to organizers, signaling an uphill battle for the deal's passage.

In a video statement on Saturday, Merkel insisted that TTIP would not ride roughshod over citizens' rights or interests. "We don't want people to have the impression that something is being hushed up here, or that norms are being undermined. The opposite is true," she said.

In what she called a "win-win situation," Europe and the United States had the opportunity to agree on environmental and consumer protection principles that, due to the massive size of the market, "could set global standards." After talks with Obama on Friday, British Prime Minister David Cameron also insisted TTIP "would add billions to our economies and set the standards for the rest of the world to follow."

The Hanover meeting comes just before a 13th round of TTIP negotiations starts in New York on Monday. But scepticism in the face of those arguments is growing in Germany, and Economy Minister Sigmar Gabriel admitted this week: "It is possible that TTIP will fail."

Just 17 percent of Germans say they support TTIP, according to a Bertelsmann Foundation poll of more than 3,000 people published Thursday, well down on the 55 percent registered two years ago. During the same period, firm opposition to the pact rose to 33 percent from 25 percent. The picture in the United States is hardly more promising. The "Yes" camp has shrunk to 15 percent from 53 percent, while nearly half - 46 percent - say they feel too ill-informed to have an opinion.

Given the lack of political capital available to a "lame duck" president, U.S. and European analysts said, the White House was more likely to aggressively pursue ratification of one of Obama's signal achievements, the Trans-Pacific Partnership trade deal (TPP) with Asia, than to struggle to complete negotiations on TTIP.
RELATED TOPICS