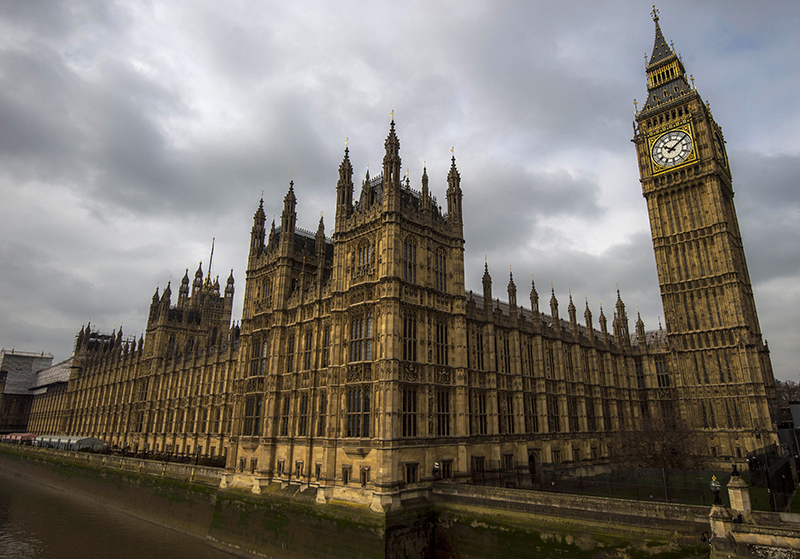 It's so long to Big Ben 's bongs — at least temporarily.

British officials announced Monday that the famous bell of Parliament will fall silent for several months during repairs to its crumbling clock tower.

The work, due to begin in January 2017 and last three years, is the biggest repair job on the tower for decades — and Steve Jaggs, Parliament's Keeper of the Great Clock, said it can't wait much longer.

"The tower is not unstable," he said. "But unless we do something now it's going to get a lot worse.

"We need to do the work pretty soon to keep this for future generations to enjoy."

Jaggs said the 29 million pound ($42 million) renovation will include work to repair corrosion to the cast-iron roof and to stop water seepage that threatens to damage the stonework on the iconic 160-year-old building.

The huge clock will be stopped for several months so that Parliament's clockmakers can work on the 13-foot (4-meter) pendulum and remove the hands from each of the four faces.

The 13.5 ton Big Ben bell will cease to sound the hours for another stretch of the project while it is cleaned and checked for cracks.

Officially named the Elizabeth Tower in honor of Queen Elizabeth II, the structure is one of London's most famous landmarks. It became a symbol of defiance when it survived German bombing raids during World War II — though one of the four clock faces was blown out.

The tower is popularly known as Big Ben, though that is actually the name of the largest of its five bells. The four smaller bells chime the quarter hours, while Big Ben bongs out the hour.

The sound of the bongs became associated with Britain around the world during wartime BBC news broadcasts, and is still played live each day on BBC radio through a microphone in the belfry.

Jaggs said workers will make sure that Big Ben still chimes at midnight on New Year's Eve throughout the renovations.

The repair work will use traditional methods and materials as much as possible, but a couple of modernizations are planned.

The 28 lightbulbs behind each clock face will be replaced with energy-efficient LED bulbs that can change color, so the clock tower can be tinted to mark major celebrations or commemorations.

And there are plans to install an elevator in a ventilation shaft. Currently the only way to the belfry is up a 334-step circular staircase.

The tower repairs are only a small part of the work that needs to be done to shore up a Parliament complex beset by damp and decay.

A report released last year said the 19th-century neo-Gothic structure needs major repairs that could cost up to 7 billion pounds ($11 billion) to remove the risk of a "catastrophic failure." One option under discussion would see lawmakers move out for up to six years while the work is done.

Jaggs said that even if the rest of the building is empty and under scaffolding, the tower "will still be a beacon of democracy around the world."