Lufthansa to cancel almost 900 flights in Germany over strike, thousands to be affected 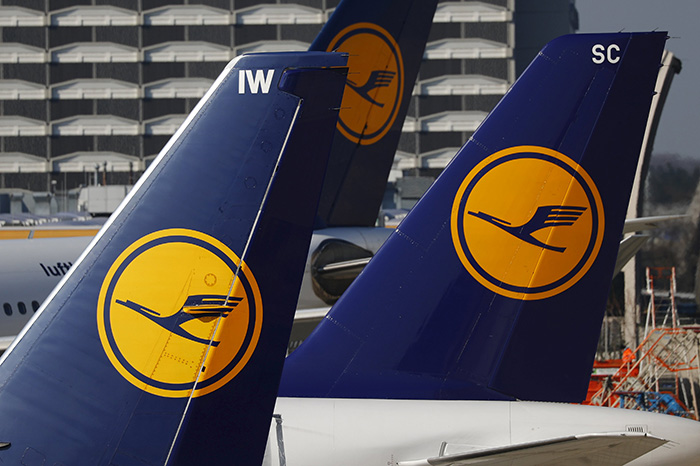 Planes of the Lufthansa airline stand on the tarmac in Frankfurt airport, Germany, in this file picture taken March 17, 2016 (Reuters Photo)
by Compiled from Wire Services Apr 26, 2016 12:00 am

Lufthansa will cancel almost 900 flights in Germany Wednesday when airport ground staff are expected to join a strike called by services union Verdi, the carrier said.

Some 87,000 passengers will be affected and 895 Lufthansa flights scrapped because of the strikes at Frankfurt, Munich, Duesseldorf, Cologne/Bonn, Dortmund and Hanover airports, it said.

Only 40 percent of an overall roughly 1,500 flights to an from German airports including hubs Frankfurt and Munich would take place, the airline said in a statement.

The strike action, which will include staff in mechanical workshops, ground services and air safety control, will cause cancellations and delays at Frankfurt, Munich, Dusseldorf, Cologne/Bonn, Dortmund and Hanover airports, the carriers said late Monday.

Verdi - one of Germany's biggest labour unions - has organized the industrial action in order to increase the pressure in an ongoing battle with local and federal governments over public sector wages. The union is pushing for a 6-per-cent rise.

"Employers should review their stance and their offer, so that a solution can be found during the third round of negotiations on Thursday and Friday," Frank Bsirski, the head of Verdi, told local newspaper Ruhr Nachrichten on Tuesday.

Lufthansa passengers on domestic flights were being given the option of rail tickets free of charge, irrespective of whether or not their flight will be affected by the strikes, the company said.

Air Berlin, Germany's second-largest airline, said passengers affected by the strikes could change their flight free of charge to any date between April 28 and May 4.

In November, Lufthansa flight attendants staged the longest and most expensive strike in the company's history, costing the company an estimated 140 million euros (158,000 dollars).