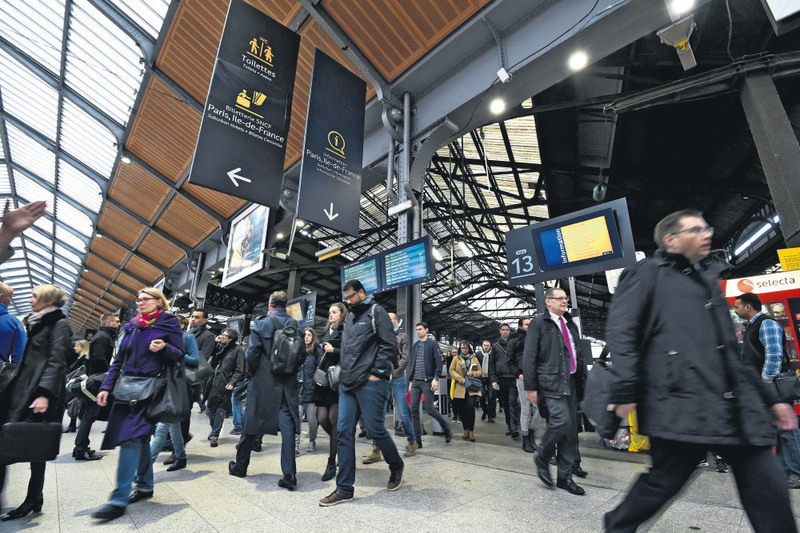 by Compiled from Wire Services Apr 27, 2016 12:00 am
French train services were severely disrupted on Tuesday, as tens of thousands of state rail workers protested over plans to reduce rest periods and other protective work practices in preparation for Europe-wide deregulation.

The third strike in two months halved high-speed train services and cut other intercity rail journeys to as few as one in three remaining, although international Eurostar and Thalys connections appeared largely unaffected by the 24-hour stoppage.

At issue is a fundamental rewrite of working conditions, which management at the French National Railway Company (SNCF) hopes will enable it to cope when EU-wide legislation throws national passenger services open to competition in 2020. "For the moment this is just a massive warning strike," said Philippe Martinez, head of the large and hardline General Conferation of Labor (CGT) union.

With the exception of Britain, which entirely privatized its railways in the 1990s, most EU countries have limited deregulation to the pace set by common accord at European Union level, starting with freight in 2006 and a few cross-border links thereafter.

France's TGV (high-speed train) network is the world's second-biggest high-speed network after Japan, and so the stakes are particularly high. A staff of around 150,000 has been criticized as enjoying enviable job and pension rights under decades of monopoly status. Although support for the strike is predictable from more militant unions such as the CGT and Sud-rail, the latest stoppage is also being backed by unions like the more conciliatory French Democratic Confederation of Labor (CFDT), on the grounds that low-cost competition should not set the standard. "The CFDT will never put its name to a regression in work and transport safety standards," said the CFDT union in a statement explaining why it was joining Tuesday's strike call.

The CFDT and other unions are angry over a proposal seeking to scale back myriad guarantees that would, for example, align the number of work-free weekends per year with those which lower level private operators accord their staff.

The proposal – the first draft, on which an agreement is being sought by July – is part of a broader package that is set to establish a standard across the rail passenger sector when it is opened up to full-on competition, firstly on high-speed lines in 2020, and more broadly in 2026.

Beyond the chaos caused for commuters heading into large urban centers such as Paris, local media highlighted that the impact of the train strike was mitigated by people travelling by coach. This form of transport has mushroomed as a low-cost alternative in France, since the Socialist government liberalized that business last year.

German airline Lufthansa announced it cancelled 895 flights scheduled for Wednesday from six airports in Germany, as government workers there call for short-term strikes in the run-up to wage discussions later this week. The airline said yesterday that its hubs in Munich and Frankfurt would see the most disruption.

Public-sector workers doing ground handling and security checks were expected to walk off the job. Lufthansa, which is not part of the negotiations, urged passengers to check their flight status on LH.com.