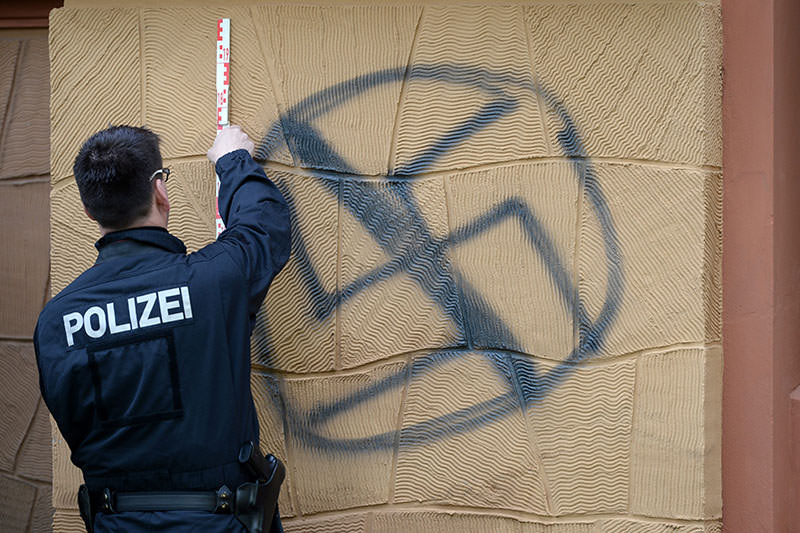 A policeman securing evidence of a crossed swastika sprayed on the facade of the house of AfD party deputy Alexander Gauland in Potsdam, Germany, 26 April 2016. (EPA)
by Daily Sabah with AFP May 02, 2016 12:00 am

German right-wing party AfD has adopted an anti-Islam manifesto, saying Islam is not “compatible with the constitution.” Thousands of people protested the new campaign and many accuse it of being a xenophobic party

Germany's right-wing populist AfD party Sunday adopted an anti-Islam policy in a manifesto that also demands curbs to immigration, as a poll showed it is now the country's third strongest party.

Formed only three years ago on a eurosceptic platform, Alternative for Germany (AfD) has gained strength as the loudest protest voice against Chancellor Angela Merkel's welcome to refugees that brought in over 1 million asylum seekers last year.

With the migrant influx sharply down in recent months, the AfD has shifted focus to the signature issue of the xenophobic Patriotic Europeans Against the Islamization of the Occident (PEGIDA) street movement. "Islam is not part of Germany," ran a headline in the AfD policy paper, agreed in a vote by some 2,400 members at the party congress in the western city of Stuttgart.

The paper demanded bans on minarets on mosques, the call to prayer, full-face veils for women and headscarves in schools. A proposal for a more nuanced formulation - to "stop Islamism but seek dialogue with Islam" - was rejected with boos in the mostly-male gathering, which was held in a hall decorated with banners that read "Courage. Truth. Germany." "Islam is in itself political," retorted one speaker, while another linked the religion with "sharia, suicide bombings and forced marriages."

More broadly, the AfD is presenting itself as a nationalistic conservative force that also questions climate change, promotes traditional gender roles and "family values", would reintroduce military conscription and take Germany out of the euro.

The weekend congress restated its hostility to the single currency, vowing to end "the euro experiment" via a referendum on whether or not Germany should remain in the eurozone. The party meeting, which closed Sunday, also agreed on a simplified tax system for its manifesto, notably aiming to ease the burden on those with low incomes and families.

Co-leader Joerg Meuthen said the AfD stood for a "modern conservatism" and a "healthy patriotism" while it rejected "the Germany of 1968, infected by the (socialist and environmentalist) red-green left."

Having entered half of Germany's 16 state parliaments, the AfD - seen as the country's answer to France's National Front and Austria's Freedom Party - has now firmly set its sights on national elections next year. "In the summer of 2015, they gave us up for dead," a triumphant AfD Co-Chair Frauke Petry told the delegates, declaring that the party does not intend to settle for the role of opposition group or junior coalition partner. Instead, its new program should allow the AfD "to win majorities," she told the gathering.

Support for the AfD stood at 13 percent, narrowly beating the ecologist Greens as Germany's third strongest party, according to an Emnid institute survey for the newspaper Bild am Sonntag.

The party has been at pains to distance itself from the hardcore far-right and neo-Nazi movements, which are a stubbornly persistent but fringe phenomenon in a country where collective shame over the Nazi era and the Holocaust runs deep. Alexander Gauland, leader of the party in Brandenburg state in the former communist East, cautioned delegates to generally temper their statements and "keep in mind that all of Germany is watching us." To drive home that message, the congress voted with 52 percent support to dissolve the Saarland regional party chapter because of its deep links with right-wing extremists groups.

To its many critics, however, the AfD represents xenophobia and a backward-looking isolationism. On Saturday hundreds of anti-fascist demonstrators rallied outside the convention center, with some burning tyres and hurling firecrackers.

Aside from drawing the anger of left-wing groups, the AfD has also attracted near-universal condemnation from Germany's major parties.

The general secretary of Merkel's Christian Democrats, Peter Tauber, told the Bild am Sonntag newspaper: "The debates at the party congress show that the AfD wants to return to a Germany that never existed in that form. "That isn't conservative, it's reactionary."

Recently, support for far-right populist parties across Europe has been surging especially over fears of a refugee influx fleeing violence and persecution in the Middle East and Africa. Political parties like the AfD in Germany or Front National (FN) in France have adopted a strong anti-immigrant and anti-Muslim discourse. Anti-immigration sentiments and xenophobia have become more visible in the country as a result of the efforts of anti-Islam and anti-immigrant initiatives like PEGIDA that have staged anti-immigrant rallies and drawn thousands of people throughout Europe. Despite warnings from other European political figures, Islamophobia and xenophobic rhetoric still survive and have gained ground across Europe.