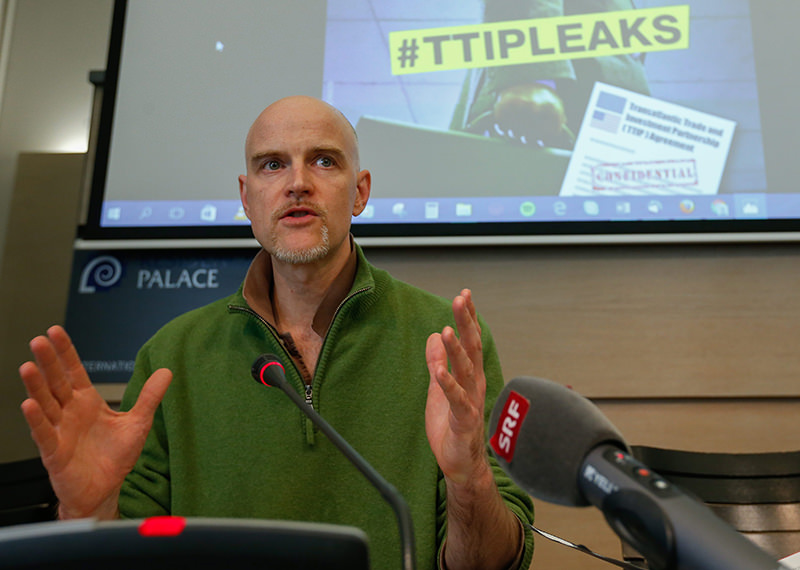 Jorgo Riss, the director of Greenpeace EU, addresses a news conference to comment the findings from analysis of the negotiating texts of the Transatlantic Trade and Investment Partnership. (EPA Photo)
by reuters
May 02, 2016 12:00 am

A sweeping free trade deal being negotiated between the European Union and the United States would lower food safety and environmental standards, Greenpeace said on Monday, citing confidential documents from the talks.

But the European Commission said the documents reflected negotiating positions, not any final outcome, and the EU's chief negotiator dismissed some of Greenpeace's points as "flatly wrong."

The U.S. Trade Representative's office also rejected them. While it would not comment on the "validity of alleged leaks," a spokesman said "the interpretations being given to these texts appear to be misleading at best and flat-out wrong at worst."

Greenpeace opposes the proposed Transatlantic Trade and Investment Partnership (TTIP), arguing with other critics that it would hand too much power to big business at the expense of consumers and national governments.

Supporters say the TTIP would deliver more than $100 billion of economic gains on both sides of the Atlantic.

Greenpeace Netherlands published 248 pages of "consolidated texts" for 13 chapters, or about half, of the deal on the website TTIP-leaks.org on Monday. They date from early April, before a round of meetings in New York last week.

"We've done this to ignite a debate," Greenpeace trade expert Juergen Knirsch told a news conference in Berlin, adding that the documents showed the negotiations should be halted.

"The best thing the EU Commission can do is to say 'Sorry, we've made a mistake'."

European Trade Commissioner Cecilia Malmstrom called the leak a "storm in a teacup" and told an audience in Geneva the EU would not compromise its principles just to get a deal before U.S. President Barack Obama leaves office in January 2017.

"If it is not good enough we just have to say 'Sorry but we have to put this on ice' and wait for the next administration. Obviously we lose time and momentum but we cannot agree to TTIP-lite or something that's not good enough," she said.

The White House had no comment on the veracity of the documents but said the leak was unlikely to derail negotiations.

"There is the potential, and we certainly are aiming, to complete these talks by the end of the year, and I don't think there's anything about this leak that is going to have a material impact on our ability to do that," White House spokesman Josh Earnest told reporters on Monday.

Greenpeace said the documents showed differences had become entrenched between the two sides of the Atlantic. Malmstrom said it was "not very dramatic" to say there were disagreements and the EU was being as open as possible about the negotiations.

Knirsch said the texts showed the United States wanted to replace Europe's "precautionary principle" - which prevents potentially harmful products from coming to market when their effect is unknown or disputed - with a less stringent approach.

Malmstrom said the precautionary principle was part of the "acquis" - the laws binding the EU together - and Greenpeace's assertion was not true.

Malmstrom called on EU governments to do more to explain TTIP's merits to their populations.

NO CHANGES ON GMOS

In Europe, there is widespread opposition to allowing more imports of U.S. agricultural products due to concerns about genetically modified foods.

In Brussels, EU chief negotiator Ignacio Garcia Bercero dismissed Greenpeace's comments on the precautionary principle, adding: "We have made crystal clear that we would not agree on anything that implies changes of our regulatory regime on GMOs (genetically modified organisms)."

The negotiators aim to have "consolidated texts" by July, when a 14th round of talks is due to be held. They would then try to settle the thornier issues in the second half of 2016.

A survey published last month by the Bertelsmann Foundation showed waning support for a TTIP deal in both Germany and the United States after three years of negotiations.

A spokesman for the German government said it was still working to complete a deal. An Economy Ministry spokeswoman said Germany would not accept lower food safety standards.