Chinese police to patrol streets of Italy under new agreement 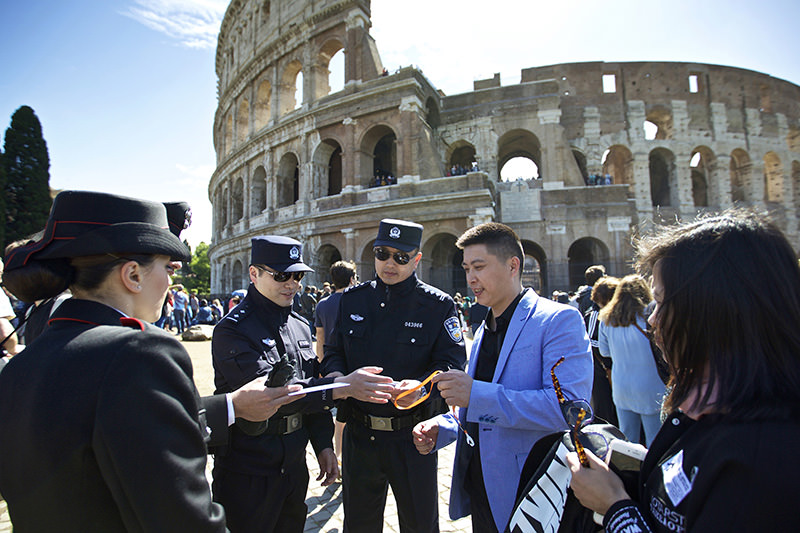 Chinese policemen are in Italy to start patrols with Italian officers in Rome and Milan in a two-week experiment. (AP Photo)
by Anadolu Agency May 03, 2016 12:00 am

In a historic first, Chinese police started patrolling the streets of Italy on Tuesday, under a new agreement between Italy and China.

Italy, which attracts some 3 million Chinese tourists a year, will exercise the agreement with Chinese police officers walking the beat in Rome and Milan.

The program in both cities has started and will last for two weeks, according to the Italian Interior Ministry's website.

The deal marks the first time ever China has sent its police officers to serve abroad.

The inauguration of the agreement was held yesterday in Rome, in a ceremony with Italian Interior Minister Angelino Alfano and China's Ambassador to Rome Li Ruiyu in attendance.

"Today is an important day," said Alfano, "because it embarks on an unprecedented initiative, a pilot project, which will also spread to other cities, strengthening police cooperation, and will see Italy as a starting point for all of Europe."

"This police cooperation is essential for cooperation between countries," said Li Ruiyu. "The agreement is the first of its kind with a European country, and shows the importance of seeking to protect Chinese citizens."

"The agreement will entice more and more Chinese to visit Italy," he added.

Under the program, Chinese police officers, armed with ample Italian-language training, will patrol the streets alongside their Italian counterparts.