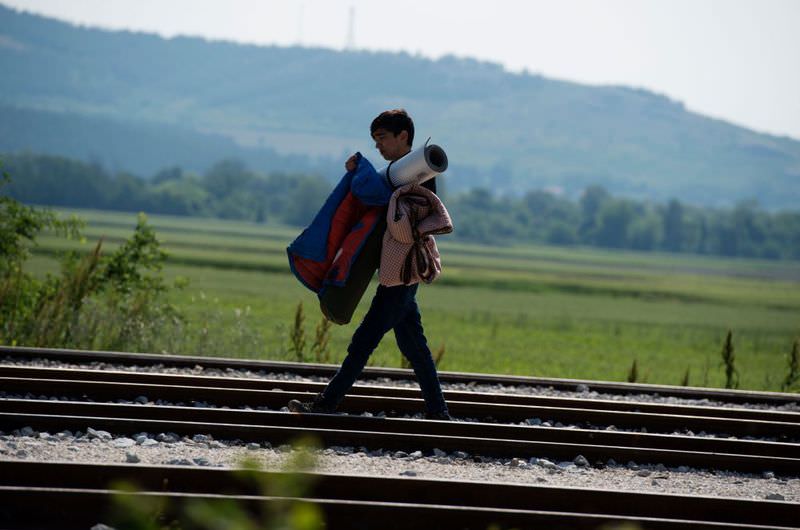 A young man walks along rail tracks at a makeshift camp for refugees at the Greek-Macedonian border near the village of Idomeni on May 1.
by Daily Sabah with AFP May 06, 2016 12:00 am

A 16-year-old Syrian refugee who arrived in Britain without his family was unlawfully locked up by the British Home Office, according to media reports. Meanwhile, British PM Cameron announced more Syrian child refugees will be allowed into the country

An unaccompanied Syrian refugee, who traveled across Europe through nine countries and safely reached the U.K., was unlawfully held by the British Home Office for nearly a month since officials did not believe he was 16, The Guardian reported on Wednesday.

The 16-year-old left Syria last year, leaving his family behind in Damascus. He traveled through Lebanon, Turkey, Greece, Macedonia, Serbia, Hungary, Austria, Germany and France for eight months. In the end, he managed to arrive in the U.K. and claimed asylum on March 20, according to The Guardian. The teen claimed he had been kidnapped by Syrian government officials and tortured, which was confirmed by a Home Office doctor as his injuries were consistent with torture.

The boy reportedly has an uncle in the country who had the child's Syrian passport and his civil registration record. The papers showed his date of birth as Aug. 25 1999. However, a Home Office official declined to check the documents and decided he was over 18, and then he was locked up at Tinsley House immigration removal centre for 26 days. According to British law, under-18s should not be detained in this way. Lord Alf Dubs of the Labour party, who was himself a child refugee fleeing Nazi Germany, said the case is "appalling" and called on the Home Office to explain what was going on.

After the boy's solicitors appealed for an urgent judicial review of his application to secure his release from detention, the Home Office "conceded it had detained a child and released him into the care of social services, 26 days after locking him up," The Guardian reported.

Dubs called the incident shocking, and said: "This young person had the right to claim asylum but was treated in such an appalling way which breaches all our traditions." According to The Guardian, more than 30 children who were unlawfully held by officials were released between January 2015 and March 2016.

International rights groups have long warned that unaccompanied children, who are already affected by violence in their home countries, are the most vulnerable group among thousands of asylum seekers who travel across Europe.

Meanwhile, U.K. Prime Minister David Cameron announced Wednesday that Britain will admit a limited number of child refugees who have traveled alone from Syria to Europe, in a U-turn on the politically charged issue of migration.

The government's change of heart is a victory for Dubs, an 83-year-old member of Britain's House of Lords, who argued that the country should be more compassionate, citing his own story of fleeing the Nazis as a child in 1939. Around 95,000 unaccompanied children applied for asylum in the EU last year, a fourfold increase from 2014, according to figures published by the Bureau for Investigative Journalism last month. Cameron said unaccompanied Syrian children who had registered in Greece, Italy or France before March 20 – when the European Union signed a deal with Turkey to curb new arrivals – would be considered. "We are going to do more for children who were already registered in Europe before the EU-Turkey deal," Cameron said in the House of Commons. "But we must stick to the principle that we shouldn't be encouraging people to make that perilous journey."

Cameron's announcement was seen as a bid to head off probable defeat in a parliamentary vote next week on a legislative amendment tabled by Dubs. The peer – who came to Britain from Prague aged six in a scheme known as the Kindertransport, in which hundreds of Jewish children were rescued – told Agence France-Presse (AFP) he was "delighted."

"When you use the word immigrants and refugees, it's not always popular with some people. I'm very sad about that, but certainly when we talk about child refugees, people responded," Dubs said. "As a country, we have a good humanitarian tradition which has been somewhat lacking in the recent past and I think the public felt we should be doing this."

The government has not said how many children will be allowed to come to Britain, saying it needs to talk to local authorities about how many they can cope with. A senior Downing Street source speaking anonymously to reporters said it would be "more than just tens".

Cameron's government believes it is best to offer help to refugees who have fled to camps in neighboring countries like Jordan and Lebanon rather than encouraging them to take the risk of traveling to Europe. It is sending aid worth 2.3 billion pounds ($3.32 billion) and said last year it would take 20,000 refugees from camps in the region over five years. Lliana Bird, co-founder of the Help Refugees charity, which works mainly in Calais in northern France and Greece, welcomed Cameron's announcement but said Britain should help more. Bird had recently returned from the Idomeni camp on the Greek border with Macedonia and called camp conditions in Europe "shocking." "There are children being forced to live outside in the forest, facing illness, incredibly vulnerable to traffickers, to sexual exploitation," she said.
RELATED TOPICS