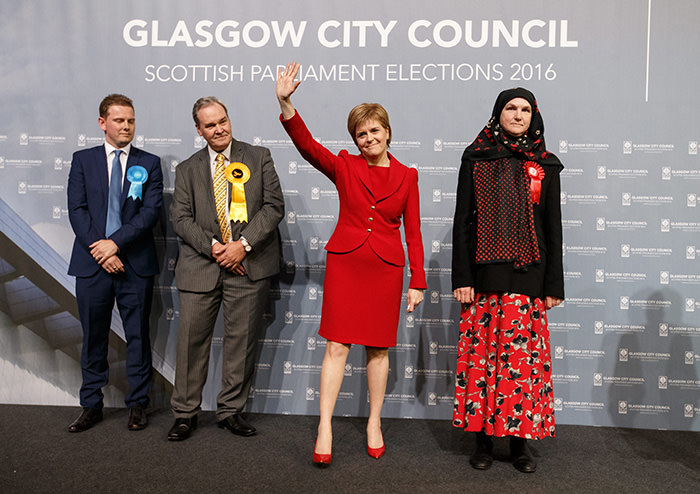 Leader of the Scottish National Party (SNP), Nicola Sturgeon (C) reacts after being re-elected to serve Glasgow Southside at the Emirates Arena in Glasgow, Scotland, Britain, 06 May 2016 (EPA Photo)
by May 06, 2016 12:00 am

Scottish nationalists have won a third term in power, simultaneously losing the outright majority on Friday in part of a series of local and regional elections seen as a key test for Labour leader, Jeremy Corbyn.

Britain's main opposition Labour party came in third with voters for Scotland's devolved parliament, but the candidate for the party, Sadiq Khan, was expected to clinch victory in London to become the city's first Muslim mayor.

Left-wing Corbyn, under pressure from centrists in his party since he took power last year, insisted his party was "hanging on" and had surpassed expectations. "All across England last night, we were getting predictions that we were going to lose councils. We didn't," he said. "We hung on and we grew support in a lot of places."

While the results may have done enough to dampen talks of a leadership challenge to Corbyn for now, they will not ease disquiet among some deputies regarding his leadership.

With the results from 87 councils being reported, Labour had 43, down one, and 846 seats, down 22. Prime Minister David Cameron's conservatives had control of an unchanged 23 councils and 520 seats, up seven.

North of the border, Nicola Sturgeon, leader of the pro-independence Scottish National Party (SNP), claimed the result as a major victory as her party seeks a mandate a move towards the second independence referendum. "What is now beyond a shadow of a doubt is that the SNP has won a third consecutive Scottish Parliament election." Sturgeon said. "We have made history tonight."

However, 63 of the 129 seats won by the SNP fell short of polling ahead of the election which had suggested the party would retain its majority. The SNP, which previously had 69 seats, will now have to seek the support of a smaller party to govern, like the Greens.

The voting day, dubbed "Super Thursday," came after a few bitter weeks of political sniping between the Conservatives and Labour.

Corbyn set up an inquiry into claims of anti-Semitism and racism in Labour after former London mayor Ken Livingstone was suspended from the party for claiming that the infamous Nazi dictator Adolf Hitler supported Zionism. Several other Labour politicians were also suspended.

Cameron himself is still grappling with deep splits in his party ahead of the June 23 referendum on Britain's membership in the EU. Some tallies are expected to stretch into the weekend as 45 million eligible voters have been asked to cast their ballots across England, Wales, Scotland and Northern Ireland.

Aside from the SNP's win, the other big story in Scotland was the success of the Scottish Conservatives, who came second with 31 seats. The party has been widely unpopular in Scotland since the 1980s during Margaret Thatcher's time as prime minister, but the tables have turned since the current leader, Ruth Davidson, came into office. Davidson is an openly gay, 37-year-old leader whose cheery, no-nonsense style and proficient use of social media has fueled her party's success. The decline of Labour – Scotland's previously dominant party which has now dropped to third with 24 seats – also helped.

Sturgeon has said that June's referendum on Britain's EU membership could fuel calls for another independence vote if Britain, as a whole, chooses to leave the EU but Scotland votes to stay in. Scotland rejected independence at a referendum in 2014.

Scottish parliament has devolved powers from Westminster over the majority of domestic policy issues, including health and education. In Wales, Labour won by far with the most seats – 29 out of 60, down one – meaning it retains power in the devolved administration for a fifth successive term.
Last Update: May 06, 2016 4:44 pm
RELATED TOPICS