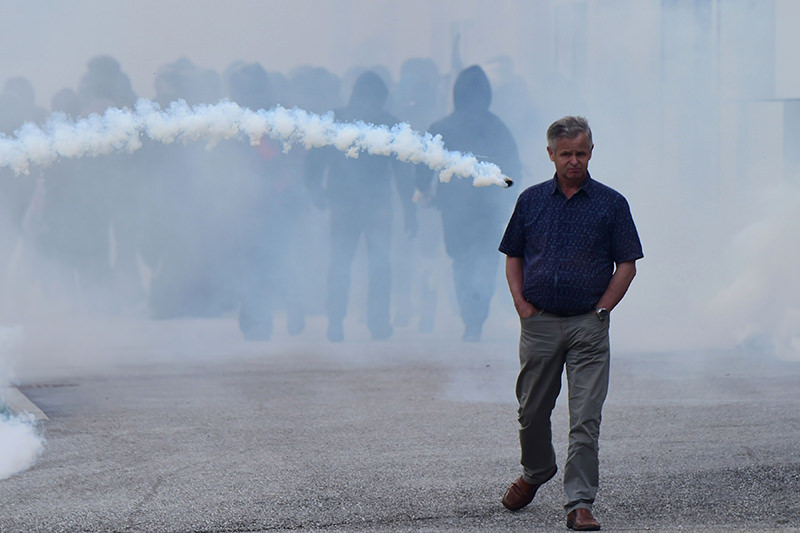 A man walks along a street as a smoke bomb is thrown during clashes between 'No border' activists andItalian police at the Brenner train station on May 7, 2016. (AFP Photo)
by Compiled from Wire Services May 08, 2016 12:00 am

The protesters, who briefly occupied the small train station at the Brenner Pass, were confronted by police as they tried to cross the border from Italy into Austria. Some threw stones and smoke bombs at police who responded with tear gas, an AFP photographer at the scene reported.

Two police officers were wounded and a police car was torched while several protesters were arrested, according to Italy's AGI news agency.

Vienna is threatening to resume checks on the Brenner Pass between the two countries as part of a package of anti-migrant measures if Italy does not do more to reduce the number of new arrivals heading to Austria. But imposing controls on the Austrian border with Italy would be a "political catastrophe" for Europe, European Commission President Jean-Claude Juncker said Saturday. The Alpine route is a major European transport corridor and a key link between the north and south of the continent, said Juncker during an interview with Germany's Funke Mediengruppe.

"This is why everything that blocks the Brenner Pass will have not just serious economic consequences, but most importantly heavy political consequences," he said.

With over 28,500 migrants arriving since Jan. 1, Italy has once again become the principal entry point for migrants arriving in Europe, following the closure of the Balkan route up from Greece. In previous years, many migrants landing in Italy have headed on to other countries including Austria but Rome now fears it could be stuck hosting thousands of new arrivals.

On average 2,500 lorries and 15,000 cars travel daily through the Brenner Pass - a crucial lifeline for Italy's exports to northern Europe that is already prone to delays even without border checks. Austria sits at the crossroads of the two major migrant routes, from the Balkans and from Italy, and saw hundreds of thousands of migrants cross its territory in 2015. Authorities have received around 90,000 asylum applications from people fleeing war, persecution and poverty who have opted to settle in the country.

Juncker also raised the alarm over Austria's response to the migrant crisis, which he said had tempted other countries to close their borders while making far-right politics "presentable" elsewhere in Europe. "What we see in Austria we have unfortunately seen in other European countries, where (political) parties play with people's fears," he said.

The anti-immigration candidate from Austria's far-right Freedom Party, Norbert Hofer, is the favorite to win the presidential run-off election on May 22.

Meanwhile, Almost 2,000 far-right protesters marched through Berlin on Saturday to demand that Chancellor Angela Merkel step down for allowing more than a million migrants from the Middle East into Germany since last year.

Under the motto "Merkel must go," demonstrators gathered outside Berlin's central train station waving German flags and holding up posters reading "Islamists not welcome" and "Wir sind das Volk" ("We are the People"), a slogan coined by the protesters who ended communist rule in East Germany, adopted last year by the anti-Islam PEGIDA (Patriotic Europeans Against the Islamization of the Occident) movement.

The rally drew around 1,800 participants, police said, less than half the number organizers had expected, and the protesters were outnumbered by around 7,500 left-wing counter-demonstrators who also marched through the capital.

A spokesman for the police said there had been scuffles when several left-wing demonstrators tried to break through barriers separating the two groups, and threw bottles at police. Police used tear gas and made several arrests, the spokesman said, adding that the situation had quickly been brought under control.

While many Germans have welcomed the new arrivals, others say the country cannot cope with integrating them and risks losing its identity.

Support for the anti-immigrant Alternative for Germany party has risen sharply, while arson attacks on refugee centers and sometimes violent protests have become increasingly common.