French government to force through labor reform without parliament vote 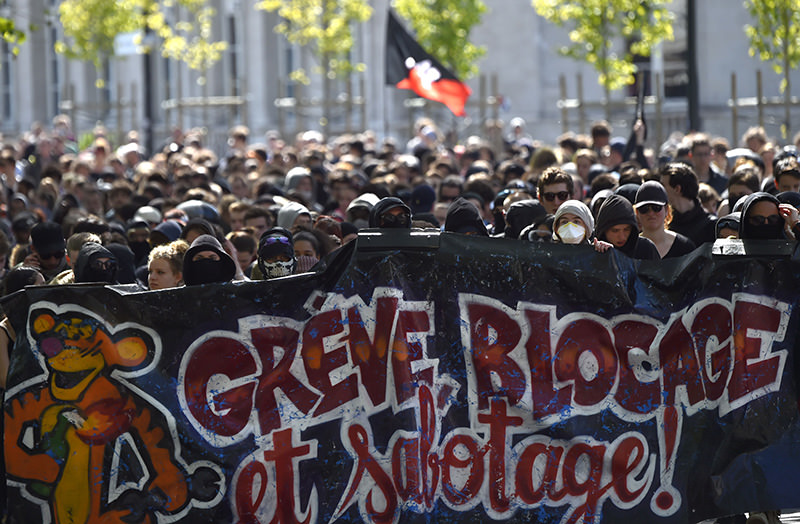 People hold a banner reading ,Strike, blockade and sabotage, as they march during a protest against the government's planned labour law reforms in Nantes, western France, on May 3, 2016. (AFP Photo)
by May 10, 2016 12:00 am

France's Socialist government planned Tuesday to bypass parliament to ram through a labour reform bill that has brought hundreds of thousands of protesters to the streets.

The reform, which would make it easier for employers to hire and fire workers, is viewed as the last major piece of legislation for President Francois Hollande as the clock ticks down on his term in office.

But Hollande, the least popular leader in modern French history, has faced fierce and vocal opposition from within the ranks of his own party, making passage through parliament unlikely.

An extraordinary cabinet meeting was convened on Tuesday to invoke the constitution's controversial Article 49.3, allowing the government to bypass parliament.

The tactic to legislate by decree has been used only once before under Hollande -- to force through another controversial economic reform governing trading hours and the deregulation of some sectors.

"This is really an authoritarian government," said Jean-Claude Mailly, head of the Force Ouvriere trade union. "If it was really a bill for social progress... the majority (vote) would be found."

Unions and student groups have led waves of protests across France since early March against the proposed reform.

Pressure from the street -- as well as parliament's back benches -- caused the government to water down the proposals, only to anger bosses while failing to assuage workers.

The government says the new labour reform is designed to unlock France's rigid job market and cut stubbornly high unemployment of around 10 percent -- a pledge on which Hollande has staked his presidency.

Unions fear the reform will erode the cherished rights of workers who are on full-time contracts, while student organisations believe it will fail to create secure jobs for young people.

Joblessness is nearer to 25 percent among the young, with many stuck in an endless cycle of short-term contracts and internships.

The constitutional tactic carries the risk of a no-confidence vote in parliament, which has already been threatened by the right-wing opposition and by far-left MPs and dissident Socialist deputies.

But the two sides oppose the law for different reasons, and a joint effort is seen as unlikely.

Even without a no-confidence vote, use of the heavy-handed constitutional manoeuvre to ram through the law will likely further lower Hollande's standing among left-wing voters.

The 61-year-old Hollande is facing a re-election bid next April with the lowest poll numbers of any recent president. His approval rating currently stands at 13 percent.