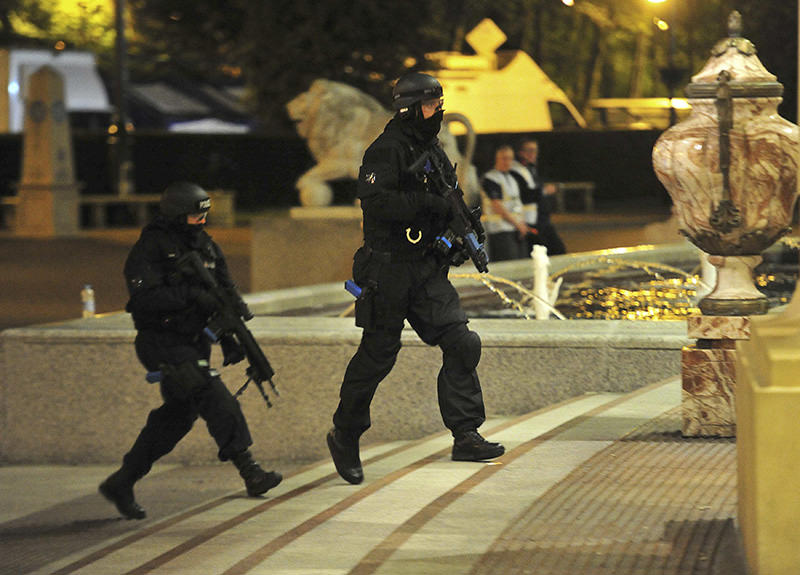 Armed officers take part in a police drill simulating an armed attack on the Intu Trafford Centre shopping centre in Trafford, Manchester, Britain, May 10, 2016 (Reuters Photo)
by Anadolu Agency May 10, 2016 12:00 am

Police in Manchester have apologized for making a mock suicide bomber shout "Allahu Akbar" during a counter-terrorism exercise in the northern English city.

Police, ambulance crews and special forces were involved in the drill, which took place in the early hours of Tuesday morning at the Trafford Centre, Manchester's largest shopping mall.

The simulation, which was staged to test the authorities' response to a genuine attack, began with a man dressed in black walking into the building shouting "Allahu Akbar!", Arabic for "God is Great!".

But the Community Safety Forum, a group that combats Islamophobia in the U.K., criticized the choice of words, tweeting: "This is offensive. There are many ways to make a situation 'real'. Such actions only increase hate crime."

The group added: "This sort of thing panders to stereotypes and further divides us. It will increase anti-Muslim hate crime."

By Tuesday afternoon, Manchester police issued an apology, saying it acknowledged it was "unacceptable to use this religious phrase immediately before the mock suicide bombing, which so vocally linked this exercise with Islam.

"We recognize and apologize for the offence that this has caused," the written statement added.