Handle of Russian military vehicle comes off during Putin's inspection 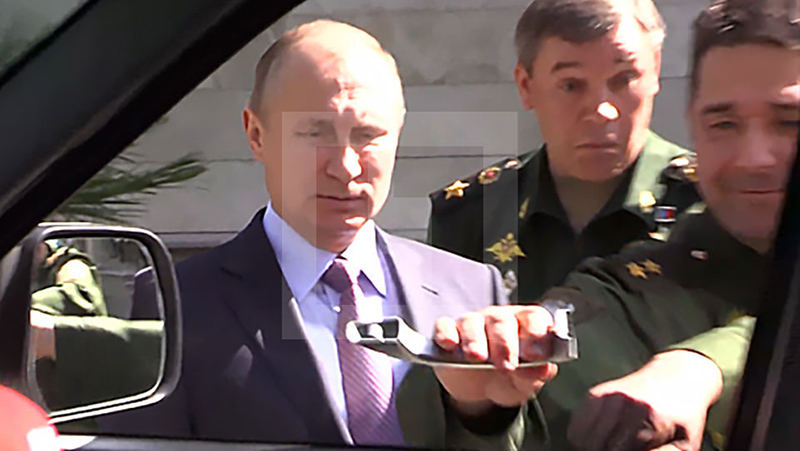 | Photo: Life News
by May 13, 2016 12:00 am
An effort to show off the superiority of Russian military equipment backfired on Thursday when the door handle of a jeep fell off just as President Vladimir Putin was inspecting the vehicle.

The Kremlin leader was being shown an array of military vehicles parked outside his residence in the southern resort of Sochi, including a Russian-made UAZ Patriot pick-up truck equipped with heavy machine guns.

When Putin tried to open the front passenger-side door, it would not budge, according to a Reuters reporter at the event.

Lieutenant-general Alexander Shevchenko, part of the military delegation showing off the equipment, came to Putin's aid, but when he grabbed the door handle, it came away in his hand.

Putin let out a chuckle as Shevchenko hurriedly dropped the handle into the pick-up through an open window. The Russian leader then moved on to inspect some other vehicles, but did not attempt to get inside any of them.

A video of the incident was posted on Russian news site Life News.

The incident will revive uncomfortable memories of the kind of shoddy workmanship which long dogged the reputation of Russia's auto industry.

Manufacturers say their vehicles are now much better, but for years buyers of new Russian cars would routinely face lumpy paintwork, engines that would not start and cheaply-built interiors that fell apart.

Putin himself has been left red-faced before while attempting to promote the Russian auto industry.

In 2011, he climbed into a new Lada Granta saloon car and failed to start the engine at least five times. Reporters at the event also said he needed help from car-making executives to open the car's boot.

The sector had been riding high after the Kremlin's military campaign in Syria showed off the capability of Russian weapons to potential buyers around the world.