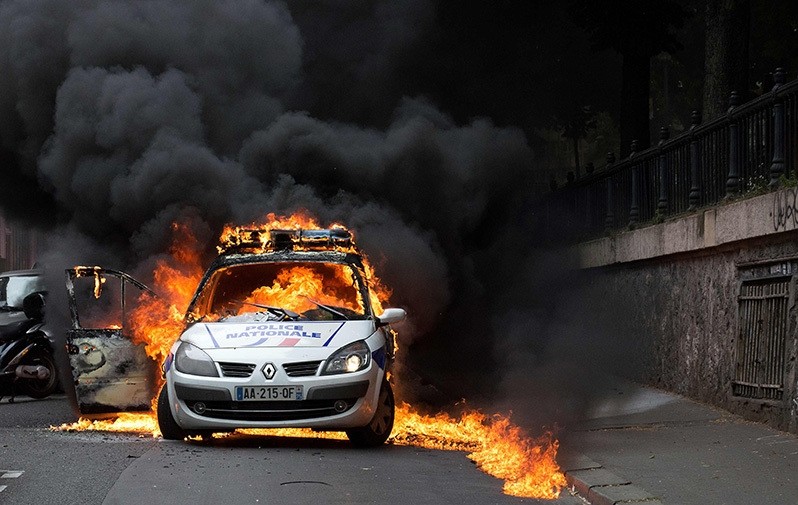 A police car burns after being set on fire during an unauthorized counter-demonstration against police violence on May 18, 2016 in Paris. (AFP Photo)
by May 18, 2016 12:00 am

Police on Wednesday staged demonstrations across France against a surge of "anti-cop hatred" which they say they have suffered at a series of anti-government protests in recent months.

But the demonstrations sparked a violent counter-protest in Paris, where a police car was attacked and set alight as some 300 protesters defied a ban to march through the streets chanting "Cops, pigs, killers!" 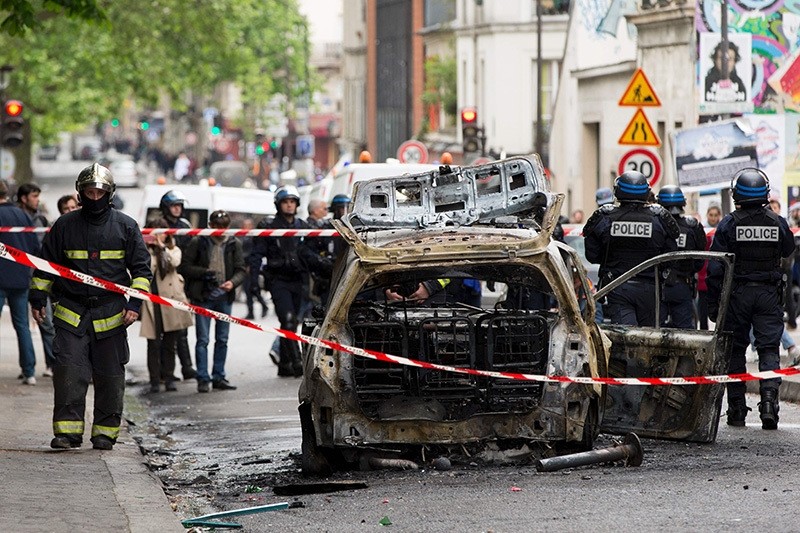 Protesters attacked the car with iron bars, forcing the two officers inside to leave the vehicle, before hurling a petrol bomb into it, an AFP journalist reported.

But relations have frayed following months of near-weekly anti-government protests, which have increasingly strained police resources at a time of an unprecedented security threat, and the security forces have also come under fire for using undue force.

Alexandre Langlois, head of the police section of the CGT union, said the police's reputation had been "smeared" and that police officers had become "scapegoats for social anger".

The Paris rally took place in Place de la Republique, the focal point for the youth-driven "Up All Night" movement that emerged out of the protests against the Socialist government's controversial labor reforms.

Officials said they had banned the counter-demonstration on concerns it would "only fuel tensions and seriously threaten public order".

Other police rallies were to take place later in the day in some 60 towns and cities around the country.

Police have been overstretched while trying to secure the wave of protests while facing a heightened terror threat.

The state of emergency, which was imposed after the November terror attacks that killed 130 people, has also placed extra demands on the police.

President Francois Hollande sent a "clear message of support to all police forces during a difficult time," his spokesman said, adding: "A balance must be perfectly preserved between maintaining order and respecting our rights."

Prime Minister Manuel Valls for his part tweeted that to attack police "is to attack all of us".

Security was exceptionally tight for the Paris demonstration, with some 400 police manning barriers around the square while a few hundred attended the rally.

A five-minute video showed clips of past demonstrations where protesters hurled petrol bombs, chunks of concrete and bottles at police.

Over the past two months, some 350 members of the security forces have been injured during protests against the proposed labor reforms, which were eventually forced through the lower house of parliament last week without a vote.

A plainclothes officer was seriously injured after being hit in the head by a projectile at a Paris protest last month.

"You can see why these security forces are a bit exasperated," national police chief Jean-Marc Falcone said Wednesday.

Anti-government protests led by unions and student groups have often turned violent, notably when small groups of hooded youths -- known as "casseurs" -- have joined in, apparently well organized and determined to clash with police.

Fuelling anti-police sentiment was a video that emerged in late March showing two officers holding up a 15-year-old boy while another violently punched him.

The clip, which was widely shared on social media, was followed in mid-April by a poster printed by a section of the CGT union which read: "Police should protect citizens, not hit them -- stop the violence".

Around 30 investigations have been opened into alleged police brutality, and leftwing politicians as well as unions have strongly criticized the government for its handling of the protests.

Despite the tensions, the French police still scored an enviable 82-percent approval rating in a recent opinion poll.

The police have called on the government to respond firmly to the hooded "casseurs" -- literally breakers, or troublemakers -- at protests.

"I've never seen this before," a riot policeman told AFP.

"The casseurs... are perfectly organized... to hurt cops."

On Saturday, a high school student was charged with assaulting a policeman during a protest earlier this month in the western city of Nantes.