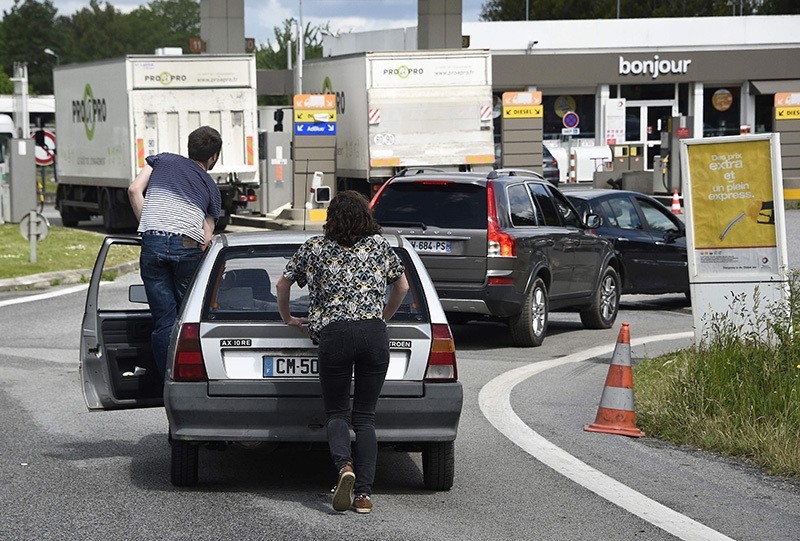 People push their car to save oil before refueling at a gas station following the blockades of oil depot (AFP photo)
by Compiled from Wire Services May 23, 2016 12:00 am

Gas shortages caused long lines of motorists in parts of France on Monday, as protesters angry over government labor reforms blockaded some of the country's oil refineries and fuel depots.

The action was the latest in three months of strikes and protests against a draft law that has set the socialist government against some of its traditional supporters and sometimes descended into violence.

France's finance minister has slammed strikers' actions as illegitimate after union-led blockades over labor reforms led to full or partial shortages at more than 1,500 gas stations out of some 12,000 across the country.

The northwest of the country was worst hit over the weekend. As deliveries dwindled, drivers were forced to seek out gas stations that had not run out of fuel. But authorities said the situation was exacerbated by some motorists rushing to stock up because they feared supplies were about to run out.

Local authorities in some regions imposed rationing to eke out the supplies and police moved in to access some refineries and fuel depots blockaded over the weekend.

Six out of eight refineries were either at a standstill or in the process of being shut down, a spokesman for the umbrella CGT union told France Info radio. "The blockade is a consequence of stubbornness of the government," Emmanuel Lepine, in charge of CGT's gas division, said. He added that the people who ran the refineries operated like boat crews – when half the team refuses to work, the whole operation shuts down.

Another CGT official, Eric Sellini, said activists had blockaded 189 fuel depots for several days, although police had since cleared protesters from some of them. He was unable to say how many were still blocked. To add to the disruption, lines were building up at the stations still open, slowing traffic on the surrounding roads.

In the cities of Nantes, Rennes and Brest in the northwest, motorists were waiting up to an hour to get to the pumps. In the southeast, union activists blocked a road leading to the Fos-sur-Mer refinery with burning tires. And in Donges, near Nantes on the northwest coast, union activists used wooden pallets and burning tires to block access to a fuel depot there. But France's government has made it clear it will stand by the controversial labor reforms.

Speaking during a visit to Israel on Sunday, Prime Minister Manuel Valls condemned the blockade of the fuel depots and said the authorities would keep working to lift them. "I'm asking everyone to face up to reality, not to put the country's economy in difficulty and to respect the users," Valls told BFMTV. He was defiant about the labor market reforms.

"The labor law will go to the end of its parliamentary passage," he told BFMTV.

Finance Minister Michel Sapin denounced the attitude of the CGT union. It was perfectly acceptable to protest against a proposed law or to make political demands, he said, "but there is a certain point ... at which the action becomes illegitimate," he told iTELE.

The government says the changes contained in the draft labor law will make France's notoriously rigid labor market more flexible and create jobs. The government forced the bill through the lower house of parliament earlier this month without a vote.

Opponents say the reforms will erode job security and do little to bring down the unemployment rate, stuck at 10 percent, and nearly 25 percent for young people.

The proposed law has led to months of strikes, protest marches and demonstrations. Last week, train engineers and air traffic controllers walked off the job, causing cancelations across the country. Many of the rallies and demonstrations have ended in confrontation between masked youths and riot police.

Over the past two months, some 350 members of the security forces have been injured during demonstrations. Much of the unrest has been blamed on small groups of troublemakers who appear bent on targeting security services.