Clashes continue to haunt France amid fresh wave of strikes 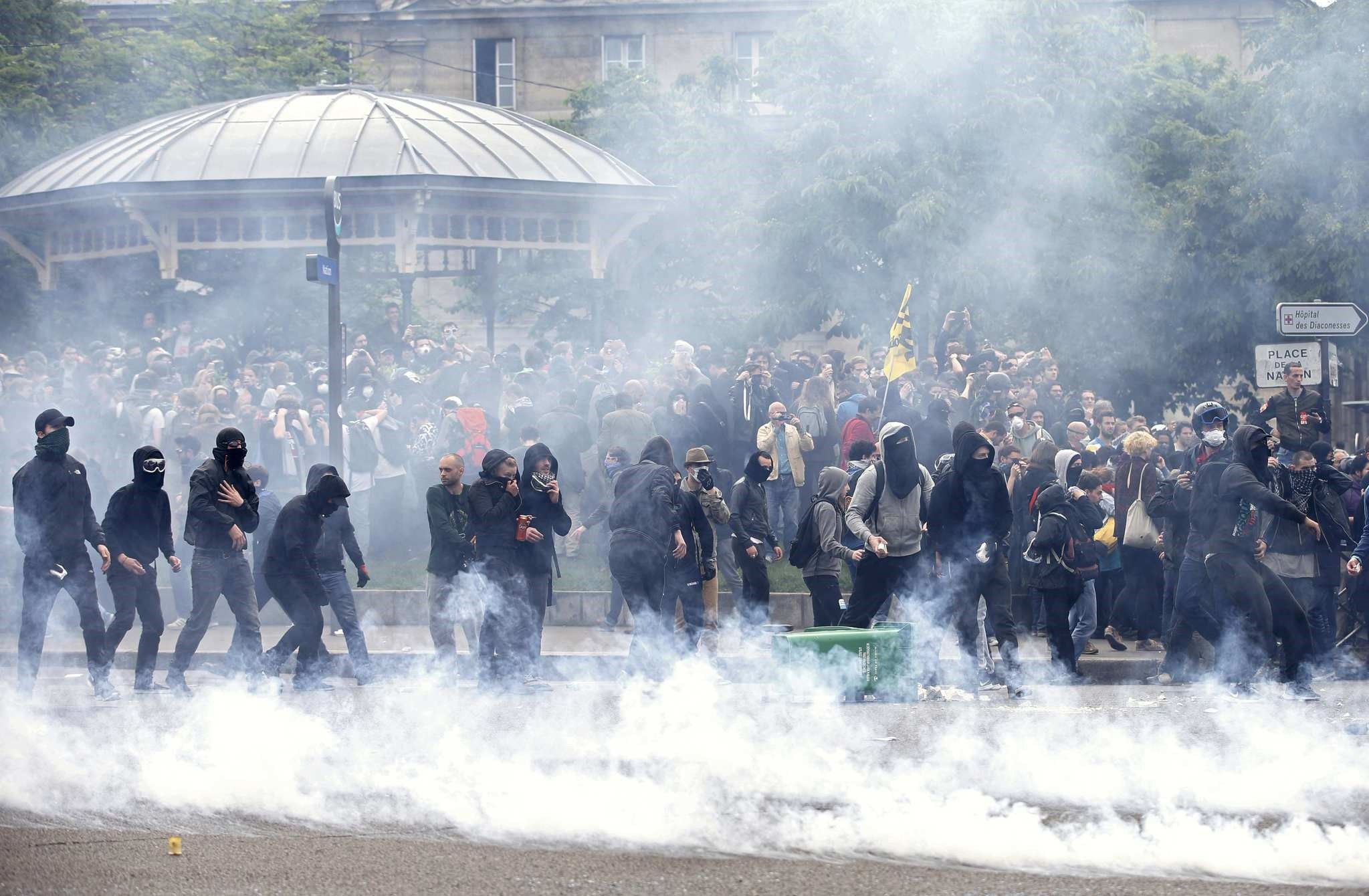 Tear gas fills the air during clashes with French gendarmes during a demonstration in protest of the government's proposed labor law reforms in Paris, France, May 26, 2016. (Reuters Photo)
by May 26, 2016 12:00 am

Masked youths clashed with police in Paris and striking workers blockaded refineries and nuclear power stations on Thursday as an escalating wave of industrial action against labour reforms rocked France.

Police fired tear gas at around 100 protesters who broke away from a march through the capital to smash windows of shops and parked cars, an AFP reporter said, in the latest outburst of anger at the controversial legislation.

Unions called for rolling strikes on the Paris Metro to start on the day of the opening match on June 10.

Although some blockades on fuel depots and refineries in the north of the country were called off, many motorists were still stuck in long queues at petrol stations around France.

A man in his 50s had to be airlifted to hospital after a motorist rammed a roadblock set up by activists outside a petrol refinery at Fos-sur-Mer on the Mediterranean coast.

At the Tricastin nuclear plant in southern France, workers set fire to piles of tyres, sending out clouds of black smoke.

Unions are furious about the legislation forced through parliament by the deeply unpopular Socialist government which aims to reform France's famously rigid labour laws by making it easier for companies to hire and fire workers.

Under intense pressure, Prime Minister Manuel Valls insisted that the law would not be withdrawn, but said it might still be possible to make "changes" or "improvements".

But there were signs that some in the ruling Socialist Party were buckling, with Finance Minister Michel Sapin suggesting the most contested part of the legislation should be rewritten.

Valls slapped Sapin down and ruled out revamping the clause, which gives individual companies more of a free hand in setting working conditions.

"You cannot blockade a country, you cannot attack the economic interests of France in this way," a defiant Valls told parliament, after earlier branding the CGT union that is driving the protests as "irresponsible".

The mounting problems for the government come 12 months ahead of an election in which President Francois Hollande is considering standing again but he is languishing in opinion polls.

The CGT said all but three of France's 19 nuclear power stations -- which provide three-quarters of its electricity -- have voted to stop work.

RTE, the body overseeing the national power network, said the stoppages were not having an immediate effect on the electricity supply, but "if it worsens, it will have an impact on the management of the network".

A third of petrol stations were dry or dangerously low on fuel after several days of blockades at refineries by union activists.

One refinery returned to operation after the activists ended their strike, but five of the country's eight refineries were still either halted or operating at reduced capacity.

'I blame the government'

Pierre Jata, a 40-year-old cable TV technician was rushing to fill up at a petrol station on the edge of the capital, minutes before supplies ran out.

He laid the blame for the disruption on the government.

The government has been forced to tap into its strategic reserves and Hollande has vowed to do "everything... to ensure the French people and the economy is supplied".

Meanwhile, strikes forced Orly airport in Paris to ground 15 percent of flights and the commuter and national train networks were hit, with one in five high-speed trains cancelled.

The CGT has called for another day of action on June 14, raising concerns for fans travelling to Euro 2016 matches being held at 10 venues around France.

Many organisations, including the International Monetary Fund, have said the labour legislation is necessary to create jobs.

But unions are demanding the reforms be scrapped altogether, arguing they are too pro-business and unlikely to bring down high unemployment.

The government forced the controversial legislation through parliament earlier this month without a vote, further infuriating opponents.

Unions say they have popular support for the protests and they were cheered by a poll carried out on Thursday that showed nearly two-thirds of people believe the action is "justified".

"France is obviously not unreformable," Schaeuble told journalists. "France can live with such disputes."