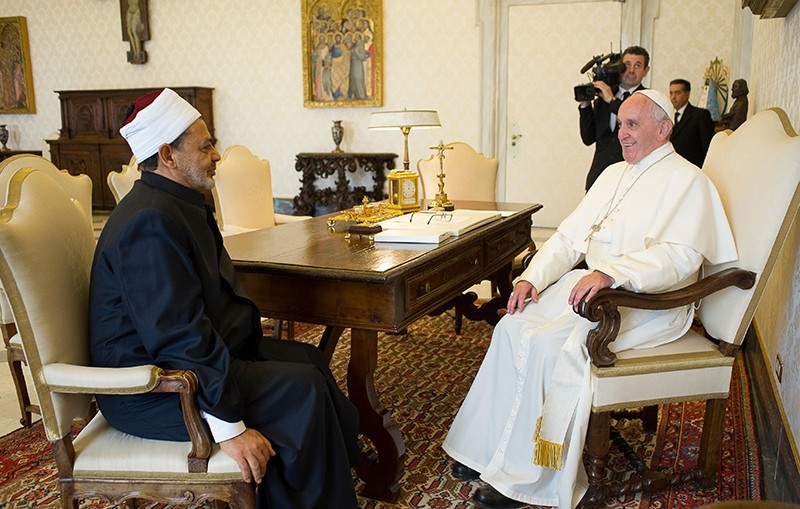 This handout picture taken and released by the Vatican press office on May 23, 2016 shows Pope Francis (L) talking to Egyptian Grand Imam of al-Azhar Mosque Sheikh Ahmed Mohamed al-Tayeb (R) (AFP Photo)
by Compiled from Wire Services May 26, 2016 12:00 am
Pope Francis met on Monday the grand imam of Egypt's highest Islamic authority, Al-Azhar, looking to heal Vatican relations with the influential centre of Sunni Muslim learning in a sign that a five-year suspension of important Catholic-Muslim ties was over.

The 1,000-year-old mosque and university centre cut contacts with the Vatican in 2011 over what it said were repeated insults towards Islam from Francis's predecessor, Pope Benedict.

The decision came just days after Benedict denounced what he called "a strategy of violence that has Christians as a target" following a bomb attack outside a church in the Egyptian city of Alexandria that killed 23 people.

Since his election in 2013, Francis has put great emphasis on improving inter-faith relations and smiled warmly as he greeted Egypt's top cleric, Ahmed al-Tayeb.

"The message is the meeting," the pope told reporters.

In a subsequent statement, the Vatican said the two men had discussed the problems of violence and terrorism, and the situation of Christians in the Middle East, including how best to protect them.

Pope Francis last year urged an end to what he called a genocide against Christians in the Middle East, but he has also said it is wrong to equate Islam with violence.

In an interview last week, he said "the idea of conquest is inherent to the soul of Islam" but added that Christianity had the same missionary goal in its "Great Commission" where Jesus told his apostles to "go and make disciples of all nations".

Looking to set an example for Europe, Francis has taken in Muslim refugees fleeing the war in Syria. Last week he criticised Western powers for trying to export their own brand of democracy to the Middle East and Africa without respecting indigenous political cultures.

Christians, mostly Orthodox Copts, account for about 10 percent of Egypt's population, which is overwhelmingly Sunni Muslim.

The Al-Azhar university has some 450,000 students, many from countries across Asia and Africa. It also has a network of more than 9,000 schools across Egypt attended by more than 2 million students.
Last Update: May 26, 2016 11:35 am
RELATED TOPICS