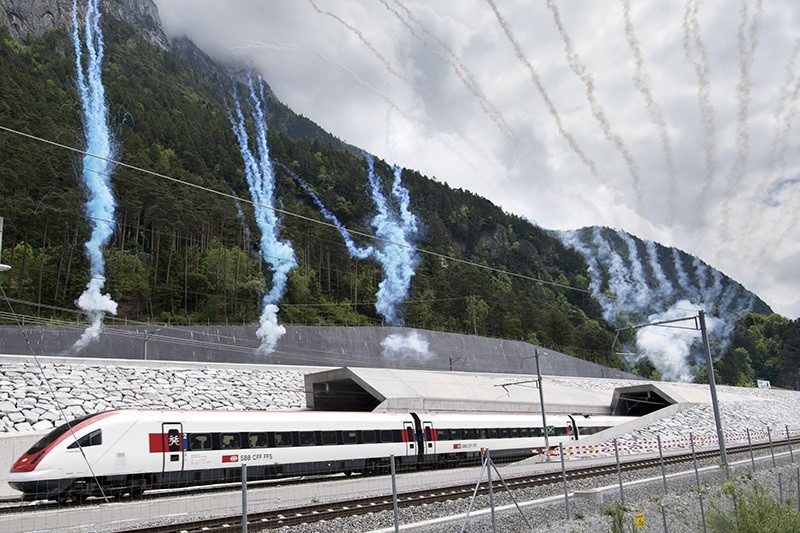 The first train comes out of the tunnel's North portal on the opening day of the Gotthard rail tunnel, at the North portal near Erstfeld, Switzerland, Wednesday, June 1, 2016. (AP Photo)
by Jun 01, 2016 12:00 am

The world's longest tunnel officially opened on Wednesday, with the trailblazing rail passage under the Swiss Alps aiming to ease transit through the heart of Europe.

With political unity on the continent shaken by a massive influx of migrants and the looming threat of Britain's EU departure, Swiss president Johan Schneider-Amman said the tunnel would "join the people and the economies" of Europe.

He spoke before the 57-kilometre (35-mile) Gotthard Base Tunnel (GBT) made its ceremonial first run with European leaders on board. 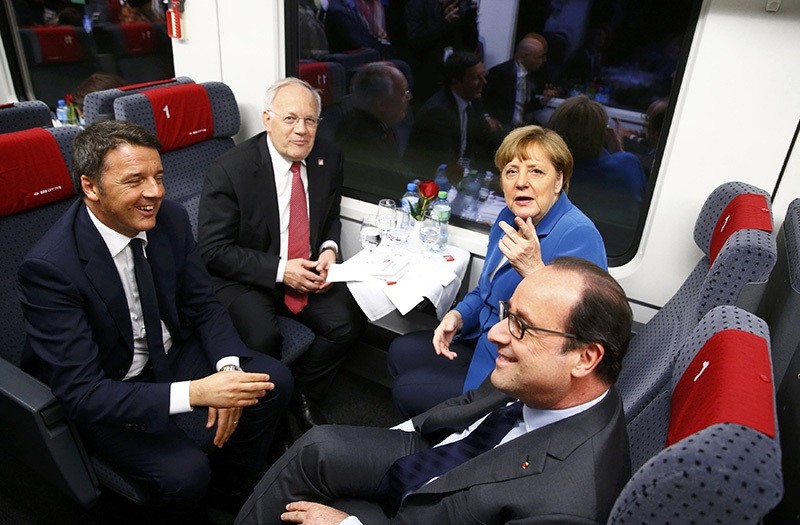 While the tunnel was entirely funded by non-EU member Switzerland, the bloc's transport commissioner Violeta Bulc has hailed it as "a godsend" for the continent.

It runs from Erstfeld in the central canton of Uri, to Bodio in the southern Ticino canton.

Travel through the Alpine region, by rail or by road, requires taking a zigzag and undulating route.

The Gotthard Base Tunnel was designed to offer a better option for both private travelers and commercial freights. 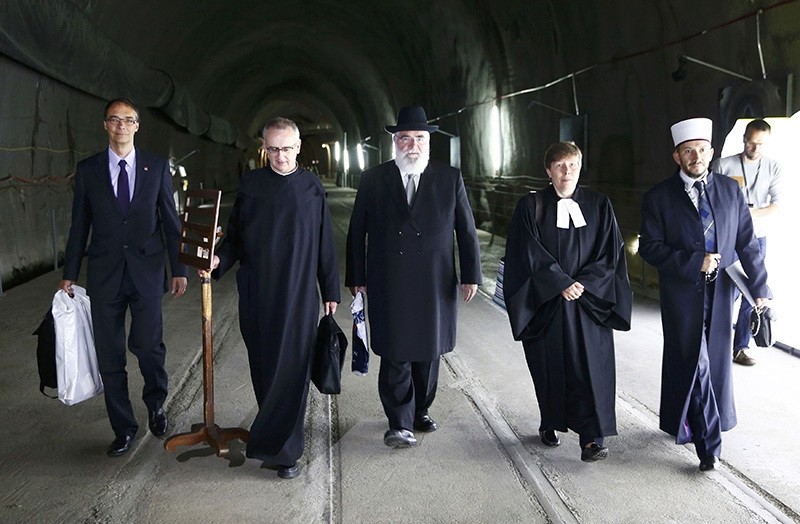 When the full service opens in December, the tunnel will shave the train journey from Zurich to Milan in northern Italy down to two hours and 40 minutes, roughly an hour less than it currently takes.

It should also make rail freight more efficient -- partly by supporting heavier cargo, which should reduce the number of smoke-spewing lorries on the roads, in turn improving traffic and curbing pollution.

The number of daily rail passengers is expected to increase from the current rate of 9,000 people to 15,000 by 2020, according to the Swiss federal railway service.

The rough design for a rail tunnel under the Gotthard Pass was first sketched by Swiss engineer Carl Eduard Gruner in 1947.

But bureaucratic delays, concerns over the cost and other hurdles pushed back the start of construction until 1999. 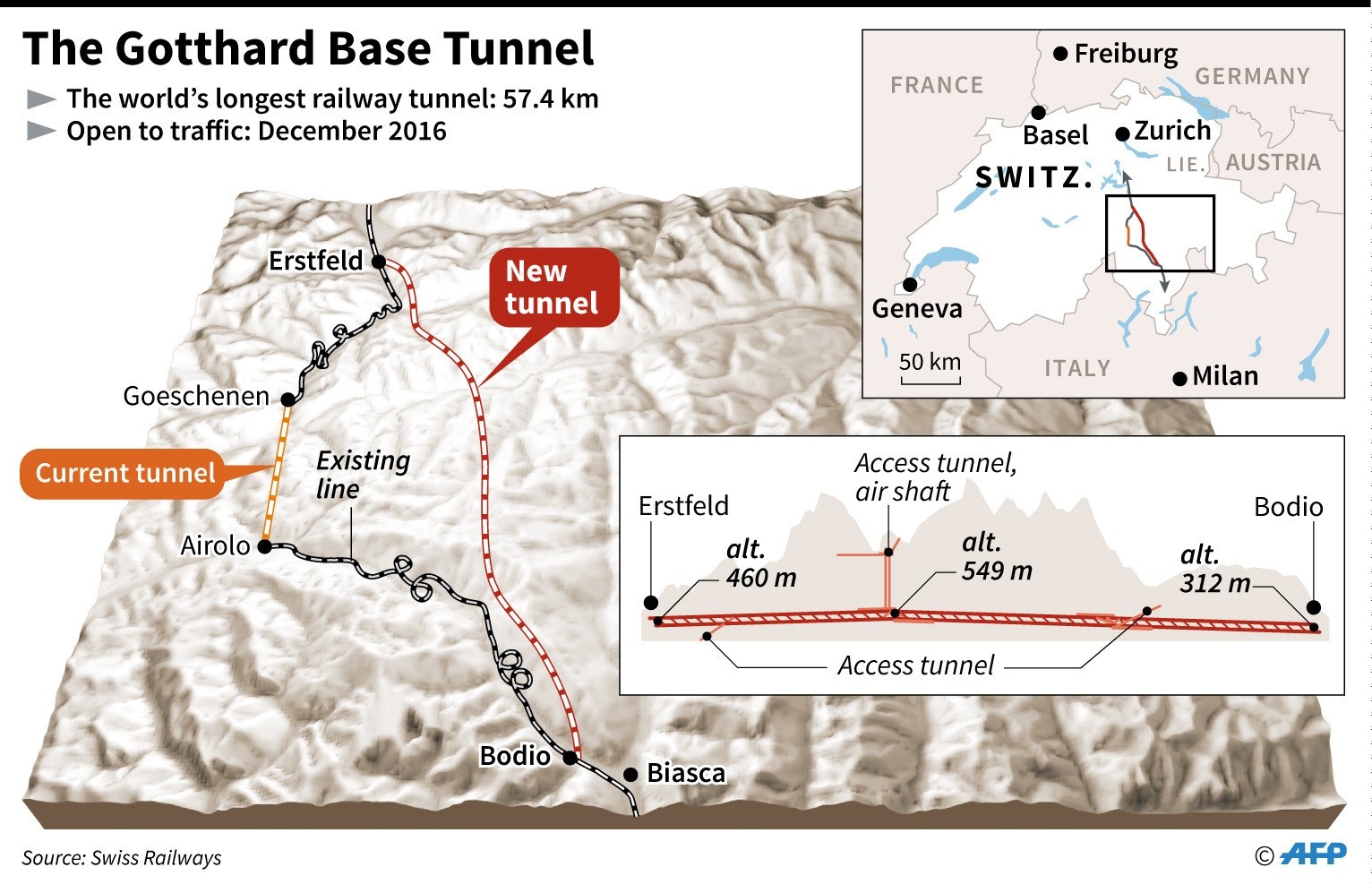 According to the Swiss rail service, it also took 43,800 hours of non-stop work by 125 laborers rotating in three shifts to lay the tunnel's slab track.

The ambitious venture was largely made possible by technical advances in tunnel-boring machines, which replaced the costly and dangerous blast-and-drill method.

The primary machine used to make the Gotthard tunnel was roughly 410-metres long and functioned like a mobile factory.

It cuts through rock and throws the debris backwards while simultaneously placing the pre-formed segments of concrete that form the shape of the tunnel.

A separate system grouts the pieces together.

With its official opening, the GBT has surpassed Japan's 53.9-kilometre Seikan tunnel as the world's longest train tunnel.

The 50.5-kilometre Channel Tunnel that links England and France has been bumped into third place.