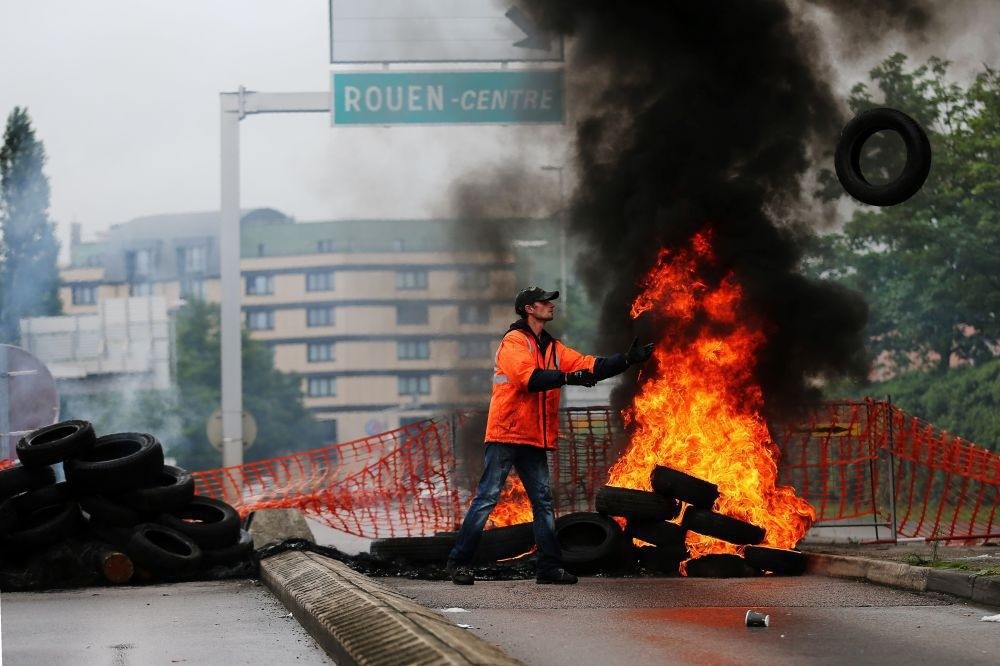 A union member throws a tire onto a pile set ablaze at a blockade onto a main road leading to downtown Rouen, northwestern France, May 31.
by Daily Sabah with Wires Jun 01, 2016 12:00 am

As France continues to struggle with nationwide strikes just 11 days before the Euro 2016, public sector employees in Belgium also started strikes across the country, leading to a disruption in transportation and other public services

The socialist CGSP union urged public service workers to stop work for 24 hours from Tuesday to protest the center-right government's austerity plans, including raising the retirement age. Pickets will disrupt city train, bus and tram services as well as schools and government offices, CGSP spokesman Pierre Vermeire told AFP. Air traffic controllers and workers at the northern port city of Antwerp will also strike, he added. Inter-city rail workers on strike since last week and prison staff who stopped work five weeks ago meanwhile vowed to continue their walkout in Brussels and the southern French-speaking region of Wallonia. 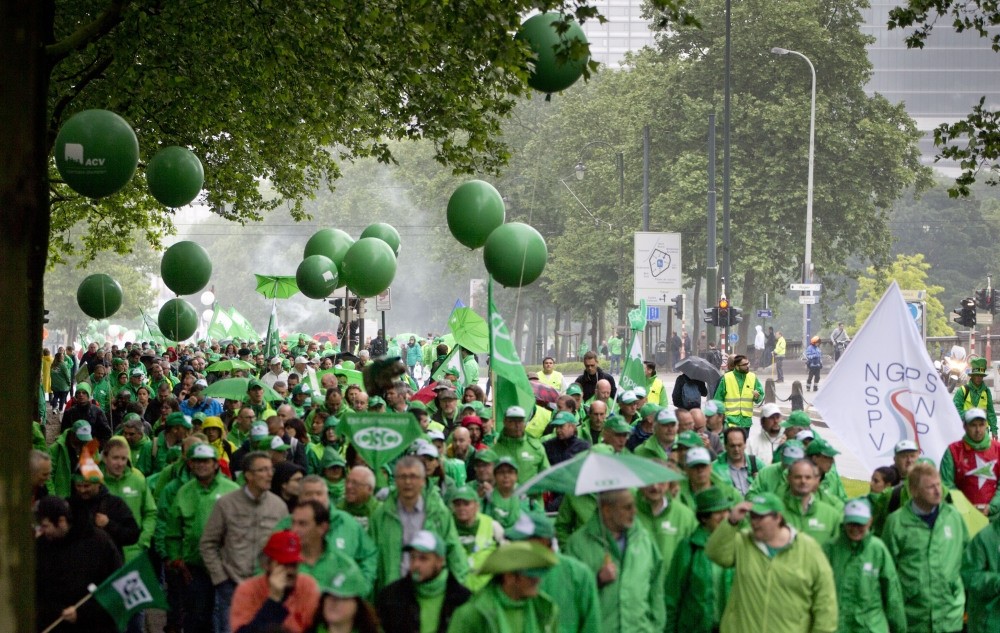 Nearly 95 percent of prison staff in those regions on Monday rejected as insufficient a proposal made last week by Justice Minister Koen Geens to increase personnel, the GCSP said. The CGSP and the Christian SSC/ACV union on Monday meanwhile rejected offers from the state-run SNCB railway firm aimed at ending a strike launched May 25 over reductions to overtime compensation.

Growing worker discontent in Belgium comes amid mounting unrest in neighboring France over contentious labor reforms. After attempting to paralyze France with blockades of refineries and fuel depots last week, the hardline CGT union has responded by calling for strikes on the national rail network beginning Tuesday and on the Paris Metro from Thursday. Air travelers are also set to face more cancellations and delays.

Meanwhile, France's government, seeking to avert public transport paralysis when a European soccer tournament kicks off next week, urged the powerful CGT trade union yesterday to negotiate a way out of a confrontation over planned labor law reforms.

The transport strike adds to problems still being caused by last week's blockade of fuel depots which left motorists queuing at many petrol stations. The rolling train strike called by the powerful CGT union is expected to affect around half of national and regional train services.

That will be followed by a strike on the Paris Metro network from Thursday and Air France pilots have voted yesterday in principle for a lengthy strike at some point in June, when Euro 2016 is in full swing.

Six of France's eight oil refineries were still halted or running at reduced capacity due to union action. Workers at the oil terminal in the northern port of Le Havre - which supplies kerosene to Paris's two main airports - voted Monday to extend their blockade until Wednesday.

The protests and strikes have cast a shadow over the European football championships, which are expected to attract millions of foreign visitors to France when the tournament kicks off on June 10.

Tourism bosses have warned on Monday that with threats of nation-wide violent protests and strikes which are disrupting transportation, the number of tourists visiting Paris is decreasing ahead of the Euro 2016 championship. France is the world's most visited country, but tourists were frightened by the November attacks in the capital that left 130 people dead, and last year's January 2015 killings at the Charlie Hebdo magazine and a Jewish supermarket. While the atmosphere in Paris had returned to normal in recent months, an outburst of social unrest over controversial labor reforms has once again put doubts in the minds of tourists.

While President Francois Hollande reiterated his refusal to withdraw a labor reform that would make hiring and firing easier, the ministers said they hoped to defuse the conflict if CGT chief Philippe Martinez showed willing.

"We've been hearing in the last few hours that Mr Martinez is saying 'Let's talk'," Labour Minister Myriam El Khomri told RTL radio. "I am waiting for proposals from the CGT."

Some 90,000 police and security teams are being mobilized to keep fans safe during a month-long soccer fiesta. The country is still under emergency rules following the attacks in which extremist militants killed 130 people in Paris last November.

Amid protests and strikes, many videos showing police and security forces apparently using disproportionate force on labor protesters have attracted viewers and controversy, including a police officer aggressively shoving a woman and throwing her to the ground.