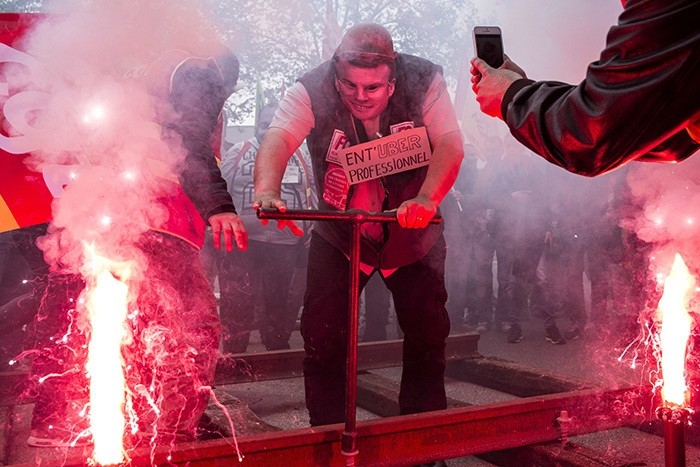 France suffered a third day of rail strikes with unions at nuclear plants and the national rail service protesting the proposed labor law. Meanwhile, air traffic controllers called off a walkout after reaching a deal on work conditions with the government

Workers were on strike yesterday at most French nuclear plants and the national rail service to protest the proposed labor bill. Members of the CGT union at 16 of France's 19 nuclear plants, which provide the majority of the country's electricity, voted for a one-day strike yesterday. Nuclear plants are required to maintain a minimal level of production even during strikes for security reasons, though some power outages are expected.

Service on high-speed TGV trains and commuter trains was disrupted yesterday for a second day. Some Paris public transport workers also joined the strike, though disruptions were minimal. CGT-led stoppages were also disrupting refineries and nuclear power plants but the union looked increasingly isolated in its efforts to force the Socialist Party government to withdraw a labor law reform that would make hiring and firing easier. Six out of 10 high-speed TGV train connections were operating and other inter-city links were cut to a third of normal, said the state-owned SNCF railway company, a stronghold of the CGT union, which is one of France's two largest unions. But a smaller union was expected to call off its participation in the strike after securing government assurances of help with the SNCF's 50 billion euro debt.

Meanwhile, air traffic controllers called off a walkout that had been expected to ground flights over the weekend after reaching a deal on work conditions with the government. French President Francois Hollande has rejected CGT demands that he scrap a bill that the union says will undermine labor protection by giving companies more scope to negotiate in-house deals on pay and conditions. His government, which insists the reform is needed to help combat a jobless rate of 10 percent, has been working flat out to defuse sectoral tensions and prevent various grievances coalescing into one big national protest.

A French Public Opinion Institute (IFOP) poll for Le Figaro magazine suggested public sympathy for the strike is ebbing, with 60 percent saying the CGT was abusing the right to strike and trying to blockade the country illegally, while 40 percent think the opposite. Previous polls had shown the strike had majority support.

Earlier this week the government announced pay rises for state-employed teachers and pledged to restore scrapped public spending for research. It also intervened to force SNCF management go some way toward meeting union demands that rest-time be protected in a reorganization under negotiation ahead of a Europe-wide opening of passenger rail services to private competition from 2020. With presidential and legislative elections a year away, the concessions to teachers could help repair damaged relations with a sector generally sympathetic to the ruling Socialists. The more immediate concern is to avert serious disruption during the Euro 2016 cup, when some 2.5 million people are expected to attend dozens of matches across the country, with 1.5 million fans expected to come from outside France.

Labour Minister Myriam El Khomri urged the CGT, which has threatened to cut power supplies to the headquarters of the Medef employers' federation, to play a more constructive role. "I urge them to show some form of economic patriotism. Just when the economy is picking up, we shouldn't weaken it," she said in an interview on i>TELE news television channel. More demonstrations against the reforms – which the government says are designed to make France more business-friendly – took place in major cities on Thursday and workers were back on strike at 16 of the country's 19 nuclear power stations. The country was dotted with union blockades.

Activists briefly prevented trains from leaving from the Gare de Lyon, one of Paris' main rail stations, when they occupied the signal box. They were removed, but trains to southern France still suffered long delays as a result. Other protests were held outside a Renault factory in Rouen and a major naval shipyard in Saint-Nazaire, while police clashed with protesters blocking a ring road in the southwest city of Toulouse. The unions still have plenty of opportunities to cause headaches for the government during the football championships, which also pose a major security challenge in the wake of last year's extremist attacks in Paris.

The French government says its new labor law is aimed at reducing stubbornly high unemployment and making the struggling economy more business-friendly. But unions are furious the government rammed the reforms through the lower house of parliament without a vote, and have called for another national day of strikes in two weeks when the bill goes before the French senate. Amid protests and strikes, many videos showing police and security forces apparently using disproportionate force on protesters have attracted viewers and controversy, including a police officer aggressively shoving a woman and throwing her to the ground.