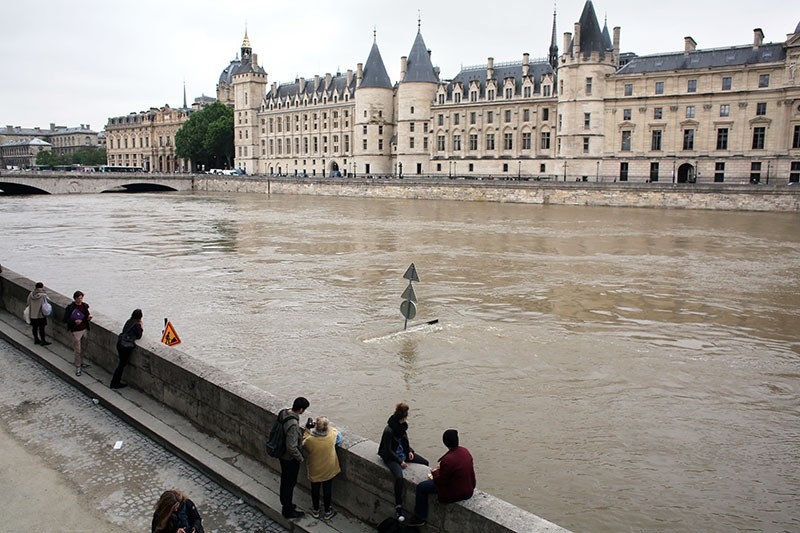 Paris' Louvre and Orsay museums shut on Friday to remove art treasures from their basements as the swollen River Seine neared its highest level in three decades.

At least 16 people have been killed in floods that have wrought havoc in parts of Europe after days of pounding rain, trapping people in their homes and forcing rescuers to row lifeboats down streets turned into rivers.

Parisians were urged to stay away from the Seine, which has spilled over its banks in places and on Friday rose 6.07 metres (19ft 9ins) above its normal level.

Despite the warning, a crowd gathered on the Pont du Carousel bridge by the Louvre, gawking at the Amazon-like brownish waters below.

Authorities said the river could swell to "perhaps 6.5 metres (21 feet) in a worst-case scenario", comfortably beating a level reached during floods in 1982.

The record remains the 8.68 metres reached during devastating floods in 1910.

A small number of basement flats in the capital began to flood on Friday and the environment ministry warned some residents in areas near the Seine in western Paris might have to be evacuated.

Persistently heavy rainfall across western and central Europe has swollen rivers and claimed victims from at least four countries.

Eleven people have been killed in the German states of Bavaria and Baden-Wuerttemberg, and two in Romania, while a beekeeper died in Belgium while trying to save his hives.

In France, a man on horseback drowned on Thursday after being swept away by a swollen river in Evry-Gregy-sur-Yerre, southeast of Paris.

French Environment Minister Segolene Royal said she feared more bodies would be found as waters receded in villages in central France, some of which have suffered their worst floods in a century.

Meanwhile the environment ministry said a "plateau" in flooding had probably been reached.

"This high level should likely remain relatively stable throughout the weekend before (the flooding) begins to recede," it said.

In Paris, officials erected emergency flood barriers along the Seine. Several metro stations were closed and workers piled sandbags on platform entrances to shield against any incursion.

Boat traffic has been banned in the capital, and a regional train line that runs along the Seine has been suspended.

On opposite banks of the Seine, the Louvre and Orsay museums, which see a combined total of 12.5 million visitors a year, closed their doors Friday so that artworks could be moved out of basement archives to higher floors.

The Orsay, which houses a world-renowned collection of 19th and early 20th century art, said it would remain closed until Tuesday.

The Grand Palais exhibition centre also shut Friday, as did two of the National Library's sites.

Eva Palomares, a holidaymaker from the Italian city of Milan, said she was disappointed to be unable to visit the Louvre.

But "the star today is the Seine. You have to feel its angry rumble," Palomares said.

More than 20,000 people have been evacuated in France since the weekend and around 18,000 homes are without power, the electricity distribution network Enedis said.

French President Francois Hollande said a state of "natural catastrophe" would be declared when the cabinet meets next Wednesday, a necessary step to trigger compensation payments.

Prime Minister Manuel Valls said the government would meet insurance industry representatives on Monday to ensure that flood victims would be "rapidly and efficiently" compensated for their loss.

The downpours added to a gloomy atmosphere in France a week before the country hosts the Euro 2016 football championships, with workers facing more train strikes Friday after months of protests and political turmoil.