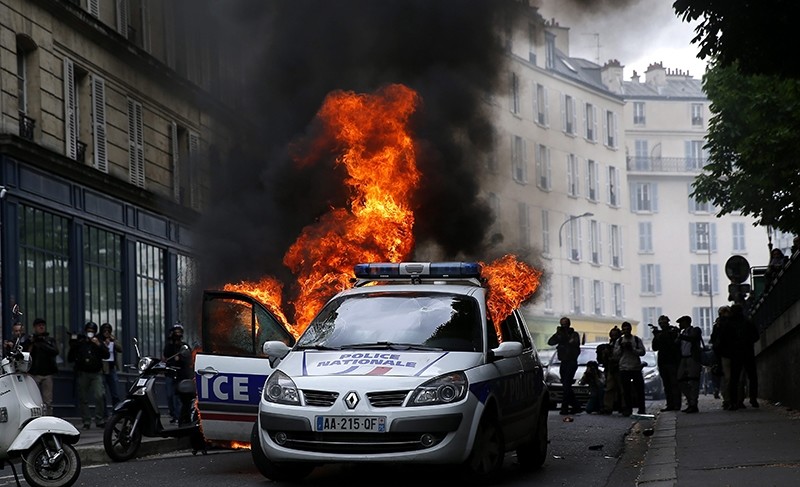 rotesters set a police car on fire during clashes as part as a demonstration, that had been banned, against police violence in the context of ongoing protests over the French government's labor law reform (EPA Photo)
by Associated Press Jun 04, 2016 12:00 am

Welcome to France — and especially its capital city.

It's been an uncomfortable time for French tourism — and officials worry that further trouble could damage the country's image just as it prepares to host Europe's leading sports event — the 2016 European Championship soccer tournament.

"I have to admit that the strikes, the rains, the attacks — they really damaged the image of France for our foreign tourist friends," says Herve Becam, vice president of France's union of hoteliers.

Becam says hotel occupancy rates were down about 25 percent in Paris but with Euro 2016 starting next Friday, the situation could still turn around. Paris is one of nine French cities hosting the tournament that captivates Europe for a month.

Others in the country's tourism sector have urged workers angry over proposed government labor changes to pull back on their repeated strikes and protests — some of which have left long lines at gas stations, fuel shortages and bridges blocked by barricades.

"There's still time to save the tourist season by putting an end to these blockages being broadcast worldwide," said Frédéric Valletoux, head of the Paris region's tourism committee.

His appeal, however, appears to have fallen on deaf ears.

On Thursday striking workers created blackouts by cutting power to a big electricity line in western France, while other protesters briefly occupied train tracks at a Paris railway hub.

More strikes are planned for the coming days, with unions and the government locked into a tug-of-war over changes to France's labor market making it easier to hire and fire workers.

A record rainfall is adding to the misery. Due to flooding along the Seine River, which winds its way through the capital, French authorities have shut down a host of the nation's landmarks: The Louvre museum, the national library, the Orsay museum and the Grand Palais, Paris' striking glass-and-steel topped exhibition center, to name a few. The Louvre is not reopening until Wednesday at the earliest.

Persistent worries are also still in play about the security situation in Paris, a city that has seen two bloody attacks by Daesh terrorists in the past 18 months. There's been speculation that the suicide bombers who blew themselves up in Brussels on March 22 initially planned to strike at the Euro championships.

The French government says some 90,000 police, soldiers, private guards and others will ensure security for the soccer tournament.

But on Friday, Interior Minister Bernard Cazeneuve admitted that the Paris police chief was demanding more security staff to protect soccer fans. Cazeneuve did not say how many more personnel Paris had asked for but said authorities "are working now on adjusting staffing to ensure maximum security."

"I cannot guarantee we will not have a confrontation with terrorists," he added.

Despite the worries and the weather, France is still among the world's very top tourist destinations. Travel insurance provider Allianz said the number of Americans booking summer vacations in Paris was virtually unchanged over last year. And a Paris taxi driver said tourism had bounced back somewhat since the Nov. 13 attacks that killed 130 people in Paris.

"The first three months (after the attacks) were really tough," said cabbie Youness Chouli, 32, as he navigated the capital's cobbled streets. "It's come back, but it's not the same as last year."

Visitors interviewed at the Trocadero, the rain-slicked esplanade with sweeping views of the Eiffel Tower, weren't put off by the threat of an attack — or by the strikes or the rain, for that matter.

Erik Leslie, 33, who was visiting Paris with his family, said he was wasting no energy worrying about another attack.

"What're the odds that that's going to happen again?" he asked, adding that if strikes became a problem "we were just going to trudge forward."

Canadian tourist Helene Gazaille, who was taking a trip to Paris to celebrate her 50th birthday, wasn't letting the weather stop her and suggested that strikes were just part of the incomparable French experience.

"We did hear there were a lot of protests but that that was typical," she said, water dripping from her disposable raincoat. "It's a ritual of the country."