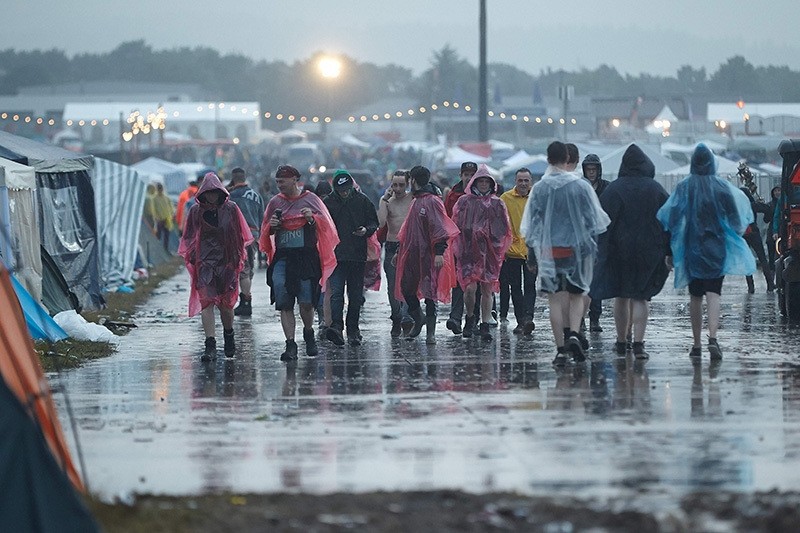 Visitors to the music festival Rock am Ring are seen during a heavy downpour in the west German city of Mendig on June 3, 2016. (AFP Photo)
by Compiled from Wire Services Jun 04, 2016 12:00 am

Organizers have suspended a rock festival in western Germany after at least 71 people were injured in a storm overnight.

Police say 71 people were hospitalized after lighting struck the Rock am Ring festival during a heavy storm. Fifteen of the victims are listed in serious condition and two were successfully revived, a police spokesman said.

Klaus-Peter Schulenberg, chairman of the Eventim company, says organizers are following orders from local authorities to put the festival on hold after more warnings of bad weather.

Schulenberg said Saturday that visitors are being urged to take shelter, but the event may resume around 8 p.m. if weather improves.

Mayen police spokesman Lars Brummer says the overall number of people hospitalized after lighting strikes at the Rock am Ring festival had increased to 71 overnight.

Brummer told the AP that "a number of those hospitalized have been discharged again." Organizers and local officials are planning to hold a news conference later Saturday to provide further information.

The festival held at a former airfield near Mendig, about 100 kilometers (62 miles) west of Frankfurt, is one of the most popular in Germany. Performers this year include Tenacious D, the Red Hot Chili Peppers and Black Sabbath. Around 90,000 people have attended the festival this year.

Germany has been hit by severe storms that have caused heavy flooding in recent days.

Last year's festival was also affected by a lightning storm, in which 33 people sustained injuries.

Elsewhere on Saturday, residents were finally allowed to return to the homes they had been evacuated from in the southwestern town of Schwaebisch Gmuend following a landslide.

Municipal authorities said a geologist had examined the affected area by helicopter and declared it safe.

Floods in other parts of Germany - which have killed at least seven people in recent days - brought out so many volunteers offering to help that traffic jams ensued.

Police in the lower Bavarian town of Simbach am Inn said they did not need any more help on Saturday, as there was nowhere left to park, and those arriving could not get to the flooded areas.

Simbach Mayor Klaus Schmid said, "They need two more hours than usual. Helpers who are en route should turn back."

One thousand volunteers had turned out to help with the Simbach flood operation on Friday, with an even higher number arriving on Saturday.

The German Weather Service issued further storm warnings for the southwest of Germany on Saturday as a result of cyclone Frederike. A weak air stream means the cyclone's storms are moving very slowly across the region.

Rain and hailstorms were expected to continue into Sunday in the southwest.

Meanwhile, in the north of the country the sun was shining and summer temperatures of up to 28 degrees Celsius were expected to continue all weekend.

The weather service forecast a break in the weather for the start of the new week.