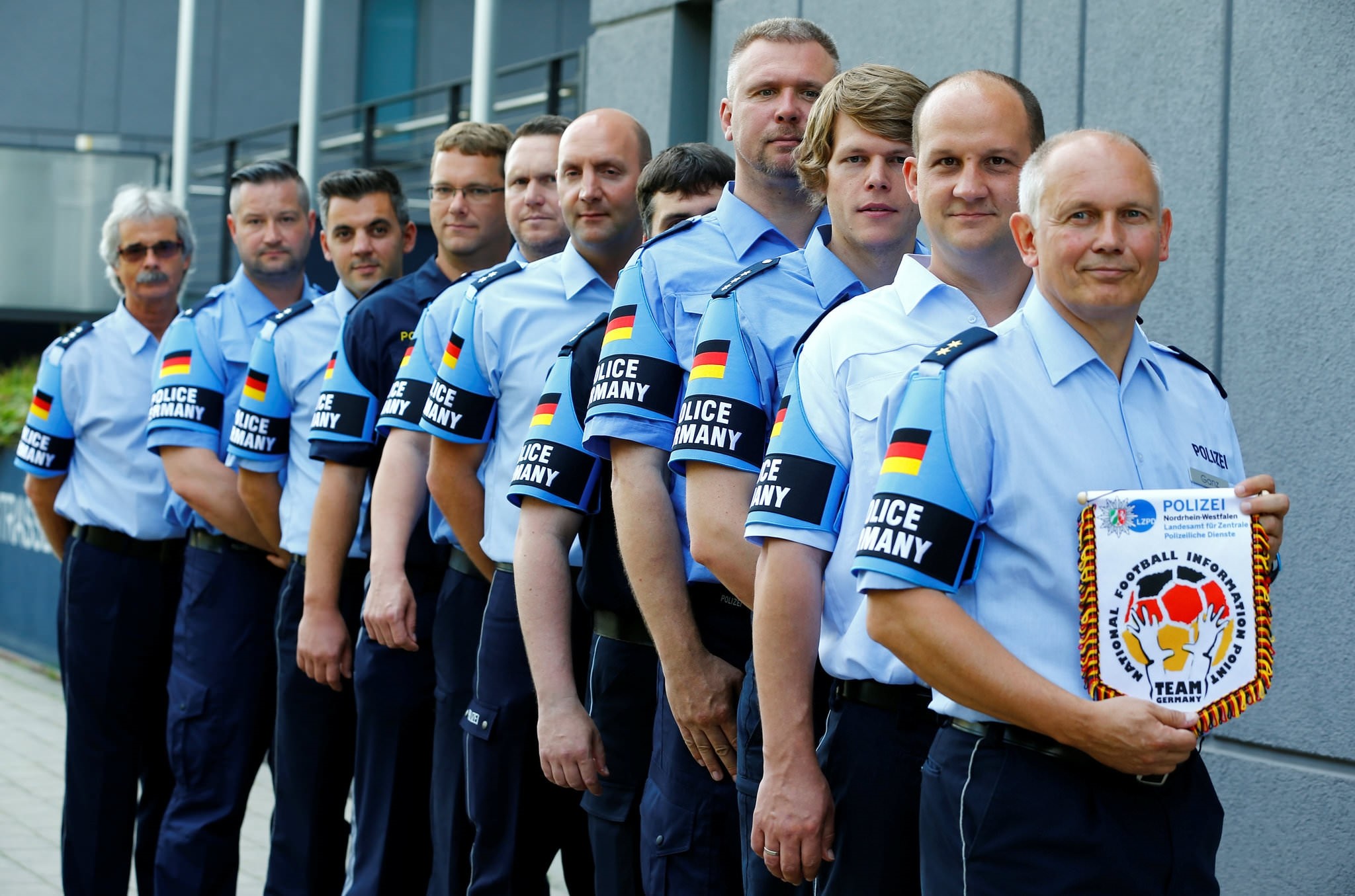 German police officers pose for an image with their armband reading ,Police Germany, at the North Rhine-Westphalian police headquarters in Duisburg, Germany, June 6, 2016.
by Daily Sabah with Agencies Jun 08, 2016 12:00 am

German federal police say officers being sent to France to help with security during the upcoming Euro 2016 football tournament will be able to carry their firearms.

Federal Police spokeswoman Nicole Bellinghausen on Wednesday confirmed a report in the Bild newspaper that, in addition to their sidearms, the German police will also be able to carry pepper spray and other such weapons, but said it was not unusual for them to be armed while assisting outside Germany.

She would not say how many German police would be sent to France for the month-long tournament for tactical reasons, but said they would be deployed in several locations primarily to help deal with German-speaking fans.

She says they'll aid French police at the border, on rail lines and other "selected French locations."

European states and the U.S. authorities have warned France over possible terror attacks on EURO 2016 venues.

Britain's Foreign Office warned fans traveling to France for the Euro 2016 soccer tournament on Tuesday that its venues are "potential targets for terrorist attacks."

The Foreign Office website, updated on Tuesday, advised fans to be vigilant at all times and follow the advice of French authorities.

Prime Minister David Cameron's Downing Street office said the updated warning was not in response to a specific threat, that it was being issued to provide relevant information for fans.

Meanwhile, Ukraine's state security service said on Monday a French citizen detained in late May on the Ukrainian-Polish border had been planning attacks in France to coincide with the Euro 2016 football championship it is hosting.

On Saturday, the Ukrainian border guard service reported that the unnamed 25-year-old had been arrested with an arsenal of weapons and explosives, including rocket launchers and Kalashnikov assault rifles, in his vehicle.

Last month, Germany's Federal Criminal Police Office (BKA) also said the Euro 2016 could be the target of terrorist attacks in a report leaked to the Bild newspaper.

Security officials in Europe have been on high alert since the November attacks in Paris that killed 130 people, and French and football officials alike have sought to quell concerns that the championship could be marred by violence. France's parliament voted to extend the state of emergency to the end of July to cover the Euro 2016 and Tour de France. The measure boosting security powers was already extended by three months in February until May 26. Because of fear of a heightened threat of terrorism and after several extremists said they wanted to attack the tournament, more security concerns surround the hotly anticipated Euro 2016 tournament.